Mr. Porcelli in a note to clients referenced Ms. Yellen's July 2014 comments about the price of biotech stocks being stretched – stretched so much that they have gained more than 20 per cent since, he said snidely. Ms. Yellen also warned about valuations in social media. That call doesn't look so bad, as anyone who owns shares in Twitter Inc. and LinkedIn Corp. can attest.

Anyway, all this distracts from the bigger picture.

By talking about stock prices, Ms. Yellen is not trying to impart investment advice. She is reminding the public that the Federal Reserve cares about financial stability as much as it cares about jobs and inflation. And the Fed apparently has become uncomfortable with equity markets that have raced to record levels despite only mediocre economic growth. For those keeping score, this counts as another reason for the Fed to raise interest rates. It is the one sure way the central bank has to skim away the froth.

Ms. Yellen's comments are welcome. They show that central bankers haven't forgotten about the financial crisis, even if most of the rest of us have begun to do so. Too few attempts were made to restrain the excesses of investors and traders ahead of the 2008 meltdown. The theory was that there was little a central bank could do to deflate an asset-price bubble, so policy makers might as well wait until a bubble pops and then clean up the mess as quickly as possible.

Central banks no longer think this way. The institutional view now is that if monetary policy can be used to reduce the risk of a calamity, it should be deployed to do so. Consider the Bank of Canada's shock interest-rate cut in January. Virtually all of the attention has been on Governor Stephen Poloz's contention that he needed to stoke economic growth to counter the collapse of oil prices. Yet the central bank stated clearly that it had another reason for dropping the benchmark rate: financial stability. The central bank couldn't rule out the possibility that plunging commodity prices would trigger a wave of unemployment, bankruptcy and foreclosure. By lowering interest rates, the central bank offered households an opportunity to reduce their borrowing costs, reducing the risk that the worst-case scenario would come to pass. If household debt is easier to finance, fewer people will fall behind on their payments, and banks keep lending. Crisis averted, or so it is hoped.

To be sure, there is reason to question just how seriously central banks take financial stability. Stock markets in the U.S. are where they are mostly because the Fed has pushed investors out of bonds. Ms. Yellen reiterated this week that investors are "reaching for yield," as interest rates attached to riskier assets such as junk bonds no longer are that much higher than those of safer fixed-income investments. This shows the limits of the Fed's ability to steer the economy. Policy makers would prefer to see more money going into financing infrastructure and business expansion. But for many investors, betting on economic growth is as risky as buying the bonds of a company with a poor credit rating. If the Fed wants to reverse that trend, it will have to make buying worry-free assets more attractive. That means lifting the benchmark lending rate for the first time since 2006 so bond yields rise.

This could go badly, which is why it is so important that Ms. Yellen continues sending clear signals that the Fed is ready to move. By sending out reminders that financial stability will factor into the timing of liftoff, the Fed chair is giving market participants advance notice that interest rates must rise sooner rather than later.

Her comments came amid suggestions that weaker economic indicators could allow the Fed to wait until 2016 to lift the benchmark rate. But only if a bubble bursts before Ms. Yellen manages to deflate them.

Special to The Globe and Mail Kevin Carmichael is a senior fellow at the Centre for International Governance Innovation, based in Mumbai. 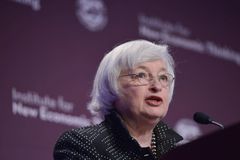