The Bank of Canada's top brass assured a parliamentary committee that Canada's bloated housing market has not become a risky asset bubble, despite the central bank's own calculation that house prices nationwide are roughly 20 per cent overvalued.

"We don't believe we're in a bubble," Bank of Canada Governor Stephen Poloz said in testimony Tuesday to the House of Commons Standing Committee on Finance. He said Canada's long-running boom in the housing market hasn't been underpinned by the kind of rampant speculative buying that is the hallmark of an asset bubble.

"Our housing construction has stayed very much in line with our estimates of demographic demand," he said. "There's no excess."

This despite the central bank's own estimate, published last December in its Financial System Review, that Canada's housing market is overpriced by between 10 and 30 per cent.

Mr. Poloz indicated that he believes the overvaluation is not a symptom of runaway prices and widespread investor speculation, but rather of ongoing strength in consumer demand spurred by historically low interest rates – rates that were cut by the central bank in order to keep consumer demand buoyant to support Canada's economy during the Great Recession.

"This is one of the byproducts of what we've been through. It's not something that happened simply by itself," he said. "It would be very unusual to have that and not have a degree of overvaluation."

Mr. Poloz added that the overvaluation doesn't necessarily mean the market is in need of a 10-to-30-per-cent downturn to bring it back into balance. He said that rising incomes as the economy gains momentum could help close the affordability gap, without a sharp drop in home values.

"We're not expecting whatever transpires in Alberta to create spillovers that would be, from a financial stability perspective, worrisome for the rest of Canada," she said.

In its Monetary Policy Report published two weeks ago, the Bank of Canada expressed concern that the oil shock's impact on Alberta's housing market, as well as the continued price booms in Toronto and Vancouver, "suggest a risk of a correction in these markets." It added that if all three of these major markets were to suffer a downturn simultaneously, "the spillover effects to the rest of the economy would be significant."

"On the surface, lower interest rates would be expected to promote more borrowing, which would increase this vulnerability," he said in his opening statement to the committee. "However, in the near term, lower borrowing rates will actually mitigate this risk, by reducing payments for mortgage holders and giving us more economic growth and employment gains."

Mr. Poloz added that he believes the January rate cut, which reduced the bank's key rate to 0.75 per cent from 1 per cent, is doing its job in helping the Canadian economy weather the effects of the oil shock – although he admitted that the evidence of the cut's impact "is thin at this stage."

"The evidence we have at present would be primarily in the export sector," he said, where the resulting decline in the Canadian dollar has been boosting exporters' Canadian-dollar cash flow and improving their price competitiveness in export markets.

Mr. Poloz reiterated that the non-energy segments of the Canadian economy are starting to assert themselves more strongly in the current quarter, as the impact of the oil shock that were felt in the first quarter and the 2014 fourth quarter begin to fade, and the pickup in non-energy export demand gains momentum.

"The segments of non-energy exports that we expected to lead the recovery are doing so, and we expect this trend to be buttressed by stronger U.S. growth and the lower Canadian dollar."

He repeated the bank's belief that the Canadian economy will bounce back from its estimated flat first-quarter growth starting in the second quarter, with momentum picking up even more in the second half of the year.

Mr. Poloz also defended his controversial use of the word "atrocious" to describe Canada's first-quarter economy in an interview with the Financial Times last month – a term many critics felt fuelled concern and confusion over Canada's economic state. 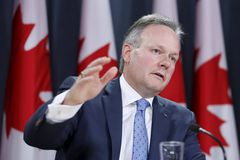