Mark Carney gave his last public speech as Governor of the Bank of Canada last Tuesday, and used that opportunity to speak about how well "Canada works."

He spoke about the success of monetary and fiscal policy during the financial crisis, and about Canada's resilient financial system. He explained how Canada's monetary union – unlike the one in Europe – has many essential characteristics that make it effective, such as labour mobility, fiscal transfers among regions, and relative wage flexibility. It was a good speech; sensible and clear.

The problem came at the end when Mr. Carney said "the challenge for Canada is to rotate the sources of growth toward net exports and business investment." He doesn't say why this will be such an enormous challenge, but he should have.

The four components of gross domestic product (GDP) are household consumption, investment (including new residential construction), government spending on goods and services, and net exports. Mr. Carney's statement about the need to "rotate" growth toward exports and business investment is essentially a statement that consumption, residential construction and government can no longer be viewed as sources of growth.

The high levels of consumer debt suggest that consumers cannot be relied upon to fuel economic growth in Canada. And the current frothy state of the Canadian housing market, combined with Finance Minister Jim Flaherty's actions on mortgage policy, suggest that it is neither desirable nor realistic to expect residential investment to be a driving force. Similarly, most governments in this country are trying to get back to fiscal balance within a few years, and this requires either trimming spending or raising taxes, neither of which contribute to growth in the short run.

So with these growth components off the table, it must be exports and business investment that recover, right? Wrong. There is another possibility, one quite unpleasant to consider. Nothing guarantees that Canadian GDP will return to its potential level over the Bank's planning horizon, although the Bank's projections almost always show this happening.

Unfortunately, it is entirely possible that exports and business investment don't fully recover and that the Canadian economy continues growing slowly, but not enough to close the output gap for several years. Meanwhile, unemployment would decline only slowly, if at all, and the really unlucky people would be those stuck in part-time work and other forms of underemployment.

Such a slow-growth outcome is surely possible, but is it realistic? Actually, yes.

One of the graphs accompanying Mr. Carney's speech shows that Canadian exports are $133-billion (about 8 per cent of GDP) below the historically normal post-recovery path, and this is for good reason. The U.S. economy is still lurching its way through an economic recovery, and its housing market is especially weak, with housing starts still roughly 70 per cent below the 2006 peak. In addition, the European economies are collectively in recession and are showing no signs of transiting into recovery. Given this external environment, there is little reason to think that Canadian exports will recover soon – certainly not before the U.S. and other foreign economies recover.

What can the Bank of Canada do to improve the prospects for Canadian exporters? As long as the Bank keeps focused on its inflation target, and resists any temptation to intervene in foreign-exchange markets, the answer is, nothing. Not a popular answer, I realize, but it has the advantage of being true.

How about Canadian business investment? Prospects here aren't much brighter. Slow growth in the United States, combined with the massive uncertainty coming from Europe, provide great excuses for firms to sit on their hands, and delay or rethink entirely their investment plans. In the Bank of Canada's April Monetary Policy Report, survey data showed that more than two-thirds of Canadian firms indicated that domestic/global demand, sector-specific issues, and taxes/regulations were affecting their investment decisions. Only 10 per cent suggested that access to credit was an issue.

If access to credit were the problem, the Bank could reduce its already low policy interest rate and maybe have a small effect. But with today's environment of extreme uncertainty and lack of global demand, and firms that don't view access to credit as a binding constraint, monetary policy doesn't have much to offer.

What this all means to me is that we shouldn't be counting on a recovery in exports or business investment in the next few years. We should be hoping for one, certainly, but let's not count on it. Instead, we need to come to grips with the possibility that the Canadian economy will be in a low-growth phase for a while yet. And in the meantime, we should be thinking more carefully about who really bears the burden of a slow-growth economy, and contemplating policy adjustments in that direction.

Christopher Ragan teaches economics at McGill University and holds the David Dodge Chair in Monetary Policy at the C.D. Howe Institute in Toronto.

With Carney set to leave, calls grow for shift in rate stance
May 27, 2013 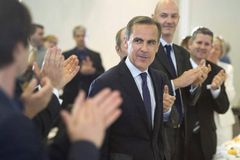