"I was on this committee a long, long time and never knew where the Federal Reserve was until chairman Bernanke became the chairman of the Fed."

That was congressman Mel Watt's way of paying tribute to U.S. Fed chairman Ben Bernanke at the House Financial Services Committee this week.

Time and again, lawmakers such as Mr. Watt praised Mr. Bernanke, who testified at the House of Representatives Wednesday and at the Senate Banking Committee Thursday, for making monetary policy understandable.

"He speaks in plain language as opposed to some of the prior chair who tried to make everything seem so complicated," said Mr. Watt, a Democrat from North Carolina.

Mr. Bernanke likely will be remembered for three things: QE1, QE2 and QE3. His bigger contribution is demystifying the world's most important central bank. At a time of crisis, he believed in fighting panic with more information, not less. It's hard to believe, but the Twitter age had taken hold and the Fed still didn't do press conferences. Mr. Bernanke changed that.

He wasn't the first to use explicit forward guidance as a policy tool, but he was the first to convince the Fed's policy committee that it was a good idea. And as much as we in Canada like to boast about the Bank of Canada's conditional commitment to keep its benchmark rate at 0.25 per cent for about a year during the crisis, we know it doesn't really count until the Americans do it. Mr. Bernanke then pushed Canada's idea forward by linking its next interest rate move to economic indicators rather than the calendar. As he re-emphasized Thursday, the Fed has no intention of even thinking about raising its benchmark rate until the unemployment rate drops to 6.5 per cent.

For some reason, there still are critics who seem to equate less information to greater clarity. A Bloomberg News editorial grumbled Thursday that the Fed's guidance has too many numbers in it. "Forward guidance that has to be elaborated and refined every time a central banker speaks is, at best, useless," the Bloomberg editors wrote.

The critics of forward guidance continually miss a central tenant of the strategy. Unlike former central banking titans such as Alan Greenspan and Jean-Claude Trichet, the current generation isn't trying to tell investors what to do. Rather, Mr. Bernanke, the Bank of England's Mark Carney and others are simply revealing their best analysis about the future. They set out guideposts and assume sophisticated traders, investors, and executives are able to follow along. As Mr. Bernanke has said many times, Wall Street has access to the same data as the Fed. Things need not be so difficult.

Bloomberg's editorial board and others would like to blame the Fed for the sharp jump in interest rates in recent weeks. They say Mr. Bernanke confused markets by having the audacity to suggest the Fed might be able to slow its monthly bond purchases later this year because the economy was getting stronger. This should have surprised no one. Why? Because a critical mass of indicators showed the economy was getting stronger. Nothing Mr. Bernanke said should have caused panic.

In fact, Mr. Bernanke isn't convinced it did. When asked by a senator to explain the jump in interest rates, Mr. Bernanke said it could reflect stronger economic growth. (As the economy strengthens, assets with fixed returns become less attractive, making them cheaper. When bond prices fall, their yields rise to attract buyers.) Mr. Bernanke also said the increase represents an unwinding of leveraged and "excessively risky" bets, which is "probably a good thing" although "the tightening that's associated with that is unwelcome."

Mr. Bernanke also was asked Thursday whether the Wall Street consensus that the Fed would begin tapering its asset purchases in September was accurate. "What we're looking for is a pick-up as the year progresses," Mr. Bernanke said. "We're going to look at the data. It's a committee decision. It's going to depend on whether we see the improvement which I described."

When the Fed introduced its third round of asset purchases in September, it said it would create $85-billion (U.S.) a month to buy treasuries and mortgage-backed securities until it detects a substantial improvement in the outlook for the labour market. The Fed has offered plenty of context on what indicators it will be following: monthly payrolls and the unemployment rate, to be sure, but also the participation rate, and measures of underemployment and long-term unemployment.

Mr. Watt has been able to figure it out. The Masters of the Universe should be able to, too. 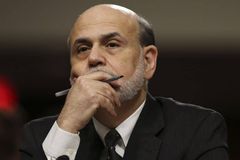