As a Serious Economist, I had been happily ignoring the recent bitcoin frenzy, safe in the smug knowledge shared by all Serious Economists that the surge in bitcoin value is a bubble that will soon pop.

Recently, however, my own protective bubble was shattered as I was walking through a large American airport and I bumped into an old friend. This friend (let's protect the innocent and call him "Eric") is very mathematically inclined. I consider him a tremendously smart fellow. While we were catching up, Eric told me that he is going to make a killing on his bitcoin holdings. He is Canadian and hence too humble to have told me how many coins he had already accumulated, but I gather he has quite a collection.

I cannot explain why, but ever since then I have felt it is my personal mission to help pop the bitcoin bubble. I have nothing against Eric in particular or imaginary currencies in general, but the faith people are putting in this newfangled tulip mania basically drives me bonkers.

Like my friend Eric, many people are holding (or buying) bitcoins purely based on their hope that their value will go up. Serious Economists call this The Greater Fool Theory: Eric is hoping his "asset," the bitcoin, will appreciate in value simply because someone else will come along who is willing to pay more for it than he did. This is a terrible reason to hold any asset, least of all an imaginary currency.

Since sentiment waxes and wanes with the wind, the value of a bitcoin can fluctuate by 50 per cent within a day. When a consumer plans on making a purchase and has a ballpark in mind of the number of coins she needs to set aside, and then a few hours later she has to double that number, it's a bit of a problem. No consumer appreciates that kind of uncertainty.

Until recently, governments have turned a blind eye to bitcoin transactions, much akin to the way they are aware of but ignore offshore online gambling and basement poker games. It has now become apparent, however, that central banks and developed countries are becoming increasingly wary of bitcoins. For example, the French central bank has warned against the use of bitcoins and China has announced that it is restricting local bitcoin exchanges from receiving deposits in yuan. Demand from the world's most populous country has been driving much of the bitcoin price runup, so the announcement of this development took a considerable toll on the value of a bitcoin.

Lack of official government involvement is viewed by some bitcoin proponents as an advantage, but it is turning into an obstacle. Without legislation that enables the use of bitcoins for everyday transactions across economic and financial markets, bitcoins will be relegated to the black market.

Speaking of which, for the most part, the only available ways to spend bitcoins at the moment are for illegal drugs, gambling and gaming, web hosting services and space travel. (You can't make this stuff up!) This makes bitcoins less than useful to the average consumer. Nevertheless, Canadians can easily acquire bitcoins at the world's first bitcoin ATM, in Vancouver, and a newly opened bitcoin ATM in Toronto.

And then there is the murky history of the bitcoin. Legend has it that the bitcoin and its underlying technology were developed by "Satoshi Nakamoto." While there are some theories about who this person might be, no one knows for certain. And we don't know what his/her real motives might have been, which is a bit disconcerting.

The myriad currencies we have at our disposal are doing fantastic work fulfilling their jobs as mediums of exchange, stores of value and other traditional currency roles. Why, exactly, do we need bitcoins, given all their vulnerabilities?

So what would it take for bitcoin to gain real, um, currency? For starters it would need the backing of a large, reputable institution or government. You know, like the U.S. Federal Reserve System. Or Canadian Tire.

Lisa Kramer is an associate professor of finance at the University of Toronto. You can follow her on Twitter @LisaKramer. 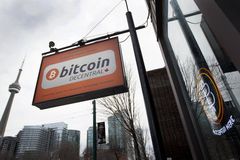