There always was something a bit odd about talk of Canada as an energy super power.

Countries such as Saudi Arabia and Russia reach super power status by shipping their energy far and wide, gaining influence they might not otherwise have.

Canada, really, is little more than a sole-source supplier to the United States. And quite suddenly, the U.S. isn't sourcing as much as it used to, shifting instead to a rapidly growing domestic supply of oil and natural gas. Domestic production in the U.S. of primary energy has increased 18 per cent in the past three years to a record. Growth in domestic supply of oil, natural gas and electricity is growing faster than domestic demand.

The U.S. energy boom is kryptonite to Canada's super power ambitions. National Bank chief economist Stéfane Marion has compiled the evidence. The U.S. Energy Information Administration's forecast for energy imports in 2020 is 22 per cent lower today than in 2008. The shift is on. Canada's energy exports, by volume, are down by 14 per cent from their peak earlier, Mr. Marion calculates.

"None of the Canadian provinces can ignore the profound changes under way in the U.S. energy sector," Mr. Marion wrote in a report last week. "It is of the utmost importance for Canada to redefine its energy strategy and adapt to the new reality."

This reality explains the sudden interest in running a pipeline from the oil sands to New Brunswick, which would give Eastern Canada access to cheaper Canadian crude. Talk of exporting energy to Asia also will heat up. When your main customer starts producing in-house, you have little choice but to find new customers. The only other option is scaling down.

Alberta isn't the only province affected by the U.S. energy boom, but it's the primary one. The province's premier, Alison Redford, told me in an interview on the weekend that she intends to use next month's budget to invest in Alberta's non-oil economy. She insisted that her government will succeed where others have failed and foster an economy that doesn't rise and fall with the price of crude.

But she's not sure that all is lost in the United States.

Ms. Redford was in Washington to build support for the Keystone XL pipeline, which would ship northern Alberta's oil to Texas for processing. I asked her how talk of energy independence in the U.S. affected Alberta's prospects. Her response was a micro-economic rebuttal to Mr. Marion's macro-economic analysis.

The premier said she's watching another trend. The oil being produced in the U.S. is light crude. The U.S. refineries on the Gulf Coast of Mexico were built to handle Venezuelan crude, a heavier grade of product that is similar to what comes out of the oil sands. Ms. Redford said industry analysts aren't convinced all that infrastructure will be allowed to go idle simply because the U.S. is a big producer of light crude.

"People are watching to see whether or not what we are seeing in higher production of light crude doesn't start to balance out a little bit in terms of where the existing energy infrastructure is and how you need to keep supporting economies in those places," Ms. Redford said. "In the medium and long term you might see things balancing out again ... That's what I'm watching."

Worth watching, to be sure. But that still suggests that making money simply by shipping energy to the U.S. isn't going to be as easy as it used to be. And as Mr. Marion points out, the issue is bigger than oil and natural gas. The U.S. is on track to need much less of Quebec's and Atlantic Canada's electricity, as the country generates more and more power from renewable sources and natural gas.

Mr. Marion says Canada must "rapidly redefine its energy strategy." As it happens, so does Ms. Redford, who has been pushing for one for about as long as she's been premier. Expect a greater number to begin taking her call seriously. 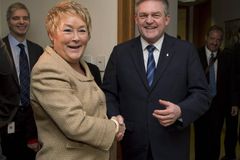