Movement towards road vehicle automation has been potentially the most revolutionary development in transportation during 2012. Transport research institutes in many countries and several car manufacturers have reported progress. The pacesetter in driverless technology is Google Inc., working through Stanford University's Artificial Intelligence Laboratory.

Google has a fleet of more than a dozen what it calls "self-driving cars" that by August, 2012, had completed some 500,000 kilometres of testing. "They've covered a wide range of traffic conditions, and there hasn't been a single accident under computer control," explained Google's official blog. Other terms used are driverless cars, autonomous cars, robocars, and cybercars. (The term "automobile" is rarely used for road vehicles that don't require a human operator.)

What caught particular attention during 2012 were authorizations to deploy or move towards deploying autonomous vehicles on the roads and highways of six U.S. states (Nevada, Florida, California, Hawaii, Oklahoma, and Arizona), with several more jurisdictions in the U.S. – none in Canada – being approached by Google and other interested parties. Road testing is also being conducted in several European countries, and much relevant work is occurring in Japan, and China.

There's been opposition to these moves. During a race for the Republican nomination as a candidate for a seat in Florida's senate in the November elections, one contestant's advertisement attacked a rival's support for self-driving cars. This resulted in a media article with the headline: "Florida political ad suggests that self-driving cars will be the death of grandma." The supporter of self-driving cars won the nomination and then the senate seat.

Surveys on attitudes to driverless in North America and Europe suggest an age divide: young people welcome them; older people do not. Here are some typical results, these from a poll of UK adults from a poll conducted for Bosch, a maker of automotive parts:

In spite of their relatively strong opposition to driverless cars, older people welcomed having automatic safety features and driving aids in regular automobiles almost as much as younger people (63 per cent vs. 71 per cent).

At the September, 2012, signing of California's bill concerning autonomous vehicles, Google co-founder Sergey Brin said the company "will have autonomous cars available for the general public within five years." The Japanese government has set the goal of having driverless cars on public roads during the early 2020s. Members of the authoritative Institute of Electrical and Electronics Engineers (IEEE) anticipate that driverless cars will account for up to 75 per cent of cars on the road by 2040.

The technology seems presently ahead of the law, which mostly requires one or more operators to be in a car even though it is driven by a computer, and which does not yet address who would be responsible if a computer-driven car were indeed to cause the death of a grandmother.

My guess is that for insurance and other reasons, autonomous cars will initially be managed by fleet-owners who will use them to provide a taxicab service. You'll order an autonomous taxicab (AT) on your smartphone, specifying destination, number of passengers, and amount of baggage. You'll negotiate exact pick-up and set-down locations with the dispatch computer and the time of pick-up (by spoken interaction or keyboard). An appropriate vehicle will arrive at that time and take you to your destination. When passengers and baggage have been unloaded, the vehicle will be available for a new assignment. For large loads, whether passengers or baggage, two ATs might arrive, linked electronically to travel together to the destination.

Google has hinted that it may see car-sharing as the primary business model for its driverless car technology. The above-noted statement by IEEE members suggested that driverless cars will be much used in car sharing programs. A car-sharing service using driverless cars and an AT service amount to essentially the same thing.

ATs would be better than the taxicabs we have now in three ways, and worse in one.

The startling advantage of ATs would be their low cost. I estimate that a typical fare structure within an urban area (in today's dollars) could be a $1 hiring charge and then 15 cents a minute and 10 cents a kilometre. Thus, a five-kilometre journey at an average speed of 30 km/hour (i.e., taking 10 minutes) would cost $3 (60¢/km). This would be about the same as transit fare for one traveller and less than transit fare if there were more passengers. A ten-kilometre trip at the same average speed would cost $5 (50¢/km) – less than the transit fare for two people travelling together. Rates could be higher or lower according to the time of day and the size of the vehicle requested.

The per-kilometre rates are instructive when compared with the costs of owning and operating a car, which for cars less than four years old average about 55¢ per kilometre driven. For many – younger people in particular – relying on a well-managed and comprehensive AT service could be more appealing than owning a car, or a second or third car. This would be not only for the lower overall cost of using ATs but also because of their convenience and flexibility. ATs will carry people door-to-door, will not have to be parked, will be available for use by people who cannot or should not drive, and will take the form of a wide variety of vehicles according to demand.

ATs need not be only for urban and suburban areas, although that may be where they are first deployed. A Google consultant has suggested that ATs (or individually owned driverless cars) could compete on journey time and convenience with high-speed rail for trips other than station to station­ at much lower public cost.

On expressways, driverless cars will be able to be platooned at high speed, bringing energy costs down by about a third. The cost of a five-hour, 500-km, door-to-door AT trip from Toronto to Montreal for one or more people could be less than $85 (assuming the AT could be hired in Montreal before being assigned to a return trip), compared with typical station-to-station costs per person of $50 by bus, $100 by train, and $200 by air. For longer trips, ATs with beds and washrooms could be available at a premium.

In upcoming posts, I'll explore the implications of vehicle automation for car ownership, the auto industry, freight movements, and transit planning, as well as for energy use and the environment. 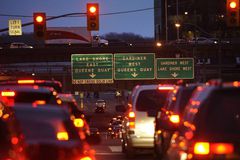 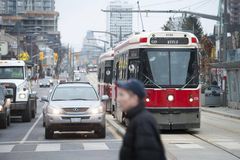 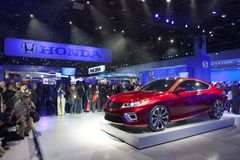