It's been an unusually hot summer, and soaring temperatures have boosted sales of that quintessential summer food, ice cream. But Baskin-Robbins has decided to shut its production facility in Peterborough, Ont., and lay off 80 workers because of...wait for it... increased demand!

From the department of "wait, what?", here's the scoop behind this brain-freeze-inducing decision.

Baskin-Robbins, home of 31 flavours (one for each day of the month), brought in $1.8-billion in sales from its 6,777 outlets around the world last year. Same-store sales rose by an impressive 9.4 per cent in the first quarter 2012, and that's before the heat wave.

Though business is up, the company says expanding production is not part of the game plan. Peterborough is the last place in North America where Baskin-Robbins makes what it sells, and those 80 workers supply a third of the 4,200 outlets outside of the U.S., including 113 Canadian stores.

That production is now moving to third-party suppliers. Canadians' demand will be supplied by Scotsburn Dairy in Truro, N.S. -- for now. Like Peterborough, it's also a union shop. But most of what Peterborough produced will now be made in El-Paso, Texas, a right-to-work state with no minimum wage. Only 5.3 per cent of workers are union members in that state.

Does that make Baskin-Robbins the Caterpillar of Peterborough? Not so fast.

The world's biggest chain of ice-cream stores already operates in 110 nations, and believes future expansion of global domination can best be achieves by focusing on retailing and franchising. They are getting out of manufacturing.

Getting out of manufacturing is one way to drive down costs, by shifting labour-cost decisions to third-party suppliers.

Baskin-Robbins' plan goes further: drive down costs by extending its presence in emerging markets, where disposable income is increasing; but, importantly, that's where new suppliers are emerging too.

Call it the Walmartization of ice cream. When you're big enough globally, you don't have to make things to change the way things are made. The size of the contracts you're waving around changes the game. The retailer, not the producer, becomes king of the deal. And the lowest price becomes the law.

Suppliers swallow ridiculously low per unit prices because the bottom line of that contract is huge. Then they find a way to shave their own costs. So Baskin-Robbins lowers its costs by shifting the incentive to find savings onto parties outside the company. Shift costs, increase profits. That's the formula these days.

And here's another part of the formula: Baskin-Robbin's parent company is Dunkin' Brands, which is owned by Bain Capital - Mitt Romney's company before he became Presidential hopeful for the Republicans. These firms, and Romney, have been lobbying against supply management, angling for lower dairy prices to help us all get fatter on pizza and ice cream, one crazy-cheap mouthful at a time.

Lower dairy prices are indeed on the menu of free trade deals like the one now being negotiated with Europe and upcoming talks with the Pacific nations, which will most likely see an end to supply management of the dairy industry in Canada. But there's still cheaper milk products to be found in other nations. And that's the point of this drive for global dominance in ice cream. Market-spanning giants like Baskin-Robbins, relentlessly driving down input costs, give a whole new meaning to free trade. But remember the other trade: the flip side of low prices is low wages. Someone's paying the price somewhere. 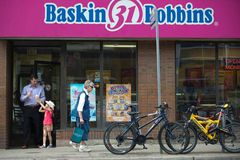