On the surface, there's as little reason as ever to feel hopeful about the U.S. budget.

Republican lawmakers again are insisting that President Barack Obama will have to give them something to get renewed borrowing authority, heralding another summer showdown over the debt ceiling.

The Democratic-led Senate and the Republican-led House of Representatives are in a standoff on how to go about reconciling their separate budget proposals. (That's right, how to negotiate. Senate leaders want to go straight into a traditional conference, where proposals approved in each chamber are debated until there is a compromise. House leaders are holding out for a "framework" agreement that would commit both sides to achieving broad goals, such as aggregate spending cuts.)

But don't despair too much – at least not yet. American politicians have the luxury of a little time to sort out their budget mess because the deficit – which not so long ago represented one of the scarier threats facing the global economy – is closing remarkably rapidly.

In all likelihood, the Congressional Budget Office on Tuesday, when it releases its latest projections, will revise its outlook to show the U.S. government is on track to narrow its budget shortfall to at least 4 per cent of gross domestic product within a couple of years.

That still would be on the bloated side, but within striking distance of a deficit-to-GDP ratio of 3 per cent that economists generally say is manageable. After sliding into the red from a surplus in 2001, when the U.S. recorded a small budget deficit, Washington has recorded a deficit of less than 3 per cent of GDP only once, in 2007.

The Treasury on Friday said the U.S. recorded a budget surplus of almost $113-billion (U.S.) in April, nearly double the surplus of a year earlier. This was primarily a revenue phenomenon, as receipts were 27.6 per cent higher last month than in April, 2012. Spending was 13.1 per cent higher.

Wall Street economists last week were lowering the budget estimates ahead of the CBO revisions. Jim O'Sullivan at High Frequency Economics now projects a deficit in the current fiscal year of $750-billion, or 4.7 per cent of GDP, and $575-billion in the fiscal year ending Sept. 30, 2014, or 3.4 per cent of GDP. Barclays Capital also sees a $750-billion shortfall in 2013, but is less optimistic about 2014, predicting a $650-billion deficit that would equal 3.9 per cent of GDP.

While spending growth has slowed, it is revenue that is driving the U.S. fiscal turnaround. The politicians have the Federal Reserve to thank. The primary aim of the Fed's ultralow interest rates and bond-buying program is to stoke the stock market. It is working, and increased stock prices mean increased revenue for the Treasury from taxes on capital gains. More people also are working. The result is receipts from individual taxes so far this fiscal year that are 20 per cent higher than over the same period a year ago. Revenue for taxes on corporate profit is running 21 per cent higher than at the same point in 2012.

The faster-than-expected narrowing of the U.S. deficit hasn't really crept into the budget narrative in Washington. Politicians still are presenting the budget debate as if the country is on the edge of a precipice.

That's because the U.S. political system needs a crisis to spur action. The crisis could come – unless changes are made to federal health and pension programs, the U.S. budget deficit will explode again in a decade or so. But for now, the danger appears to have passed. 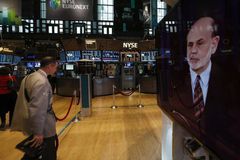