Greeks have been pulling their cash out of banks at an accelerating pace in recent days as fears grow that the country will leave the 17-member euro zone.

A bank run wouldn't only be a problem for Greece, which installed a caretaker government Wednesday to keep the country functioning until new elections, set for June 17.

Europe's wavering commitment to Greece is shifting investor angst to the other weak links in the region, including heavily indebted Spain, Italy and Portugal. So far, bank deposits are holding steady in those countries, but the financial health of their banks remains shaky.

Worried that contagion is already spreading far beyond Greece, Spanish Prime Minister Mariano Rajoy called on his euro neighbours to issue a "clear, forceful message of support for the euro and for the sustainability of the debt of all countries where that is currently in doubt."

Government borrowing costs spiked in Spain and Italy this week as investors demand a premium for lending them money. Rates on 10-year bonds eased slightly Wednesday – to 6.25 per cent in Spain and 5.98 per cent in Italy – but they remain near record spreads compared with German government bonds.

In Ottawa, Finance Minister Jim Flaherty warned that Europe is at a "turning point" and the survival of the common currency is at risk.

"They have to do the right thing – use some of the taxpayers' money to bail out some of the weaker members of the euro zone – or start moving away from the euro zone and say this was just an experiment that has not worked," Mr. Flaherty told CTV television, later repeating his remarks to the Senate finance committee.

Holding the euro zone together depends on bailing out faltering "neighbours," such as Greece.

European leaders, including German Chancellor Angela Merkel, insist they too want Greece to stay in the euro. But it's not clear what will happen if, as polls suggest, Greeks elect a government next month determined to ignore the tough austerity conditions attached to its €130-billion ($167-billion) bailout.

Highlighting the precarious shape of Greece's banks, the European Central Bank suspended lending to four undercapitalized Greek banks Wednesday, forcing the institutions to turn to the Bank of Greece, the country's own central bank.

Greek President Karolos Papoulias said citizens are withdrawing their money due to "fear that could develop into panic."

A bank run is the last thing Greece needs right now as it struggles to maintain stability ahead of the June 17 election, triggered by the failure of warring political factions to cobble together a coalition after elections in early May.

"Deposits are essential for a stable banking system," said Bank of Montreal senior economist Benjamin Reitzes. "If you get a run, it can cause significant difficulties."

Mr. Rietzes said depositors are spooked and that fear is reverberating across Europe. Abandoning the euro would mean converting those euros into a weak national currency, the drachma.

"If you thought your country was going to leave the euro and switched into a currency that may be worthless, what are you going to do? Dig it out and go somewhere else," he explained.

On Monday alone, Greeks pulled €800-million out of their banks, accelerating a steady decline in deposits that began when the country's debt crisis erupted in 2009. Withdrawals have been running at about €2-billion to €3-billion a month over that period, but the pace jumped to €5-billion in January.

Like Ms. Merkel, ECB chief Mario Draghi insisted the central bank has "a strong preference" that Greece will continue to stay in the euro.

"We don't think it will happen next week. but we believe it will happen," he said on a conference call. "The inclusion of Greece in the euro project was a profound error." 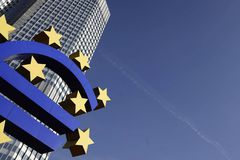 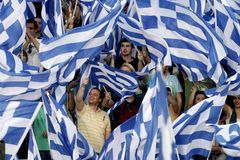 German frustration builds with no end in sight for Greek woes
May 15, 2012