Hopes of keeping the credit crisis walled off are dimming as markets ramp up the pressure on more countries, and would be damaged severely should any of the votes go the wrong way. Market concerns would likely further flare because investors are attuned to any chance that budget cuts and bailouts could be derailed.

Thursday, Britain holds a general election, which opinion polls show is likely to yield a minority government that will face questions about its ability to cut costs and reduce the country's debts. Friday, the German parliament faces a vote on the first instalment of that country's key €22-billion ($29.1-billion) contribution to the Greek aid package, which is highly unpopular with the German populace. The Greek government must also vote to pass austerity measures, which it hopes to do later this week.

The deepening crisis rocked global markets again Wednesday, at one point driving the euro to its lowest level in 14 months against the U.S. dollar. Some European stock markets fell by up to 4 per cent, and the yields on Greek, Spanish and Italian bonds continued to climb.

Even a report that four German professors filed a long-shot lawsuit seeking to stop the German contribution spooked markets, which "underscores how sensitive the markets are currently to the risks involved in the execution of the package," Otis Casey, an analyst at Markit Group, which tracks credit markets, said in a report. "Imagine multiple lawsuits across multiple jurisdictions."

German policy makers are pushing hard for the passage of the bailout measures, and the expectation is still that the plan is approved. German Chancellor Angela Merkel went so far Wednesday as to say that the very future of Europe is at stake.

"There is a threat of grave contagion effects for other member states in the monetary union and increasing negative feedback loop effects on capital markets," European Central Bank council member Axel Weber said. "All in all, Germany's contribution to the aid package for Greece is justifiable."

The Greek vote is expected to pass because the government has a majority. Still, lawmakers will have to vote knowing that they face growing protests against the austerity measures tied to their bailout, which turned deadly during a general strike Wednesday when rioters torched a bank, leaving three people dead, according to reports.

"The government's determination will surely continue to be tested in the streets" of Greece, Juan Esteban Valencia, a London-based credit strategist at Société Générale, told clients.

The British vote is the one that could signal a new stage in the crisis. If markets determine in the wake of the vote that the U.K. government is too weak to enact required cuts, British bonds could come under pressure.

For the first time in the 28-year history of trading in futures on British bonds, the market will stay open overnight on election night to allow investors to react to the election returns in real time.

A selloff in Britain would signal a move of the contagion beyond the southern European countries of Greece, Portugal and Spain into one of the world's largest economies.

Already, countries that had been accepted as stable are coming under a bit of pressure. The cost of insurance against debt default by Denmark, the Netherlands and Sweden jumped on Wednesday, according to CMA Datavision.

The final line of defence this week should any of the votes fan the flames of contagion may be the European Central Bank.

The ECB also meets during the crucial window at the end of the week. Analysts say the central bank may be forced to deploy countermeasures reminiscent of those used in the global credit crisis, such as purchasing government bonds.

Markets roiled on fears Greece's 'bushfire' will spread
May 1, 2018 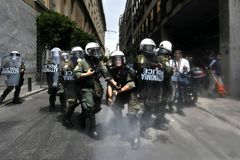 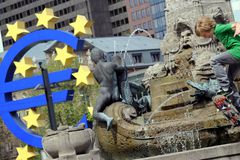 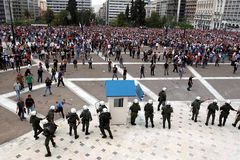 Opinion
The Greeks are unique, but not by EU standards
May 8, 2018 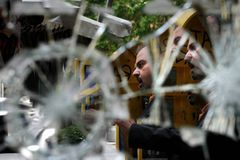