Bank of Canada Governor Mark Carney has taken a rare swing at corporate Canada, accusing companies of sitting on huge piles of "dead money" that should be invested productively or returned to investors.

Mr. Carney acknowledged that companies are wary about the global economy's prospects because of debt problems in Europe, but he said Canadian executives are underestimating the resolve of the central bank and other authorities to guard against a financial crisis.

Answering questions after a speech to the Canadian Auto Workers, Mr. Carney suggested that with hundreds of billions of dollars in their bank accounts, Canadian firms aren't doing enough to drive economic growth and create new jobs.

"The level of caution could be viewed as excessive," he said. Referring to corporate managers, he added, "Their job is to put money to work and if they can't think of what to do with it, they should give it back to their shareholders."

It's unusual for a central banker to criticize the country's corporations and the executives who make the key decisions. But his comments appear to reflect frustration with what he perceives as a lack of investment in some sectors of the economy.

Statistics Canada numbers show Canadian non-financial corporations with a cash hoard of $526-billion at the end of the first quarter of 2012, an increase of 43 per cent since the recession ended in 2009.

Some firms have staggering amounts of cash on hand. Suncor Energy Inc. has $5.2-billion, Teck Resources Ltd. has $3.6-billion, Inmet Mining Corp. has $2.7-billion, and Bombardier Inc. has $2.5-billion, according to figures compiled by Bloomberg.

Every company's situation is different, and some are preparing to build new mines or factories or to dole money out in research and development. Others are spending aggressively as cash pours in. Magna International Inc., for instance, which has about $1.4-billion (U.S.) in cash on hand, has increased capital spending to record levels this year.

"I don't see cash on our balance sheet as 'dead money' at all," said Magna's chief financial officer, Vince Galifi. "We intend to deploy cash as the appropriate opportunities arise. And we are a strong cash generator, so we expect to be able to put cash to use and still be able to maintain our balance sheet strength. ..."

Some executives said it is no surprise that their compatriots are cautious about spending, especially since many companies had near-death experiences in the recession – or thought their sources of financing might collapse.

"Corporate guys have come through such a frightening scare in 2009, where they were getting out of bed every day not knowing if they were going to have a bank," said Matt Campbell, CEO of Rocky Mountain Dealerships Inc., a Calgary-based chain of construction and agriculture equipment dealers.

"A lot of people are still pretty concerned that a second shoe might drop with Europe....And what happens if the U.S. goes back into recession? These people are just being prudent."

Mr. Campbell said it is odd that Mr. Carney, who has a reputation as a conservative central banker, is pushing companies to spend more freely. "Canada survived through this crisis because [companies] had reserves and equity," he said. "The last I checked, the best equity is cash in the bank."

Others say Mr. Carney is right, although returning money to shareholders through dividends or share buy-backs should take a back seat to investing for growth.

"I would agree that Canadian companies need to spend more and invest more on productivity to become more globally competitive," said David MacDonald, CEO of Toronto technology services firm Softchoice Corp. Part of the problem, he said, is that many Canadian institutional investors are very conservative, and encourage companies to pay dividends or buy back shares rather than investing in growth.

Andrew Snelgrove, CFO of Halifax-based investment company Clarke Inc., said many undervalued acquisition targets are available for companies that have cash and are willing to spend it. "There are opportunities out there to take advantage of," he said. "Sitting on cash is not a great idea right now."

Mr. Carney's remarks reflect his broad worry that Canada is doing too little to become a competitive force in the global economy. He reiterated his view that Canadians are spending money on houses that should be used for more "productive" purposes, and that the country trades too little with the fast-growing emerging markets.

"We cannot grow indefinitely by relying on Canadian households increasing their borrowing relative to income," Mr. Carney said in his speech.

The central bank chief dismissed the CAW's contention that the Canadian dollar's strength is hurting exports. On the contrary, Bank of Canada research suggests that the dollar's appreciation accounts for only about 20 per cent of Canada's export decline. The main reason Canada is running a trade deficit is that it is "overexposed" to the United States, where gross domestic product will be $1-trillion smaller in 2015 than pre-crisis estimates, Mr. Carney said.

"We cannot devalue ourselves to prosperity," Mr. Carney said in his speech, his first address to a labour group. The audience stood and applauded twice during the speech – even though the CAW says the level of the dollar, which Mr. Carney can influence, is damaging the manufacturing industry.

- With reports from Carrie Tait and David Parkinson 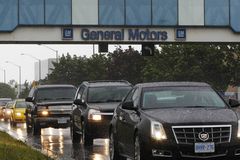 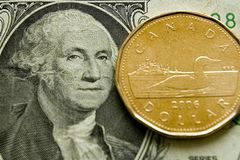 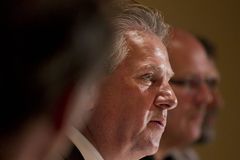