This is part of an occasional series on Canada's economy and its shift away from resources. Catch up on previous stories at tgam.ca/neweconomy.

A little more than a decade ago, Wade Barnes, a self-described “farm kid” from central Manitoba, started a company in his basement with a friend and the idea that they could tap into Canadians’ farming know-how to give the world “precision agriculture” – a better, more efficient way of maximizing crops and minimizing costs.

Today, Farmers Edge Inc. is a high-tech company closing in on 350 employees, a bastion for engineers, scientists, software developers and business consultants. It delivers research, software, hardware and crop-management programs to farmers all over the world. A couple of years ago, Profit Magazine listed it as one of the country’s top 20 fastest-growing companies.

Now, Farmers Edge is delivering its analysis and crop-management information directly to an app on farmers’ smartphones, allowing them to use real-time data to make informed decisions minute by minute, from the seat of the tractor, on how to tend their fields – whether those fields are in Canada or Brazil or Russia.

“We couldn’t have done this five years ago,” Mr. Barnes says. 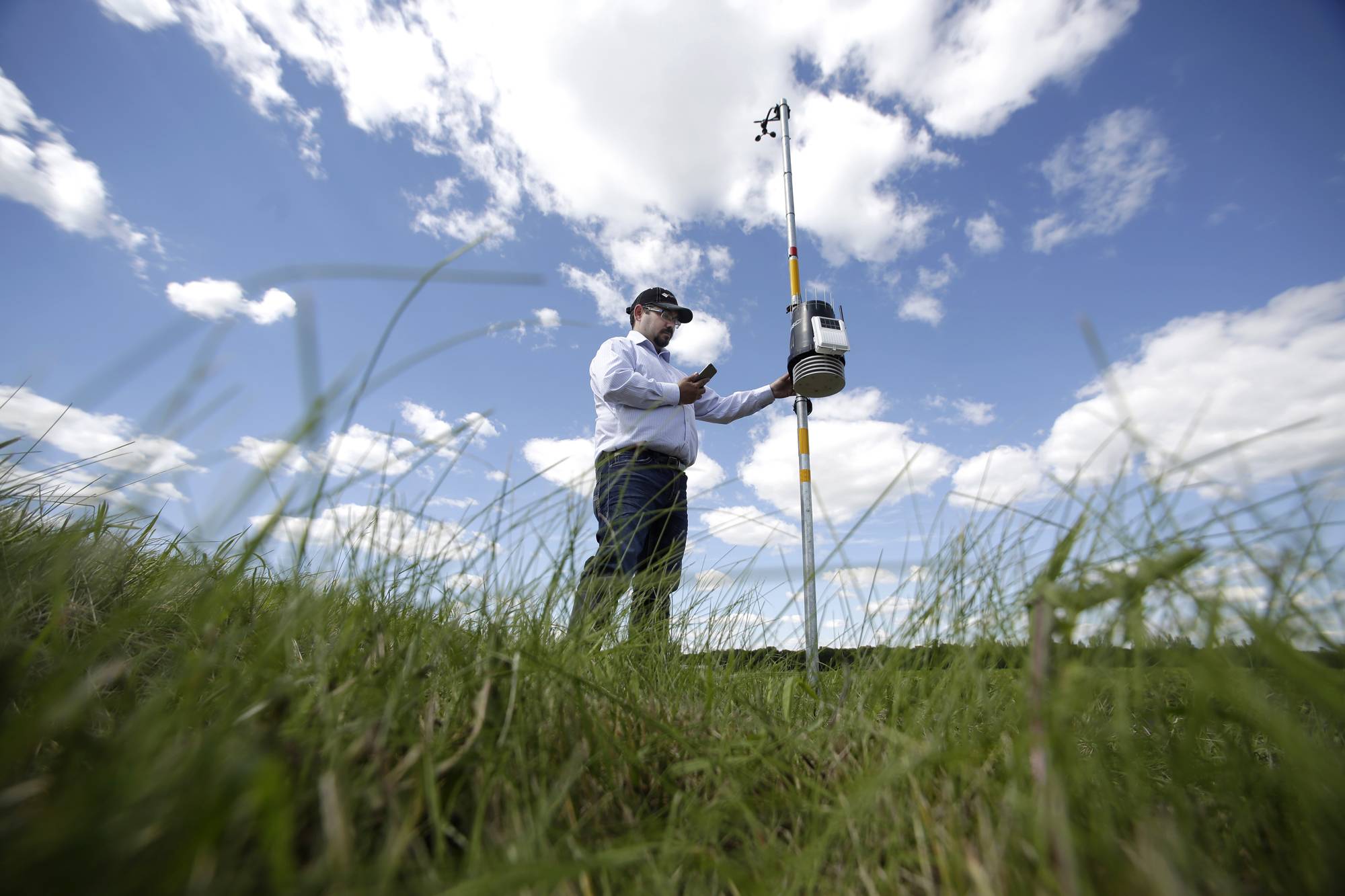 Farmers Edge CEO Wade Barnes monitors the company's app from his smartphone. (Lyle Stafford for The Globe and Mail)

Companies such as Farmers Edge are increasingly emerging as the promising future for a Canadian export sector that is grappling with a severe downturn to its traditional resource base and a perhaps irreversible loss of global market share in manufacturing. The digitization of the global economy has created a world of new opportunities that never previously existed for companies that sell services, rather than physical goods. Experts believe that the services sector, which has already grown to be the dominant element in Canada’s domestic economy as it has matured in recent decades, may be poised to do the same on a more global scale, as technology expands our capacity to export our country’s wealth of knowledge and expertise to customers around the world.

“We think we’re at a takeoff point now,” says Glen Hodgson, chief economist at the Conference Board of Canada, a national economic and public-policy think tank that has published several papers on the fast-growing role of services in Canadian trade. “We can now export these across borders.”

Canada’s economy, and its growth, was increasingly tilting toward services even before the dramatic slowdown in commodities over the past year and a half or the financial crisis a few years before that, as the technological explosion of the digital age has altered the makeup of the country’s economic activity.

In 1999, service-producing industries accounted for 65 per cent of Canada’s gross domestic product. By 2015, their share had risen to 70 per cent.

But the biggest shift has been in the makeup of Canada’s labour market. In the mid-1970s, services jobs made up about 65 per cent of all employment; today, they account for nearly 80 per cent. While the number of goods-producing jobs in this country has barely budged in the past quarter-century, services-sector jobs have increased 50 per cent.

And contrary to widespread public belief, this hasn’t been a case of an economy replacing lost high-paying manufacturing jobs with so-called “McJobs” – low-paying, low-skill fast-food and retail positions. In the past decade, the biggest job-growth areas for services has been in professional, scientific and technical services (up 30 per cent), and health care and social services (up 34 per cent), which together have added nearly one million net new jobs. (Over the same period, accommodation and food services have added about 200,000 jobs, about a 20-per-cent increase; retail jobs have increased by about 80,000, or just 4 per cent.)

“[The McJobs worry] seems to be way overblown,” says Joe Atikian, author of Industrial Shift: The Structure of the New World Economy, a book that explores the global economy’s shift toward services. “If you look at the proportions of professional jobs, higher-paying service jobs, compared to the lower-paying jobs, it puts a lie to the whole general public perception.”

Services still represent a relatively small proportion of Canada’s exports – about 15 per cent – but that’s up from 13 per cent at the turn of the 21st century. On a volume basis, services exports have risen 26 per cent since 2000; goods exports have grown only 11 per cent.

In the past 15 years, exports of such financial services, management services, and architectural and engineering services have roughly tripled. Computer and information service exports have doubled. In the same period, exports of motor vehicles and parts, traditionally a linchpin of the country’s goods exporting sector, have declined 13 per cent.

Calgary’s Benevity Inc. is one company that’s riding that new wave. The firm, which provides software-based solutions to manage corporate and employee charitable-giving programs, had only about a dozen staff when it signed its first big client (Nike Inc.) three years ago. Today, it has more than 260 employees, and has exported its software platform and services to big-name corporate clients spanning the globe.

The Conference Board of Canada argued in a report last year that if you consider the services content that now goes into exported Canadian goods – the value added from services effectively “built into” those products – services are a much bigger part of our exports than the direct numbers suggest. The study estimated that including these “supply-chain contributions,” services account for 44 per cent of Canadian exports, as well as 43 per cent of all products sold through Canadian companies’ foreign affiliates.

“There’s a huge transformation going on inside what were viewed as old and very staid industries,” says Peter Hall, chief economist at Export Development Canada. He says the burst in digital technology going into manufactured goods has ramped up the service component involved in making traditional goods.

“There’s no such thing as a primary industry any more. Every industry is a high-tech industry.”

An announcement from General Motors of Canada in June provided perhaps the highest-profile evidence yet of how this evolution could reshape Canada’s export sector. The auto maker announced it would add up to 750 new jobs at its headquarters in Oshawa, Ont. – and they wouldn’t be workers on the production line, but rather engineers tasked with designing the high-tech, digitally connected vehicles of the future. They’ll be paid roughly 40 per cent more than the average worker on the line. The fruits of their research and development will be exported to GM’s production facilities around the world.

“We selected Canada for this expansion because of its clear capacity for innovation, proven talent and strong ecosystem of great universities, startups and innovative suppliers,” said Mark Reuss, GM’s executive vice-president of global product development, purchasing and supply chain, in the company’s announcement.

“In future, manufacturing and engineering companies will really be data companies with huge amounts of customer behaviour and logistics data. Those that can best leverage the acceleration of global data flows will be in the best position to take full advantage of global markets in the future,” the Conference Board said in a recent report, co-written by Mr. Hodgson and Danielle Goldfarb.

But capitalizing further on service-sector opportunities, experts say, will require a new approach to exports. Canada’s trade deals of the future may have to look quite different from those of the past, such as the North American free-trade agreement, whose great achievement has been in reducing tariffs on physical goods. Trade experts generally agree that the next wave of trade deals must focus on intellectual property – walking a delicate line between protecting ownership and maintaining security on the one hand, and allowing for freer flows of data across borders on the other.

Many experts cite the intellectual-property provisions contained in the Trans-Pacific Partnership, signed earlier this year by Canada and 11 other countries, as an example of the new direction that trade deals will have to take, if trade in services is going to globalize in this century the way trade in goods did in the past century.

“Data flows are now fundamental to every kind of international trade and investment – not just trade in virtual worlds or digital products,” Mr. Hodgson and Ms. Goldfarb wrote in their report. “Policies will need to place much more emphasis on the freer movement of data, people, services and investment.”

“We have to open up our minds to a very different paradigm,” Mr. Hodgson says. “It’s trade in ideas.”