The giant hole in the ground, visible several kilometres away from the vantage point of a jet-propelled plane, looks empty and cold, a desolate no-man’s land.

But as the tiny aircraft closes in, descending on a nearby airstrip, the lunar-like crater can be seen pulsing with life. People scurry below on foot or in trucks and behind forklifts.

The Victor mine, located on a stretch of boggy muskeg in Northern Ontario, is a hive of activity. The open pit yields diamonds, among the best in the world. It also provides jobs.

Hundreds of the jobs have been taken up by Canadians as well as foreigners from as far away as South Africa, one outpost of London-based diamond giant De Beers SA, which has been operating Ontario’s first diamond mine in the James Bay Lowlands since 2008.

The multinational work force at Victor includes members of the country’s indigenous population, among them the Mushkegowuk Cree and the Attawapiskat First Nation on whose traditional territory the Victor mine, and the recently proposed Tango Extension, are located. About one-third of the employees at Victor are from local First Nations communities.

“We have 420 people working here, including around 180 contractors who work 365 days a year, 24/7. It’s a continuous operation and it doesn’t stop,” says Victor general manager James Kirby, a transplant from South Africa. 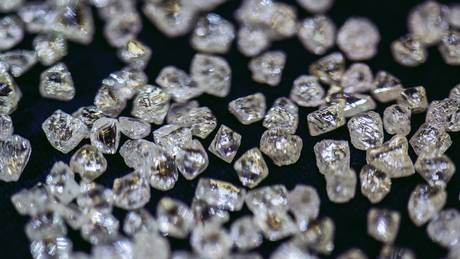 Employees typically work in rotations, two weeks in and two weeks off, and use their 14 days off to fly by charter plane to visit their families. The mine is remote, with no road access for most of the year. Attawapiskat, the closest community, is 90 kilometres away. Caribou trails and scrub fill the emptiness in between.

For many who have found work there, Victor has put the sparkle on an otherwise barren landscape. The mine is the catalyst behind a new power transmission line that has more than doubled the electricity to Attawapiskat, and a new $12-million winter road. But critics of the mine, found upstream on the Attawapiskat River, have tended to see it more as a blight on the local environment.

A study by the Canadian Parks and Wilderness Society’s Wildlands League, released last December, claims that Victor poses a threat to aquatic life by contributing to the creation of methylmercury, a neurotoxin that accumulates in fish and other food sources of the people who live in the area.

De Beers denies the allegations. Over the past 10 years it has had five universities and research groups visit the mine and carry out studies into water, peatland rehabilitation and caribou migration and management. “We sample 300 water bodies a year,” Mr. Ormsby says. 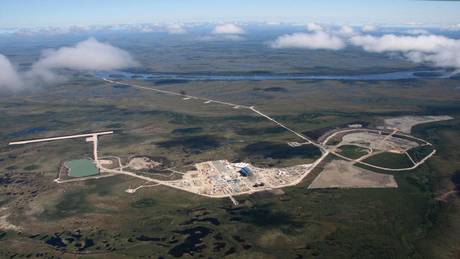 The Victor mine, as photographed in 2008. (De Beers photo)

Diamonds are plentiful in the Canadian North, lying just below ground in igneous rock known as kimberlite. It was created 200 million years ago by a volcanic eruption that left behind white clumps of the precious stones.

Each year, De Beers extracts 600,000 carats in diamonds. The yield is small but lucrative. The average price-per-carat ranks among the highest in the world

“They have an extraordinary clarity,” says Charles Stanley, president of Forevermark, the global diamond brand that De Beers launched in 2008. They are “very attractive to the cutting and polishing industry in Canada and around the world.”

De Beers Canada has extracted more than 5.6 million carats from Victor to date. Another million are anticipated before the mine is depleted in late 2018 or early 2019.

From the stark terrain, the mine’s structures rise like a phoenix, their steel exterior reflecting the pale buttery glow of a northern sun. It’s a massive operation that cost $1-billion in infrastructure and yields tens of millions paid in taxes and royalties to the Ontario government.

The silo-like towers house a processing plant run on the latest in computer technology, including automated sorting. Diamonds are extracted by crushers that reduce large rocks to gravel. No chemicals are used in the mining process. The plant connects to a series of low-lying barns in which a mining fleet of cranes, dump trucks and forklifts, the majority of them driven by women from Attawapiskat, are maintained by teams of mechanics in hard hats and steel toe boots.

The camp’s epicentre is a steel-roofed facility equipped with offices, a gym for basketball and hockey and a cafeteria that functions as a social hub and serves up more than 100,000 meals a year. Communal housing with WiFi dots the perimeter.

A short walk away are structures that aboriginal employees use for traditional ceremonies. There’s also a longhouse for smoking geese and other game hunted off the land. “We do smudgings and cookouts here, and have trap lines just beyond the camp,” says Sherri Lapointe, Victor mine’s superintendent of aboriginal affairs.

De Beers also operates the Snap Lake diamond mine in the Northwest Territories, and it is commissioning another there, the Gahcho Kué project, which the company calls the largest new diamond mine under construction in the world. It is scheduled to enter full production in 2017. 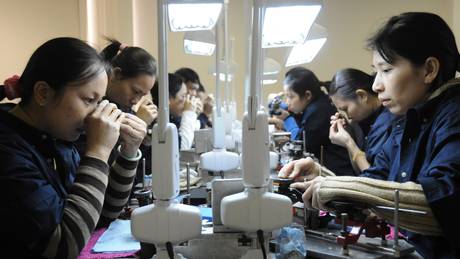 De Beers’ operations in Canada have had secondary economic effects, too. It has launched mine training programs at colleges in Ontario and the NWT and apprenticeships at Crossworks Manufacturing Ltd., North America’s largest diamond cutting and polishing company.

Crossworks opened its Ontario location in a nondescript low-rise building in downtown Sudbury in 2009. A subsidiary of Vancouver-based HRA Group, Crossworks expanded into the province after winning the bid to cut and polish 10 per cent of De Beers’ rough diamond production at Victor.

It employs 45 polishers, 36 of whom relocated from Crossworks’s factory in Vietnam. The immigrants, all of whom have since become Canadian citizens, now help train local polishers for Canada’s expanding diamond trade.

Back at the Victor mine, reclamation work has already begun in preparation for its closure. Thousands of saplings have been planted in areas no longer needed, and once mining is completed, dewatering pumps will be removed from the pit, which is expected to refill naturally with water over a two-year period.

Even though mine production will cease by 2018, Victor will continue to contribute to the economy in the area for about another decade during a lengthy postclosure reclamation process. The project is expected to take place from 2019 through 2025, with environmental monitoring to continue on a regular basis afterward.

De Beers has already started to look for people to fill hundreds of new jobs that will assist in the removal of man-made structures and the replanting of vegetation.

Greenhouses will be built to nurture 60 species of plants native to the area, and teens from nearby Attawapiskat will be brought on site to drive the regeneration program.

“We want to leave it looking better than it did before we arrived,” says Mr. Kirby. “It’s quite a watershed moment.”

3.5 billion years ago: When diamonds were formed 125-200 kilometres below the earth’s surface.

170-180 million years ago: When a volcanic eruption forced magma to the surface on the James Bay Lowlands; it hardened into a type of igneous rock known as kimberlite, which yields diamonds.

2005: When construction began on the Victor mine site.

Forevermark U.S. organized and paid for the writer’s trip. The company had no input on the content of the article.