Tumbling energy prices took a big bite out of Canadian consumer prices in November, reversing the recent surge in inflation and sending the annual inflation rate down to 2 per cent, matching its slowest pace in eight months.

Statistics Canada said the consumer price index slumped 0.4 per cent in November from October, its biggest monthly decline in nearly two years, as gasoline tumbled 7.5 per cent amid a global oil sell-off. Gasoline prices were down 5.9 per cent from a year earlier.

In October, the annual CPI inflation rate was 2.4 per cent, a two-and-a-half-year high.

The November rate matches the Bank of Canada's inflation target of 2 per cent, which is the central bank's principal guide for setting interest-rate policy.

The bank's core inflation measure – which excludes gasoline and other volatile components of CPI, such as gasoline – fell to 2.1 per cent annually, from 2.3 per cent in October. The Bank of Canada focuses on the core rate as its "operational guide" for inflation, as it provides a better view of underlying inflation pressures across the broad economy.

As both total and core CPI rose above the Bank of Canada's target in recent months, economists had begun speculating that the Bank of Canada might be forced into an earlier-than-expected interest rate increase to cool inflation.

But November's inflation numbers, which were lower than most economists had anticipated, give the central bank more breathing room to keep rates lower for longer, the path the bank has indicated it prefers.

"The pullback in both headline and core prices provides some heavy-duty support to the Bank of Canada's view that much of the prior run-up in CPI was 'transitory,'" Douglas Porter, chief economist at Bank of Montreal, said in a note to clients. "In some ways, Canada is facing almost an ideal inflation backdrop – not too hot, not too cold."

In addition to weaker gasoline prices, the cost of clothing and footwear also fell 2.3 per cent in November from October, likely a result of Black Friday discounting. The tumbling fuel prices may have also been a key factor in a 1.7-per-cent slump in the recreation, education and reading materials segment, which was led by a sharp drop in costs for travel.

But food costs, one of the biggest segments of CPI, were up 1.1 per cent month over month, as fruit and vegetable prices moved sharply higher. Shelter prices, another major component, were flat on the month.

Most economists expect Canada's inflation rate to decline further in December and into 2015, as fuel prices have continued to fall, while temporary factors that pushed up inflation earlier in 2014 are dissipating.

David Watt, chief economist at HSBC Bank Canada, calculated that gasoline prices are on track to tumble another 9 per cent in December.

"It suggests that the headline rate of inflation could end 2014 well below 2 per cent," Mr. Watt said. He added that the year-over-year declines will become even more pronounced in the first quarter of next year, because energy prices in early 2014 were elevated by an unusually bitter North American winter.

"We now look for the annual rate of inflation to fall back toward 1 per cent, if not lower, through mid-2015, primarily due to the recent downward pressure on energy prices, and as we do not expect a repeat of last year's deep freeze."

But while gasoline prices have now fallen for five straight months, there is evidence that broader inflationary pressures are building outside of the energy sector. Statscan said the transportation segment (of which fuel is a major part) was the only one of the eight major components of CPI to be lower on a year-over-year basis. Three of CPI's largest components – food, shelter, and household operations, furnishings and equipment – show annual increases of 3.1 per cent, 2.3 per cent and 3 per cent, respectively.

"This latest data confirmed that the broadening out of inflation pressures that started in August continued in November, with 46.4 per cent of the components of the CPI posting gains of at least 2 per cent," Royal Bank of Canada assistant chief economist Dawn Desjardins said in a research note.

"Core goods inflation was still rising in November to levels not seen since early 2012, perhaps due to the impact of a depreciating Canadian dollar," wrote National Bank of Canada senior economist Matthieu Arseneau.

Mr. Arseneau acknowledged that the drop in energy prices will likely keep total CPI down toward the bottom end of the Bank of Canada's target range of 1 to 3 per cent next year. But he expects the weaker currency and an improving labour market will gradually return inflation to the 2-per-cent midpoint target. 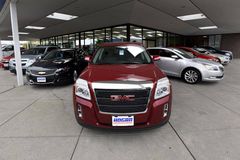 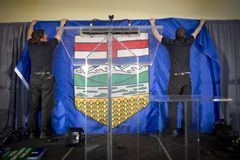 Loonie climbs after Fed signals patience with rate hike
May 12, 2018 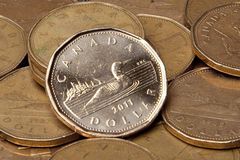