The war against deflation in Japan will start with a battle for the pocketbooks of recession-hardened consumers like Kumiko Kuramochi.

The Liberal Democratic Party, which stormed to an election victory on Sunday, hopes to persuade Ms. Kuramochi and other Japanese that an aggressive monetary policy is going to fire up inflation. The message: buy now before prices start rising again.

The problem though is that a bargain-hunting psychology is so entrenched after two decades of stop-start economic growth, 15 years of falling wages and nearly 15 years of deflation that the government will struggle to convince people their incomes will improve enough for them to buy more expensive goods.

Ms. Kuramochi, 38, is typical. With two small children in tow, she was shopping for bargains in eastern Tokyo ahead of Sunday's election. Worried that her husband's salary as a pipe-layer could get cut next year, she is pulling back on spending.

"I bought winter coats for myself and one of my kids during a sale, because we try to limit how much we spend," Kuramochi said. "I'm worried about the finances. Money is tight and I don't expect my husband's income to get better next year, because the economy isn't doing well."

The problem of how to reverse Japan's long-running deflation has become the defining economic issue for LDP leader Shinzo Abe.

He has vowed to end the era of falling prices and slumping demand in Japan, which is in its fourth recession since 2000, through "unlimited" bond purchases by the Bank of Japan. The argument is this will create inflation expectations, which will translate into consumption and in turn boost economic growth.

Classical economics would argue that consumers should welcome deflation, because it increases their purchasing power, and that people only hunt for bargains in earnest when they worry that prices will rise.

But in Japan's case, data shows purchasing power has been falling faster than prices. Japan's average earnings have fallen 12.2 per cent since fiscal 1997, while a core measure of consumer prices – excluding food and energy – has fallen 6.8 per cent.`

In addition, consumers have spent so many years worrying about incomes and job security that finding ways to spend less has become a habit.

"Our finances will improve next year when my wife goes back to work, but we still plan to buy the cheapest goods we can find," said Yuichi Kawakami, 43, a freelance graphic designer.

"I worry about prices, because the economy isn't doing well. We also need to save for expenses down the road."

Mr. Kawakami, who was playing with his one-year-old daughter in a coffee shop, said he and his wife used the website www.shufoo.net to compare prices at supermarkets in the neighbourhood to find the cheapest goods.

Japanese daytime television regularly celebrates the bargain-hunter: the young housewife who compares prices at three different supermarkets before she buys, the salarymen and office ladies who queue to buy a 300 yen ($3.58) bento box lunch, the retiree who worries the pension system will collapse.

Retailers play their part, constantly discounting to lure customers. In part, that has been made possible because the yen – which has risen close to 50 per cent against the dollar in the last 20 years – has made many imports cheaper.

The result is shoppers are always looking for a bargain and will chase down the cheapest price they can find. Ito-Yokado, where Kuramochi had been shopping, made a big splash with shoppers this month by slashing prices on some goods as much as 40 per cent. It sells fresh food, daily necessities, cosmetics, furniture and clothes.

However, many other economists say Japan needs to make structural changes to its economy by shifting employment to services from manufacturing, encouraging more female employment and getting families to have more children to stop the population from shrinking.

Data from the Bank of Japan underlines the uphill task confronting Mr. Abe.

In September, 62 per cent of people surveyed in the BOJ's quarterly household survey said they expected prices to rise a median 3 per cent over the following year.

Expectations for higher energy and food prices could explain the inflation expectations, but the survey does not ask about specific goods, a BOJ official said. What the survey does show is that households plan to spend less when they expect incomes to stagnate, which has a direct and negative impact on the economy, said the official, who is not authorized to speak to the media so asked not to be identified.

Discretionary spending remains under intense pressure. An annual survey by Shinsei Bank compiled in September showed that the average monthly spending money available to a Japanese "salaryman" was down to its lowest level in 30 years in 2011.

The pressure to discount has created a prisoner's dilemma for Japanese retailers. Restaurant chains and retailers would prefer to sell their goods without discounts, but there is little reason to trust that rivals will not try to cut prices first to poach customers. That logic ignites price wars.

Yoshinoya Holdings Co Ltd, a manager of a popular fast-food chain, cut the price of "gyudon", or stewed beef over rice, at a few new stores it opened. A company spokesman said the price cut to 250 yen a bowl from the usual price of 380 yen was an "experiment".

"Companies realise that cutting prices is a war of attrition and we see signs that companies want to get out of this pattern," said Toshihiro Nagahama, chief economist at Dai-Ichi Life Research Institute.

"Expectations for falling wages have become entrenched. However, if they think wages will rise, then people will react logically and spend more." 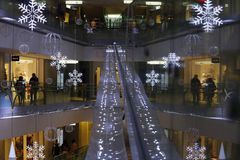