Getting a PhD in Canada is unlikely to provide the return on time and money that many students expect, a new report suggests.

The 136-page study estimates that only 2 per cent of jobs require a doctoral degree. And relatively low starting salaries – many in the $50,000 range – mean it takes decades for PhD graduates to close the earnings gap between them and someone with an MA.

"Most PhDs would say $50,000 is low for where they are, early 30s with years of education," said Jessica Edge, one of the co-authors of the report from the Conference Board of Canada.

The research is likely to add fuel to an already heated debate about whether Canada produces too many PhDs. Only about 20 per cent of students who graduate with the degree end up with full-time teaching jobs in postsecondary education. As a result, schools are increasingly trying to prepare students for careers in business, government or the non-profit sector. The Conference Board study is significant because it looks at whether the private sector can provide that alternative to academic careers.

Over the past decade, the number of PhDs has grown by thousands across the country as governments have pumped money into graduate degrees, hopeful that ever-higher education will lead to productivity and innovation. But employers have not bought that message.

In fact, even the 2-per-cent figure that the study came up with could be too high.

To get that number, the researchers used the Conference Board's help-wanted index, an online tool that collects jobs advertised. A million jobs were posted in Canada in a three-month period in the fall of 2014, out of which 4,000 clearly listed a PhD as a requirement.

The researchers found another 13,000 similar positions they classified as possibly benefiting from a PhD, but that did not explicitly ask for one.

And when those with a doctoral credential are hired, the rewards are initially modest.

Just more than a quarter of the positions that did require a PhD offered salaries lower than $50,000. And more of the jobs advertised in the top category – paying salaries above $100,000 – did not demand five or more years of study after a bachelor's degree.

"Employers with little or no experience of hiring PhDs may view them as too highly specialized," the study says of its findings.

The report appears more hopeful about the long-term returns on the educational investment, and Dr. Edge pointed out that after the first few years, salaries outpace lower levels of education. On average, for example, PhDs earn about $13,000 more than those with an MA.

"There is a challenging initial period," Dr. Edge said. "But long term, PhDs earn more than master's graduates and have lower unemployment rates."

The long term, however, is measured in decades. Lost earnings in the time that a PhD student is in school lead to an almost $300,000 head start by a master's graduate. As a result, the study says, "the earnings of PhD graduates will not surpass master's graduates until the later stages of their career."

Many of the problems identified in the study cannot be solved by providing students with more professional training. PhD salaries in the United States have grown much faster than in Canada; the Conference Board speculates that is because U.S. firms invest more in research and development and need the specialized skills.

Still, in the short-term, governments and universities have to address the knowledge gap, Dr. Edge said.

"We have to give students experiential learning opportunities and promote widely the value of PhDs with all employers." 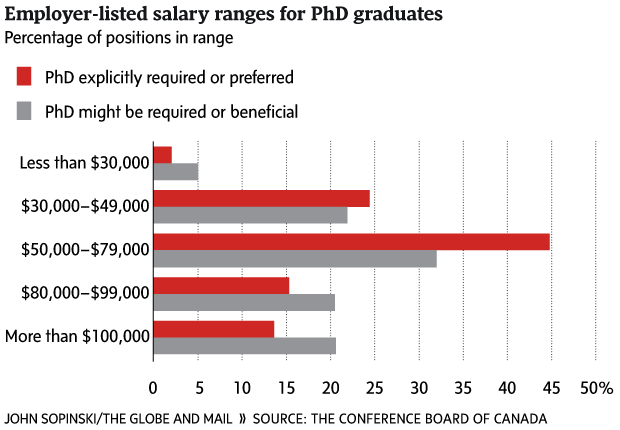 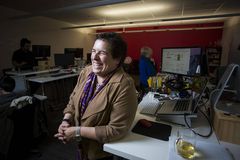 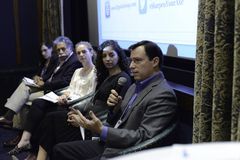 ROB Magazine
How a business degree can help you land a job in technology
October 9, 2015 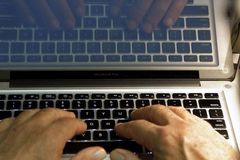