Canada's jobs market is catching up to the reality of a slow-growth economy.

The stage is now set for more-muted hiring due to a cooling housing market, cuts in the public sector and a pullback by consumers.

Across North America, spring is looking to be a little mucky. Jobs numbers in both Canada and the United States confirm still-soft growth. Most economists figure the picture will brighten in the second half of the year, but, for now, fiscal challenges, uneven demand and stumbles in manufacturing are pressuring activity.

In Canada, employers cut 54,500 jobs in March, the most since the recession, as companies shed full-time positions last month. Factories, accommodation and public administration all reduced head count. The jobless rate climbed to 7.2 per cent from 7 per cent to equal the levels of a year ago, according to Statistics Canada Friday.

Jobs numbers can be volatile and one disappointing month does not make a trend. But smoothed averages show a slowdown in hiring, in line with a dampened economy. As a whole, the economy has lost about 26,000 positions so far this year.

"I still don't fully understand why hiring was so strong [in the past half-year]. It had to slow," said David Watt, chief economist at HSBC Bank Canada, who predicts "sluggish, but positive employment numbers this year."

U.S. employers added 88,000 jobs last month, the smallest increase in nine months and less than half of what was expected. The lull, which may be tied to budget cuts and tax increases, triggered concern about a slowdown in the world's largest economy.

In the labour market, the corporate sector led the decline, tallying its second-largest drop since record-keeping began in 1976. The number of private-sector workers tumbled by 85,400, while 38,700 people joined the ranks of the self-employed, and public-sector employment was little changed.

Manufacturing registered a notable drop, shedding 24,200 positions. Factory employment levels are now at their lowest since October, 2011, a reflection of heated global competition and a strong currency.

Every province in the country saw the jobless rate increase last month, save for Ontario, where it was unchanged at 7.7 per cent. The only province that registered job creation in March was Nova Scotia, the agency said.

Cities are seeing considerable differences in the health of their labour markets. Regina has the country's lowest jobless rate, at 3.5 per cent, followed by Saskatoon, at 4 per cent. Peterborough, Ont., has the highest rate, at 10.2 per cent.

"Like most North American jurisdictions, hanging on to manufacturing jobs has been a challenge in Peterborough," said Mike Gannon, employment services program manager at the city's employment resource centre.

The shift he's seeing in the local jobs market is emblematic of changes in much of the country: More opportunities in health care and services to care for the aging population and fewer in manufacturing, along with an increase in precarious, temporary work.

Young people are still having a hard time. The youth jobless rate ticked higher again, rising to 14.2 per cent from 13.6 per cent as more young people looked for work.

Federal Finance Minister Jim Flaherty said that while he's "disappointed" in the jobs numbers, Canada has "recovered more than all of the output and all of the jobs lost during the recession."

Despite job creation since the middle of July of 2009, "too many Canadians remain unemployed," he said.

By its calculations, the main Opposition party says the economy has lost 320,000 jobs under Stephen Harper's tenure. "Conservatives just don't understand that cuts and austerity measures are not the solution," said NDP finance critic Peggy Nash. 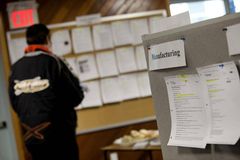 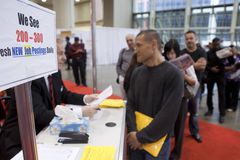