The federal government may need to downgrade its growth projections for the Canadian economy when it releases its mid-year budget update, Finance Minister Jim Flaherty said Thursday.

The Minister told reporters before tabling his budget implementation bill that Canada's economy is holding up reasonably well, but is not immune to gathering headwinds from around the world.

Mr. Flaherty said the mood at last week's meetings of finance ministers in Japan, was "not a positive one."

He noted that the International Monetary Fund has scaled back global growth forecasts for the year to 3.3 per cent, Europe is in recession, the U.S. is seized by political gridlock and even emerging markets are not booming as they once were. China reported its weakest growth rate in three years earlier in the day at 7.4 per cent for the third quarter.

"So far, we're still on track and we expected moderate growth... [but] we're watching close," he said. "We may have to revise downward somewhat, but so far we're in the same ballpark as we anticipated in the federal budget."

A modest revision is unlikely to impact the federal fiscal picture given that Mr. Flaherty made room for negative surprises in the March budget, which called for growth of 2.1 per cent this year and 2.4 in 2013.

That is now slightly below the Bank of Canada's projections, even before what many experts expect to be a downward revision in next week's new monetary review. As well, the economy has missed its growth target in both the first and second quarter with below 2 per cent performances.

The Minister stressed that all governments in Canada need to remain vigilant in their efforts to reduce deficits and accumulated debt.

The latest comments come after a new report by the Macdonald-Laurier Institute warning that some provinces — particularly Ontario and Alberta — are headed to a European-style crisis in the next 10 to 30 years if their policies do not change.

"In the medium to long term, public finances in several provinces are unsustainable, raising the spectre of debt crises, damaged credit ratings, and federal bailouts if corrective steps are not taken," the report warns. "If such crises occur, they will harm not only the provinces directly concerned, but could affect the entire economy."

The alarm about Ontario was expected given that province's $15-billion deficit, but the analysis by San Francisco credit expert Marc Joffe that oil-rich Alberta has the "highest default probability" 30 years into the future was a shocker. Alberta currently has the highest bond rating and no net debt.

Mr. Joffe explained Alberta needs to be watched because it is running large deficits that are projected to persist, will experience more rapid growth in its senior citizens population than any other province, and because most of its eggs are in the oil basket, which is subject to price volatility.

Quebec is in better position longer term, the report argues, because it is less dependent on resource prices and its population is not aging as fast.

Over the 30-year horizon, the report said all provinces have high probabilities of default unless measures are taken.

But he said provinces have plenty of time to act because at present all provincial debt burdens remain well below 25 per cent of annual tax revenues.

Mr. Flaherty said he has no plans to adjust the equalization payments program to take account of the differing aging dynamics of the provinces, but said he is concerned with their finances.

"I spoke to my provincial colleagues in the month of July ... to express my concern about the level of provincial deficits and debt," he said.

"It's very important for Canada that not only the federal government but the provinces are on that same deficit reduction and public debt reduction track."

Mr. Flaherty said he believes provincial finance ministers are committed to bringing down their deficits and debt. 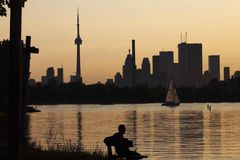 Some Canadian provinces lurching toward ‘unsustainable finances,’ study warns
October 18, 2012
Report an error
Due to technical reasons, we have temporarily removed commenting from our articles. We hope to have this fixed soon. Thank you for your patience. If you are looking to give feedback on our new site, please send it along to feedback@globeandmail.com. If you want to write a letter to the editor, please forward to letters@globeandmail.com.
Comments