It's a great time to be small in Canada.

Ottawa is cutting the small business tax rate again -- to 9 per cent by 2019 from 11 per cent now. The measure will wind up saving businesses an estimated $1.2-billion a year when it's fully implemented.

The move, announced in Tuesday's federal budget, substantially widens the gap between the rate small businesses pay and the 15 per cent rate paid by all other companies.

For Finance Minister Joe Oliver, the rationale is clear. In his budget speech, he said businesses will use these savings to grow, invest and hire more people.

Mr. Oliver may well want them to do all those good things.

But it's not at all clear that tax breaks will do all that.

The awkward reality for Mr. Oliver is that large companies are Canada's engines of growth, not small ones.

The research is compelling. Large companies are more productive, hire more people, pay better wages, provide more stable employment, invest more in research and development, and are more likely to export. In other words, they do all the things governments should want businesses to do.

By widening the gap between the rates for big and small, Mr. Oliver may be unintentionally creating a perverse incentive for companies to stay small, just to get the tax break.

"The whole thing is an extremely inefficient use of tax dollars," insists Don Drummond, a former top finance official and bank economist, who has spent years studying the problem.

To qualify for the small business rate, companies must be Canadian controlled, earn less than $500,000 a year and have capital of less than $15-million. Roughly 700,000 companies claim this lower rate every year.

And last fall it introduced new lower employment insurance premiums for small businesses – all based on the vague promise that these companies would invest, grow and hire.

The problem is that the number of small companies curiously clusters right below the threshold, suggesting that businesses may be staying small just to keep the lower rate. Mr. Drummond said small business owners may be taking money out of their companies, turning down contracts just to stay small or inefficiently splitting into multiple small entities.

Compared with the United States, Canada has an impressive record of creating companies. Where the country falls short is in turning those rising stars into the next BlackBerry or Bombardier.

The size of companies plateaus very quickly in Canada compared with those in the U.S., as businesses falter, fail or stagnate, according to Mr. Drummond. And they quickly destroy many of the jobs they create.

In a major 2013 report on Canada's lagging productivity performance, Deloitte found that compared with other countries, more Canadian startups "slow down or simply disappear in part because many of our business leaders are not investing in activities required to sustain growth."

Deloitte concluded that lavishing policy support on small business is "unbalanced" because these companies are no more likely to grow rapidly and drive productivity than larger ones. "The result is public policy that potentially focuses on one type of business at the expense of others, while inhibiting productivity," according to the report.

Tax policy isn't the only problem. It may not even be the main problem. At the least, it's a diversion from what the government should be doing.

What government policy should target is growth. That's because fast-growing larger companies produce more of all the good things the country needs – exports, R&D, and jobs.

Exporting, too, is a classic example of where scale matters -- particularly when companies are trying to sell in vast distant markets, such as China. Recent research by Dan Ciuriak, a former assistant chief economist at the Department of Foreign Affairs, Trade and Development, found that lowering tariffs through free-trade agreements is rarely enough to offset all the other steep transaction costs involved in trade -- border red tape, currency fluctuations, transportation, language barriers, different product standards and on-the-ground logistics.

That's why the global trade game is dominated by multinationals that can spread the steep costs of foreign transactions over massive volumes.

But a lower tax break could prove to be a costly giveaway to a powerful political constituency, with a scant economic return. 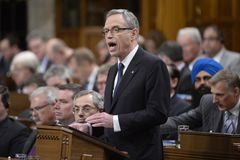