United States Trade Representative Robert Lighthizer says the three NAFTA countries are "finally starting to converge" on the tough issue of automotive content rules, adding that the U.S. and Canada have the "similar objective" of repatriating more auto manufacturing jobs after years of watching them move to Mexico.

Mr. Lighthizer, President Donald Trump's point man on trade, told a congressional committee Wednesday that Washington and Ottawa were becoming increasingly aligned at the bargaining table after months of acrimony.

As revealed Tuesday by The Globe and Mail, the U.S. has dropped its toughest demand: That vehicles made in Canada and Mexico for export to the United States contain at least 50-per-cent U.S. content. Canada and Mexico, for their part, have accepted Washington's demands for tougher "rules of origin" ensuring more North American content in autos.

But other tough U.S. demands remain, including restrictions on Canadian and Mexican companies bidding on U.S. government contracts and the abolition or gutting of most of NAFTA's dispute resolution provisions. Mr. Lighthizer said he also wanted smaller concessions from Canada, such as tightening its "third-world" rules on intellectual property and raising its $20 de minimis cap on the value of goods Canadian consumers can import without paying duty.

Mr. Trump is also facing increasing pressure from his own caucus to drop his proposal to opt out of Chapter 11, a NAFTA provision that allows companies to sue governments in front of special trade tribunals. Even as Mr. Lighthizer testified, 103 Republican members of Congress warned that, without Chapter 11, they would have a hard time approving any renegotiated agreement.

Cracking the auto issue, however, puts a deal within reach.

Sources with knowledge of the talks said the three sides are looking at ways to boost the amount of North American content in autos. The U.S. wants the percentage raised from the current 62.5 to 85.

The ideas in play are similar to compromise proposals Canada made in January, the sources said: Changing the way content percentages are calculated to include more items, such as software development and electronics, and giving companies credits against the content percentage for using North American steel or investing in research and development.

The idea is to ensure that the auto jobs of the future, which will become increasingly high-tech with the rise of electric and self-driving vehicles, are created in North America. Most of the high-tech jobs are expected to be created in the U.S., effectively boosting the American content percentage without implementing a hard-and-fast rule.

Another idea on the table, at the behest of the U.S., is to significantly stiffen the penalties for companies caught using less North American content than the requirement, one source said – fining or even barring them from shipping autos or components into North America.

One source said the objective of the eye-popping U.S. content requirement had been to shock its negotiating partners into taking the talks seriously. By that measure, the play worked. But the U.S. realized it had to drop the demand before any real discussion could happen, the source said.

The three sides are also nearing agreement on a U.S. demand for a sunset clause that would terminate NAFTA after five years unless all three countries agreed to keep it. Canada and Mexico have instead proposed creating an amending formula that would allow for changes to the agreement every five years but without the threat of termination.

"The NAFTA negotiations are rapidly entering the 'close phase' on automotive, a sunset clause and seasonal produce, with Canada and Mexico likely conceding on government procurement," said Daniel Ujczo, an international trade lawyer with Dickinson Wright, which has clients in the manufacturing sector.

Flavio Volpe, president of the Automotive Parts Manufacturers Association of Canada, said there is a determined effort to reach a deal during the next official round of talks, in Washington in early April.

Prime Minister Justin Trudeau confirmed that negotiators were making progress but tried to temper expectations for an immediate resolution.

"There seems to be a certain momentum around the table now that I certainly think is positive, but we will see what new challenges will come up in the coming weeks," he said at the Royal York Hotel in Toronto.

Mr. Lighthizer said earlier this month that he wanted a deal within four to six weeks, before the Mexican presidential election campaign begins in earnest.

And on Wednesday, he signalled that he was willing to put water in his wine to make that happen. He told legislators that his staff had been in Detroit this week for talks with the auto industry to work out details on how an agreement would function. The auto makers have generally been more aligned with the Canadian and Mexican positions in NAFTA talks, favouring freer markets.

He also tried to allay the committee's fears over Mr. Trump's repeated threats to tear up NAFTA. 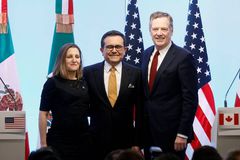 Mexican economy minister says Canada should be set to continue NAFTA without U.S.
March 15, 2018
Follow Adrian Morrow, Greg Keenan and Justin Giovannetti on Twitter @adrianmorrow @gregkeenanglobe @justincgio
Report an error Editorial code of conduct
Due to technical reasons, we have temporarily removed commenting from our articles. We hope to have this fixed soon. Thank you for your patience. If you are looking to give feedback on our new site, please send it along to feedback@globeandmail.com. If you want to write a letter to the editor, please forward to letters@globeandmail.com.
Comments are closed