Bank of Canada Governor Stephen Poloz says Canada's economy has reached a point of near-perfect balance, with most companies running at full capacity and inflation nearing the central bank's elusive 2 per cent target.

"We are at a point in the economic cycle that I think of as the "sweet spot," Mr. Poloz said in remarks prepared for a speech in Toronto Thursday. "We know that a majority of Canadian companies are running flat out."

Mr. Poloz has often talked about to this economic juncture as "home," and for the first time since becoming governor in mid-2013, he says Canada is nearly there.

"We find ourselves quite close to home, and getting closer, with the economy now running close to full output and inflation expected to be around 2 per cent later in 2018," Mr. Poloz said.

Mr. Poloz also issued a warning to people who may be piling into high-flying bitcoin and other so-called cryptocurrencies, insisting they are not currencies at all.

"The term 'cryptocurrency' is a misnomer – 'crypto,' yes, but 'currency, no," he said. "For something to be considered a currency, it must act as a reliable store of value, and you should be able to spend it easily. These instruments possess neither of these characteristics, so they do not constitute "money."

The central bank has said previously that it is exploring the possibility of eventually issuing its own digital currency for retail transactions.

The Bank of Canada has raised its benchmark interest rate twice so far this year – to 1 per cent. At that level, Mr. Poloz said rates remain "quite stimulative."

And he vigorously defended the bank's decision not to be moving sooner to get its rate back to neutral, particularly with the economy at or near full capacity. The bank considers 3 per cent to be the point where its key rate is neither speeding up nor slowing economic activity.

"We still see signs of ongoing, albeit diminishing, slack in the labour market," he said. "Fundamentally, this is an exercise in risk management."

Mr. Poloz said the bank would continue to be "cautious" and "data dependent" as it ponders its next rate decisions – the next of which comes Jan. 17.

At a news conference following the speech, the governor said that the use of the word "cautious" in recent Bank of Canada interest-rate announcements "is not a code" indicating that the bank wouldn't raise rates again in the foreseeable future, after two quarter-percentage-point rate hikes in the summer. Financial markets have largely been interpreting the use of the word as saying just that – and assuming that as long as the bank is saying "cautious" in the rate announcements, it isn't pondering another rate hike.

"My interpretation of the word 'cautious' is like it is in the English language: You're careful, you watch for signs you're making a mistake," he said.

"The metaphor is driving in a snowstorm. If you're going to go home from work and there's a snowstorm that afternoon, you may drive more cautiously," he said. "But that doesn't, I think, translate into sitting in your car in the parking garage until the next day."

CIBC economist Nick Exarhos said in a research note that the upbeat comments in Mr. Poloz's speech "should keep the door open to [a] first-quarter rate hike."

But Mr. Exarhos said it would likely take "blowout" economic growth numbers in October for the bank to move in January.

The U.S. Federal Reserve raised its benchmark rate to 1.5 per cent on Wednesday, further widening the gap between Canadian and U.S. rates.

One of Mr. Poloz's predecessors at the Bank of Canada, David Dodge, has criticized the central bank for overstimulating Canada's economy in the face of rising financial vulnerabilities, including record household debt.

"While I understand why they want to be cautious, and I think that's quite correct, the fact that they are not moving to deal with what is a problem in financial markets arising from this very long period of very low interest rates is I think a mistake," Mr. Dodge told Bloomberg News recently – an extremely rare public dig by a former governor.

And he pointed out that 40 per cent of HELOC borrowers are not regularly paying down their principal, delaying debt repayment.

"Furthermore, some may be using their HELOC to speculate – for example, to fund a down payment on a second house with the intention of flipping it," he said.

The warning comes as regulators prepare in January to impose new stress tests that will make it harder for borrowers to qualify for new uninsured mortgages. The bank estimates that roughly 36,000 loans $15-billion worth of borrowing in gthe past year would not have qualified under the new restrictions.

Mr. Poloz also expressed concern about the falling participation of people aged 15 to 24 in the labour force. The rate has fallen five percentage-points to roughly 63 per cent in the past decade and now stands at the lowest level in 20 years.

"If we could return the youth participation rate to its level before the global financial crisis, more than 100,000 additional young Canadians would have jobs," he said.​

New mortgage rules could disqualify 10% of buyers with big down payments: Bank of Canada
November 28, 2017 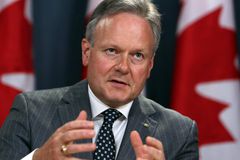 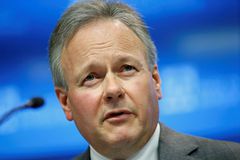