The head of the Bank of Canada went to the country's industrial heartland to argue the historical case for open borders for trade, investment and immigration, wading into the protectionism debate that has taken hold in the United States, Canada's most important trading partner.

In a speech Tuesday at Durham College in his hometown of Oshawa, Ont., Stephen Poloz traced Canadian history back to the War of 1812 to illustrate how these three key pillars of economic internationalism have fuelled Canada's prosperity – and how periods of global protectionism have hurt growth both here and among our trading partners.

"I find the correlation between economic progress and openness to be striking," Mr. Poloz said. "When trade barriers are falling, when people are coming to our shores and when investment is rising, Canadians prosper.

"The flip side is that responding to tough economic times by turning inward rarely succeeds.

"What experience has shown is that the fears of openness are misplaced," he said. "Protectionism does not promote growth and its costs are steep."

Tuesday's speech was Mr. Poloz's strongest defence yet of the principles of economic openness, an issue that has rapidly come to the global forefront with the election of protectionist U.S. President Donald Trump, as well as rising nationalist political sentiment in many European countries. Mr. Trump wants to renegotiate the North American free-trade agreement, the cornerstone for the flow of goods, services and investments across the Canada-U.S.-Mexico borders.

"The timing of this discussion is not accidental; it's not specific to developments in the U.S. It's actually specific to a global retrenchment in thinking that openness is somehow not working for everyone," Mr. Poloz said in the audience question-and-answer session following his speech.

Mr. Poloz did say, however, that the more than two-decade-old NAFTA trade deal has room for improvement and updating.

"There may be things that could be done to improve NAFTA. I welcome a dust-off of NAFTA. That's what should happen with those kinds of agreements."

In a news conference following his speech, Mr. Poloz said its near impossible at this stage for the Bank of Canada to peg any sort of concrete estimate on how significant the threat of a NAFTA renegotiation poses to the Canadian economy.

Until we know more details of Mr. Trump's intentions, he said, that uncertainty itself poses a more immediate risk to Canada's growth prospects – notably the impact on the climate for business investment, which is already in a prolonged funk amid the aftermath of the oil price shock and nagging weakness in business confidence.

"We're watching for investment recovery, but it's going to depend from company to company whether they have the confidence to do that expansion when NAFTA may change."

Mr. Poloz declined to respond directly to questions about possible moves by the Ontario government to cool the red-hot Greater Toronto Area housing market, a day after Ontario Finance Minister Charles Sousa said the government plans to include measures in its upcoming spring budget to address soaring prices and eroding affordability. The Bank of Canada has consistently identified excessive housing markets, chiefly in Toronto and Vancouver, and the associated high household debt levels, as key risks to the country's economic and financial stability.

But Mr. Poloz reiterated the central bank's opinion that the price gains in Toronto look to have outrun the underlying strength in Toronto's economy that has driven healthy demand in the housing market.

"Even though the fundamentals are strong, it's hard to reconcile the rates of growth that we've seen with identifiable fundamentals, which does suggest there is a degree of expectational dynamics involved," he said – suggesting that there is a speculative component to Toronto's rising prices.

"If people are buying homes purely on the expectations that prices are going to rise further, then that's not fundamental demand," he said. "It's the sort of riskier type of transaction in a market that can go down as well as up." 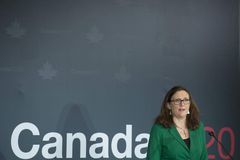