It was as close as Ben Bernanke will come to bravado.

"Monetary policy appears to have succeeded in offsetting a good deal of that fiscal drag, which we were not at all sure we could accomplish, so we certainly are not giving up," the Federal Reserve chairman said Wednesday at a press conference, probably his last before he retires at the end of his second four-year term next month.

A hero to some, a villain to others, Mr. Bernanke willingness to push the bounds of monetary policy in the face of grave economic danger mark his tenure as the Fed's leader as one of the most remarkable in the central bank's 100-year history.

The period will be defined by two words: "quantitative easing," Wall Street's term for the Fed's policy of creating tens of billions of dollars a month to buy financial assets.

Purists recoil at the sight of unelected technocrats flooding the economy with cash, a recipe, they say, for runaway inflation. Mr. Bernanke's Fed embraced the policy like no central bank before it. With the benchmark lending rate at zero, the Fed resorted to QE on three separate occasions as the U.S. recovery showed signs of deflating, most recently in September 2012. By the time it is finished with its latest program, the Fed will have created some $4-trillion (U.S.) to purchase Treasury debt and mortgage-backed securities.

Yet for all that money, the U.S. economy rarely rose above lacklustre. Even Wednesday, when the Fed decided to take the first step down the long road to the winding up of QE, policy makers acknowledged that growth is only "moderate." The economy's failure to launch has become Exhibit A in the case against the success of QE, and by extension Mr. Bernanke's tenure as chairman. A proper economic recovery puts up annual growth rates in excess of 3 per cent; the U.S. has struggled to manage 2 per cent.

On his way out, Mr. Bernanke is leaving his critics with something to consider. Extraordinary monetary policy isn't the only unusual thing about the recovery from the financial crisis. Almost as remarkable has been the absence of a consistent contribution to gross domestic product from government. Past recoveries were pushed along by government spending and hiring. For much of the post-crisis period, the Fed has been working alone.

The Congressional Budget Office estimates that government will subtract 1.5 percentage points from GDP growth this year. The U.S. economy is on track to expand by about 2 per cent in 2013. Add those numbers together, and you get the rate of growth needed to seriously reduce the unemployment rate.

"People don't appreciate how tight fiscal policy has been," Mr. Bernanke said Wednesday. To make the point, he compared the current recovery to the rebound from the last recession. At this point in the previous recovery, local, state and federal governments had added 400,000 workers. This time, the figure is negative 600,000.

Those calculations must be part of any assessment of the efficacy of QE. Mr. Bernanke himself would agree that "printing money" is a less than ideal policy. But the case against it is not as strong as the critics suggest.

"We do think of asset purchases as a secondary tool behind interest-rate policy," Mr. Bernanke said, acknowledging that a central bank can't go on creating money to buy bonds indefinitely. "I would say at this point, though, the asset-purchases program, the last one, is well on it wasy to meeting our economic objective. I am very pleased that we are able to over time wind down this program, slowing the pace of purchases, because we reached our objective rather than because the cost or efficacy issues became important." 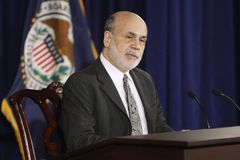 The economy: Tidings of joy from Congress, Bernanke
December 18, 2013