As recently as this past summer, one economic fear dominated discussion: the danger of deflation.

Now that fear has been supplanted by worries over deflation's opposite number - inflation - as the prices of commodities ranging from oil to cotton spike upward.

But is the threat of deflation really over?

Market watchers who've been predicting that consumer prices will eventually start falling remain convinced that recent inflation jitters are an economic version of a head fake, and before long, the deflationary conditions they've been expecting will emerge.

It's a contrarian view, to be sure. The Federal Reserve, which has pumped hundreds of billions of dollars into the system, appears to be tilting toward a view that inflation is a growing risk. Over the weekend, James Bullard, president of the St. Louis Fed, suggested that the central bank should consider ending its second round of quantitative easing before June, when the stimulus measure is due to wind down.

But those who continue to warn about deflation point to a host of factors that the Fed and others are playing down. Record levels of debt are one factor that could drag prices into a downward spiral. Technological innovation, which is increasing the supply of many goods and reducing prices, is another deflationary influence. So too is the fading power of labour to drive wages higher.

"We do feel that deflation is probably the biggest threat to the economic environment," comments Charlie Minter, director at Comstock Partners, a Pennsylvania-based money manager, and a long time proponent of deflation.

For everyone from homeowners to investors, picking a winner in the deflation-versus-inflation argument will be a key decision over the next few years. Each economic condition favours radically different strategies.

If deflation does break out, forget about making big capital gains on a home. Think about losses, because prices will sink. Many heavily indebted businesses will also suffer. Meanwhile, stocks and commodities will tank, likely by scary amounts, while the prices of government bonds soar. The best approach would be to sell shares or even short them - ditto for commodities - while backing up the truck to buy a massive bond portfolio of ultra-safe government bonds.

If inflation takes off, the reverse holds true. Producers of commodities and resources, as well as investors in those areas, will be positioned to coin money. Home prices will appreciate, while bond holders get walloped.

No one really knows at this point which outcome will prevail. The big question is whether the deflationists have been wrong in their call, or whether their projection is just early.

One argument in favour of the deflation-is-likely case is a look at the track records of prognosticators who've been making the claim for it. They include such luminaries as David Rosenberg of Toronto money manager Gluskin Sheff + Associates, and Gary Shilling, head of A. Gary Shilling & Co., a New Jersey-based money manager and economic consulting firm. Both argued for years that a dangerous bubble was building up in the U.S housing market before they were vindicated by events.

In addition, some institutions with a strong record of calling the economy's turns, such as Toronto insurer Fairfax Financial Holdings, have begun to take out hedges, or contracts, that will protect their firms should consumer prices start to fall.

Those predicting deflation say that an outbreak of declining consumer prices is being temporarily held in check by the outsized efforts governments have mounted - through huge deficits and loose monetary policy - to stabilize the global economy following the 2008-09 stock market panic.

Chief among these recovery efforts is the U.S. Federal Reserve's program of quantitative easing, which consists of buying U.S. government bonds with newly minted cash. The deflationists believe this action has given a temporary upward boost to inflation, commodities, and stocks.

"We have always viewed the path to deflation as occurring in fits and starts. There would be episodes of cyclical recoveries in inflation," says Lacy Hunt, economist at Hoisington Investment Management Co. in Austin, Tex., a money manager in the deflation camp.

"The quantitative easing is scheduled to end at the of June and we'll get a truer read on inflation once that program ends," Mr. Hunt predicts.

Mr. Minter says the experience of Japan demonstrates that deflation develops slowly. It took about 10 years after the country's stock and real estate markets crashed in 1990 for falling consumer prices to become entrenched in the domestic economy.

Most of those who see deflation developing over the next few years base their view on the idea that Western economies are too just encumbered by debt to produce robust, inflation-promoting economic growth. The U.S., for instance, has accumulated total debts among businesses, individuals and governments that are about 3.5 times larger than the entire size of the U.S. economy, a record high.

Excessive debt exerts a deflationary force on the economy because larger and larger amounts of money have to be diverted to pay off interest and principal, undermining consumption. This depresses growth, and can drive consumer prices into the negative range, just as it has in Japan, the first advanced Western country to experience deflation in modern times.

To be sure, there are other potential contributors to deflation. Technological innovation is one key factor, demonstrated in plunging prices for computers, televisions and other electronic gadgets. Even Internet shopping has a deflationary impact as it enables consumers to easily shop for the lowest possible price.

Despite the recent surge in commodity prices, there are plenty of trip wires that could cause the global economy to stumble into deflation.

Mr. Shilling says one big worry is U.S. housing prices, which he believes could fall another 20 per cent because of the huge inventory of more than two million unsold homes. Such a large house price decline would erase the equity of many homeowners and drive down personal consumption, the value of mortgage-backed securities, and the prospects of many lending institutions.

Other potential triggers are Europe's sovereign debt crisis spinning out of control, and a hard landing for China's high flying economy, which would prick the commodity price bubble.

Given his views, Mr. Shilling says stocks look pricey. "They're awfully expensive," he says. "I just can't see what is going to provide the kind of growth that is assumed with current stock prices." 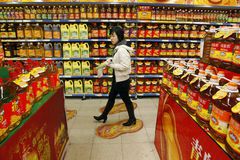 Carnage not over in U.S. housing industry
February 23, 2011
Deflation demands new strategy for investors
July 16, 2010
Follow us on Twitter @economy_lab Opens in a new window
Report an error Editorial code of conduct