As Jim Baker, former U.S. treasury secretary to President Ronald Reagan, observed at an event last week celebrating the 25th anniversary of the 1988 free-trade election, free trade is a hard sell politically because it creates winners and losers. Even if the winners outnumber the losers, the losers are more vocal.

Such ambivalence is almost universal with regard to free trade. Despite free trade invariably creating more winners than losers, the winners are almost always in the future (as they win new markets not previously available). Losers, by contrast, tend to feel the pain immediately. Canada is no exception, as two news stories this week illustrate.

First was Trade Minister Ed Fast's announcement of Ottawa's trade agenda for the next five years. Given the difficult politics of trade, the government's continued commitment to the file is both extensive and laudable.

Trade has to be a centrepiece of any government's economic policy that has genuine growth as its objective. If the recently announced agreement in principle with the European Union on free trade results in a signed deal, Canada will be the only major industrialized country to have preferential access to the world's two largest markets – the EU and the United States. For a golden moment that gives us unique trade access to more than half of the world's economy.

But others are hard on our heels. The U.S. and the EU are aiming to conclude their own trade deal. We have to keep pushing forward, especially where new trade deals allow us to diversify our exports away from the U.S., on whom we are still dangerously dependent. Privileged access to the EU and U.S. is absolutely vital, but while these markets are huge, they are also slow-growing. Selling into fast-growing markets like Asia is therefore imperative.

Among Western economies, Canada is unusually dependent on international trade; our standard of living has traditionally benefited from improving terms of trade (the value of our exports rising faster than the value of our imports). But extending that winning streak is hard, which is why Canada will be an enthusiastic and energetic participant in the Trans-Pacific Partnership talks to open Pacific Rim markets.

Another story underlined the remaining power of potential losers under free trade to cause political difficulties. It comes from Quebec, and focuses on the federal government's continuing efforts to create a single national securities regulator.

While Quebec led the charge for free trade with both the EU and U.S., free-trade ardour cools when dealing with other Canadians. After all, the national securities regulator is about creating a single set of rules and standards for the securities market, tearing down barriers erected at provincial borders.

The Quebec government, the Montreal Board of Trade and various Quebec companies oppose the federal initiative in securities, claiming that it would destroy a "unique" network of service providers in the Quebec market, and thousands of jobs would shift from Montreal to Toronto.

This is textbook protectionist bombast: No one knows our local market like we do, and barriers should protect our superior service from clearly inferior outside competitors. No satisfactory explanation is ever offered as to why consumers would abandon this "superior" network for inferior providers if the barriers were dismantled. Either the current setup is genuinely superior and will survive, or else consumers will prefer the new arrangements, in which case the old dispensation isn't superior at all, but is old fashioned rent-seeking dressed up in the threadbare cloak of nationalism.

Ditto for the argument about vast employment marching down the TransCanada to Toronto. Montreal was Canada's financial capital until the early 1960s, but has been overtaken by Toronto despite protectionist barriers. Perhaps the Quebec financial sector and provincial government should spend more time asking how they got things so badly wrong over decades, instead of looking to insulate what's left from some salutary competition. 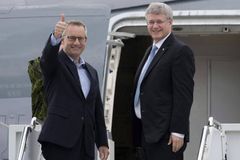