Paul Volcker, the former chairman of the U.S. Federal Reserve, questioned Monday whether the political will exists to resolve the economic tensions that threaten the global economic recovery.

Speaking after finance ministers failed to bridge significant differences over currency policy on the weekend, Mr. Volcker said it will require "extraordinary feats of leadership" to bring about agreement in today's global economy.

The recovery is strained because growth in advanced economies is weak, while growth in emerging markets is strong. International capital is chasing growth, creating upward pressure on emerging-market currencies, which governments in many countries are trying to temper through policy intervention. This is creating tension in advanced economies, which need to increase their exports to make up for weak demand at home.

Mr. Volcker said this situation only can be resolved by international agreement. The international monetary system that came out of the Second World War was relatively easy to establish because the United States was the dominant force on the world stage. Dozens of countries were involved in the talks, but the U.S. ultimately dictated the rules, with a little pushback from Britain, Mr. Volcker said.

This time it is different. The U.S. remains the dominant economy, but it is no longer predominant. Growth in countries such as China, India and Brazil is the only thing keeping the global economy out of recession. So even as finance ministers from the Group of 20 major economic powers say they recognize the need to co-operate, they stop well short of enshrining that co-operation in a formal agreement.

"It's very hard now," Mr. Volcker said during a panel discussion sponsored by the University of Virginia's Miller Center of Public Affairs in Washington. "You have to have extraordinary feats of leadership to get the results we need."

It was unnecessary for Mr. Volcker to say that no one is attempting any such feats at the moment.

Facing what Brazilian Finance Minister Guido Mantaga called a "currency war," officials from the world's leading economies failed to come up with a plan to ease tensions during the weekend meetings of the International Monetary Fund and World Bank. China remained obstinate, saying a fast revaluation of the yuan would result in mass factory closures and social instability. At the same time, U.S. officials said nothing to indicate they were listening to criticism that loose monetary policy is having an equally destabilizing effect on foreign-exchange markets by weakening the dollar.

Mr. Volcker's concerns about leadership add another dimension to a debate that tends to become a technocratic discussion about the policies that could be used to quiet foreign-exchange markets, reduce the U.S. trade deficit and get ultra-competitive exporters such as China and Germany to generate more domestic demand. One of the reasons this debate goes nowhere is because so few leaders have shown a willingness to put the international economy on par with their own domestic political interests.

"We don't have leadership," Ousmène Mandeng, the London-based head of public sector investment advisory at Ashmore Investment Management and a former IMF official, said in an interview over the weekend in Washington.

Mr. Volcker's comments came during a talk on central banking that included the heads of the European Central Bank, the Bank of Japan, the People's Bank of China and the Bank of England.

Jean-Claude Trichet of the ECB said a way must be found to make politicians, if not voters, understand that "optimizing" at the national level is no longer enough to guarantee economic stability.

Mr. Trichet's British counterpart, Mervyn King, said finance ministers deserve some credit for empowering the IMF to do deeper analysis of how the domestic policies of major economies affect their trading partners. But much more needs to be done - and it will take politicians to do it.

"It's not enough any more to pretend that pursuing sensible domestic frameworks will generate stability," Mr. King said. Yet the U.S., China and others tend to follow policies geared exclusively to their domestic circumstances, and reorienting to a more global approach will be "inherently political." 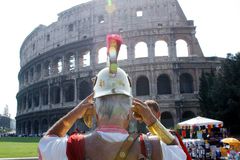 IMF takes on peacekeeping role in global 'currency war'
May 1, 2018 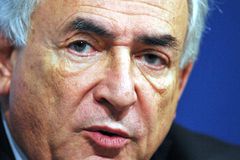 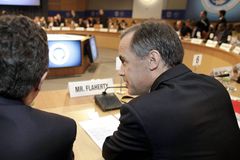