Shares of the parent of grocer Sobeys Inc. slid on Thursday as investors digested its dramatic quarterly profit plunge to what one analyst described as an "unprecedented level."

In intraday trading, Empire's Class A shares dipped 17.1 per cent or $3.19 to $15.51 on the Toronto Stock Exchange – their lowest level in more than six years.

François Vimard, interim chief executive officer of parent Empire Co. Ltd., acknowledged that the results missed its own internal targets. "Our results are weaker than our expectations," he told an analyst conference call Thursday after the company released the previous night what he called "very disappointing" second-quarter results. Profit was sliced in more than half to $33.1-million while adjusted profit tumbled almost 80 per cent, to $32.9-million.

Mr. Vimard said Sobeys has hired Boston Consulting Group to assess the problems and advise on how the country's second largest grocer can streamline its operations further, cut costs and trim prices to woo back customers.

The problems stem from Empire's $5.8-billion takeover of Safeway Canada in Western Canada in late 2013, resulting in a botched integration of the two chains, including faltering private label and purchasing changes and overly high prices in a market where low-cost rivals were gaining ground.

Analysts responded swiftly to Sobeys' deteriorating results, which they said were meaningfully below the Street's expectations.

"It is getting worse," warned Michael Van Aelst, retail analyst at TD Securities.

"Over all, not only did [the quarterly results] not show any signs of stabilization at Safeway, but total earnings fell to an unprecedented level," said Peter Sklar, retail analyst at BMO Nesbitt Burns.

In mid-morning trading, Empire's Class A shares dipped 13.8 per cent or $2.58 to $16.12 on the Toronto Stock Exchange – their lowest level in more than six years.

Mr. Vimard said the problems have been compounded by heated competition in Western Canada as well as Air Miles angering its customers across Canada by saying it would cut off the time in which they could collect rewards – and then reversing its decision at the last moment.

"Our customer wasn't happy [with] the way the partner managed that relationship with them," Mr. Vimard said. "It did affect us directly." But perhaps even more pressing is the rise of discounters in Western Canada, with low-cost giant Wal-Mart Canada Corp. and others expanding in that region. Sobeys' difficulties were compounded by the tough economy in Western Canada as oil prices fell.

"The market is overall heating up," Mr. Vimard said.

He said Sobeys, which is at a disadvantage to its key rivals by not operating its own grocery discounter in Western Canada, is now "seriously" considering launching a low-cost supermarket in that region. "Clearly it's something we're taking seriously." Sobeys runs discounter FreshCo in Ontario but has not expanded it beyond that province.

Some analysts questioned Sobeys' decision to hire a consultant to study its shortcomings. "At the end of the day, everybody has known for a long time that taking complexity out and taking costs out of the business was an imperative," Patricia Baker, retail analyst at Scotiabank, said on the conference call.

She said with Sobeys pouring money into Boston Consulting, it expects "a good payback" even though the experience of other grocers that have spent on consultants has been: "that bill can mount."

Loblaw Cos. Ltd., the country's largest grocer, was notorious over the past decade for spending big sums of money on consultants in its own prolonged transformation initiatives.

Mr. Vimard justified the consultancy expense, without predicting how much it will come to, by saying it will generate a "return on capital" and provide a "mirror" to understand its troubles. The company expects the consultant's study to take a few months, with the goal of considering its recommendations by its fiscal fourth quarter, which ends in the spring.

Adjusted profit tumbled even more – by more than 70 per cent – to $32.9-million or 12 cents a share from $110.7-million or 40 cents. Analysts were expecting 28 cents a share in the latest quarter, according to a poll by Thomson Reuters.

"Clearly a very disappointing second quarter for fiscal 2017 reflecting the significant and ongoing challenges we have been experiencing in our business," Mr. Vimard said in a statement on Wednesday. "These challenges simply reinforce the need for a renewed focus on our business transformation efforts, as well as a significant expansion and acceleration of efforts to reduce costs and complexity throughout our organization."

Sobeys has been racing to fix its problems and lower prices. By July, it parted ways with its CEO, Marc Poulin. But the changes have yet to show up in improved financial results.

Last year under its former CEO, Sobeys launched an initiative to simplify its buying and selling, asking suppliers to give it breaks in its attempt to become a leaner operation and provide more deals for shoppers. It dropped some controversial supplier pricing practices aimed at streamlining the multiple payment deduction process for such things as bulk buying and flyer promotions.

Mr. Vimard suggested on Thursday that the grocer has seen some resistance from suppliers. "You don't make that level of change in an industry without having people that are challenging those changes."

And it will take time for customers to understand the better pricing on the store shelf, he said.

But he said the company will have to continue investing in lowering prices, which is bruising gross profit margins.

Sobeys' sales at stores open a year or more dropped 2.6 per cent, excluding the negative effects of fuel prices. They would have declined 1.2 per cent if that and the impact of the ailing western business were excluded. Those sales are considered a key retail measure.

Empire's board of directors declared a quarterly dividend of $0.1025 a share on both the non-voting Class A shares and the Class B common shares that will be payable on Jan. 31 to shareholders of record on Jan. 13. 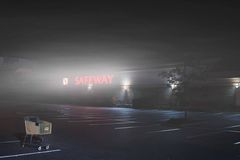