Grocer Sobeys Inc. will finally launch its FreshCo discount chain in Western Canada next year as it races to catch up to rivals that have expanded in a fast-growing segment of food retail.

Empire Co. Ltd., the parent of Sobeys, will start in 2018 to convert almost 65 of its 255 Safeway and Sobeys stores in Western Canada to FreshCo, with the bulk of the changes coming in the following four years.

Sobeys already runs 91 FreshCo stores in Ontario and has been considering for years moving beyond that province with the low-cost format. But it has been bogged down by operational missteps and weak financial results since its botched $5.8-billion takeover of Safeway in Western Canada in late 2013. Now, it faces further uncertainties and expenses as it races to turn around its business.

"The absence of a large discount banner put us at a structural disadvantage," Michael Medline, who took over as chief executive officer of Sobeys and Empire almost a year ago, told an analyst conference call on Wednesday. "Discount grocery is the fastest growing segment of the bricks-and-mortar market … We need to participate to a greater degree in this higher-growth segment."

As Sobeys prepares to introduce more discount stores, it grapples with a customer perception of overly high prices, added costs of rising minimum wages and a massive transformation, dubbed Project Sunrise, which threatens to cause operational disruptions in the coming months.

While company executives said they were satisfied with the transformation efforts so far, they warned that Sobeys was heading into its riskiest period as it lays off 800 office staff and slims down its operations, potentially pinching profit margins or sales in the next two quarters.

The Stellarton, N.S.-based retailer raised its estimate to $240-million from $200-million of one-time cash costs it would incur tied to severance, relocation, consulting and "minor system developments."

As well, it warned it may not be able to fully offset the effects of minimum-wage increases in Ontario and Alberta by as much as it had earlier predicted: It had estimated the increases would cost up to $25-million in 2018 and $70-million the following year. Now, the company is pointing to the possibility of an additional squeeze of up to $20 million in 2019.

Investors reacted by pushing down Empire's shares almost 6 per cent to $24.59 on the Toronto Stock Exchange.

Despite the uncertainties, Sobeys needs to catch up in discount groceries. Discount-food selling makes up 40.5 per cent of the estimated $100-billion-plus food-retail market in Canada, up one percentage point in the 52 weeks ended Sept. 30, according to researcher Nielsen. That compared with no growth in the traditional food retail segment over that same period, the data show.

At Sobeys, the discount format represents only about 13 per cent of its overall sales, Mr. Medline's research suggests. Its discount chain, FreshCo, is just the sixth ranking discount banner in the country, he said.

No Frills and Real Canadian Superstore, the discount chains owned by market leader Loblaw Cos. Ltd., are among the top low-cost grocery players, while discounters Wal-Mart Canada Corp. and Costco Canada have been rapidly ramping up their grocery offerings.

Mr. Medline said while discount grocery is picking up quickly, that segment isn't as intense in Western Canada as it is in Central Canada. "There is a lot of white space," he said.

He said Sobeys will convert its unprofitable stores – mainly Safeway outlets but some Sobeys as well – to FreshCo in the next five years. But it will close a "limited" number of underperforming stores in Western Canada rather than turning them into FreshCo stores, he added.

Sobeys will learn from its FreshCo stores in Ontario, including tweaking the offerings in some of the supermarkets to reflect the tastes of people in their surrounding ethnic communities, he said.

FreshCo, which was rolled out in Ontario about seven years ago, is performing well but "not as strong as we would like," Mr. Medline said. The discount chain already is experimenting with new tactics and looking at how better to tout its low pricing, he said.

Michael Van Aelst, retail analyst at TD Securities, said Sobeys has stemmed its substantial market-share losses of the past four years as sales volumes stabilize. But achieving meaningful sales growth could be tough because of the retailer's existing traditional-store focus and strong competitors.

"The FreshCo rollout should eventually help, but could also cause some disruption during the five-year transition," Mr. Van Aelst said in a note.

Sobeys's second-quarter same-store sales, a key retail measure, rose 0.6 per cent compared with a drop of 2.8 per cent a year earlier. They were helped in the latest quarter by higher food prices.

Last month, Empire announced plans to cut about 800 jobs – or almost 20 per cent of its office staff – as part of its plan to turn around its operations amid rising challenges in the grocery industry including technological change, e-commerce and higher minimum wages. 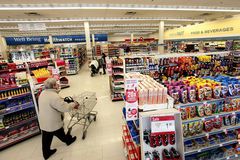 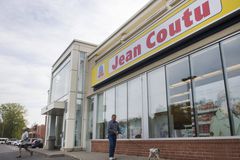