Employees across the nation's capital were locked down in their offices Wednesday, with companies rushing to beef up security and account for staff after the fatal shooting on Parliament Hill.

Businesses of all sizes began confining employees and customers for their safety, from major financial institutions to small businesses. The Rideau Centre shopping mall was bolted shut and the Bank of Canada cancelled its planned monetary-policy-report news conference.

The Royal Bank of Canada, the country's largest lender by assets, said it had put all its buildings in the area of Parliament Hill in lockdown at the request of police, a move that affected five of the bank's locations. RBC monitored the situation through the afternoon, eventually allowing people to leave.

Export Development Canada locked down its building and activated its emergency response protocols. EDC also began calling staff that weren't in the office to warn them of the situation downtown. "Almost all staff were already at work, so it was a small number that were diverted back home," said Phil Taylor, spokesman for EDC. Once everyone was found safe, business continued, he said.

"Ironically, we had a tabletop exercise similar to this not a month ago, so the emergency response group was right up to date on process," Mr. Taylor said. "Just goes to show you the importance of planning for this sort of thing."

Health science company Nordion Inc. locked down its offices and stepped up security measures cutting off some access doors to the building, according to spokeswoman Shelley Maclean. Ms. Maclean considered leaving work to get her children from school around noon, but when schools in the area completely locked down, she decided to remain at her post.

After Bank of Canada Governor Stephen Poloz cancelled his news conference, the central bank was also locked down, but spokesman Alexandre Deslongchamps said he could not discuss the "protocol for security threats and other crisis situations" publicly. Software giant OpenText Corp.'s Ottawa office similarly wanted to keep details of its security policy secret.

Sporting franchises were also disrupted by the attack. The Ottawa Senators hockey team quickly moved to postpone the club's match against the Toronto Maple Leafs Wednesday night. And in Toronto, the Raptors basketball team warned fans to come early to allow for increased security ahead of the preseason game against Maccabi Haifa.

Other sites in Toronto also increased security. CN Tower officials said they would "continue to practice vigilance" in light of the shooting, but noted that high-profile buildings such as the tower must always be prepared to security emergencies. "Visitors coming to the CN Tower may notice a more visible security presence, which we hope will be reassuring," said Jack Robinson, chief operating officer at the CN Tower.

Eventually, tensions eased somewhat during the day and some businesses began to allow employees to exit their offices in the mid-afternoon, although traffic was restricted in parts of the city.

"People had been in their offices since about 10 a.m. and I think some were ready to call it a day," said Mike Barton, manager of communications at Lockheed Martin Canada, as he made his way home. 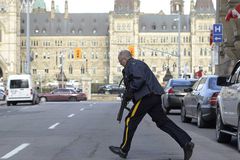 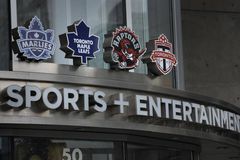