The Beaufort Sea is home to bowhead whales and polar bears, great schools of Arctic char and vast numbers of migratory birds. It's an important part of Canada's northern iconography, a span of water that serves as the western terminus of the Northwest Passage and a harvesting ground for the small Inuit communities perched on its shores.

It is a pristine body of water, and a hazardous one that is covered by thick ice for much of the year. It is not the kind of place you would expect to embrace offshore drilling, especially after its people watched the horrifying images of oil wreaking havoc on the U.S. Gulf Coast last year.

This week marks one year since the explosion on the Deepwater Horizon rig that triggered the massive BP oil spill. It's an anniversary that serves as a grim reminder of the devastatingly high cost when something goes wrong in the deep and unfamiliar frontiers now exploited by the oil and gas industry.

But Canada's Arctic remains remarkably open to development of its deepwater resources – an attitude that is all the more surprising because some of the companies pursuing these difficult deposits of Beaufort oil were also involved in Gulf disaster.

BP PLC and Transocean Ltd., for example, have both worked to bring drill ships to the Beaufort, where BP and Imperial Oil Ltd. have committed to spend $1.785-billion to explore several offshore leases. Their work has been delayed while the National Energy Board conducts an Arctic Offshore Drilling Review, which has seen the regulator travel to some of Canada's most remote communities to hear first-hand how residents of the Far North feel about oil exploration in their waters.

It has heard worry voiced by aboriginal people that, by some estimates, still count on the land and water for half their diet.

Yet in an unexpected stance that stands to benefit the industry's Beaufort efforts, many continue to hope the drills will steam into Arctic waters. Northerners have, in the past, fiercely opposed petroleum development on their land – one need look no further than the anger that met the 1970s attempt to build the Mackenzie Valley natural gas pipeline. But first nations and Inuit groups are now key backers of the Mackenzie line – and an eagerness to attract development to the farthest stretches of the country has, for many, held fast when it comes to offshore oil.

"A lot of our people are optimistic it's still going to happen," said Mervin Gruben, the mayor of the Beaufort shores community of Tuktoyaktuk. The BP spill "hasn't turned people against drilling. It's just taught people to be more aware."

In fact, doubts about whether a Mackenzie pipeline will be constructed may actually have lifted acceptance of Beaufort drilling, as northern residents look beyond the pipeline for potential sources of investment and jobs. The offshore has been viewed by some as a "plan B" if Mackenzie falls through, said Doug Matthews, an energy consultant who specializes in Arctic issues.

Mr. Matthews has been hired by the Inuvialuit, the Inuit of the Northwest Territories, to research a project called "Base for the Beaufort." The project is "looking at what assets need to be put in place to help Inuvik and Tuktoyaktuk become supply bases for ongoing Beaufort exploration," he said.

There is, of course, little doubt that the BP spill has cast a long shadow over the North, and it still haunts the NEB's community consultations. At an early meeting with leaders of the Inuvialuit, the NEB was told "any confidence that had been developed … in industry's ability to safely drill offshore was reset to 'square one' by the Gulf of Mexico incident."

Shortly after the BP spill, the Inuvialuit wrote the federal government, asking for a moratorium on further offshore licence sales until industry could provide a compelling case that it could rapidly seal off an uncontrolled leak and clean up oil spilled in ice-infested waters. The Gulf disaster has prompted a close examination of drilling's benefits by the Inuvialuit, who have found that roughly three-quarters of spending on onshore exploration "sticks" in the North. That means every $100 spent on exploration brings $75 of economic benefits to the region. That number falls to about 15 to 20 per cent for near-shore drilling; in the deep offshore, it is estimated at just 5 per cent.

That is slim local reward for a risk that now seems higher, especially when BP has proven that "when a company feels it finally has things under control, things still happen," said Frank Pokiak, who chairs the Inuvialuit Game Council.

That stark realization has driven substantial debate among northerners in the offshore review. In Sachs Harbour, for example, roughly a quarter of the 100-person NWT hamlet came to voice their opinions, at a time the weather was so cold that school was closed.

"People just wanted to get an idea of what precautions are going to be taken because of the oil spill in the Gulf of Mexico," said Priscilla Haogak, the town's mayor. "If something like that were to happen up here, that would be the ultimate end to our lifestyle."

Yet for many, caution has not bred opposition.

"People have always had the opinion that there could be a balanced approach to development, with necessary conditions for safety and environmental safety," said Nellie Cournoyea, who chairs the Inuvialuit Regional Corporation.

It's an attitude that has crossed generational barriers. Take Kelsey Lucas, for example. The Grade 12 student in Tuktoyaktuk was among the youth who voiced their opinions to the NEB when it came to her school, as it has many others in the region.

Drilling "would affect everyone from the animals to the people to the way of living up north," she said. "But in a way it's good because it will bring more people, more traffic, more money, more jobs."

And, she said, were she able to get oil and gas work, she would take it. 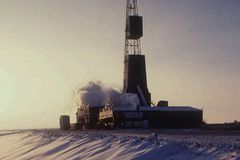 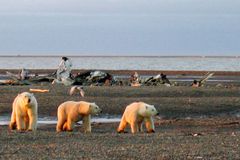