Just like for a Christmas cookie, there's a recipe that goes into the making of a best-selling toy.

Each year, toymakers hope they've found the perfect balance of technology, whimsy and price to appeal to children and their parents alike, sending their products racing to the top of the coveted "Hot Toy" lists.

This year, Montreal-based WowWee Canada Inc. appears to have found the magic formula with Fingerlings, a line of animatronic baby monkeys who respond to touch and sound by blinking, chirping, and blowing kisses.

They were released earlier this year and quickly sold out in stores, prompting frantic online searches by parents looking to secure one of the colourful 12-centimetre-long plastic toys in time for Christmas.

As of this past Friday, various colours of Fingerlings made up three of the top five toys on Amazon.ca, and they've been described as one of the hottest toys of the year by Forbes.com, ToysRUS and Target.

The product's runaway success is not entirely surprising to WowWee's creative director, Benny Dongarra, who was part of the Montreal team that designed the toy.

He said he always believed it would be a huge hit – but, then again, he believes that of every toy he makes.

"It's hard to say, because we've seen that coming with a lot of items, but it actually came to fruition with Fingerlings," he said in an interview at the company's Montreal headquarters.

While the toys are manufactured in China, they were conceived and designed at the historic red-brick building just south of Montreal's Lachine Canal that serves as office and toy lab.

Fingerlings began with a simple idea from brand manager Sydney Wiseman, who'd been watching videos of a South American breed of monkeys called pygmy marmosets, who are small enough to wrap their arms and legs around a human finger.

"She said, 'can we make this into a toy?"' Dongarra recalled. "I said, 'yeah, I think we can do that."' There in the office, surrounded by the toy robots and remote-controlled dinosaurs of Christmases past, they began sketching, 3-D modelling and creating the early prototypes of what would become the Fingerling.

Dongarra said the team knew almost from the outset it wanted the toy to be the same size as the marmoset, to cling to the finger of the person holding it and to respond to them through emotion, sound and touch.

"We were sure pretty early on that we had a winner on our hands – well, on our fingers," he said.

The task of animating the toys fell to people like Anthony Lemire, a mechanical engineer who helped to design the toy's 40 or so sounds and movements.

While WowWee has a long history of designing robotic toys, he says the challenge in this case was to include as many features as possible without surpassing the approximately $20 price tag.

"We want to put as much technology as possible, but not overkill the product," he said.

Once the prototypes were complete, the process shifted from Montreal to the company's Hong Kong office, which oversees the production and assembly.

He said the total process took about nine months – a quick turnaround Dongarra credits to the company's relatively small size.

He believes the toy's popularity is due to its interactive personality and the fact parents like it, too.

"It's cute, it's lovable, it's at the right price point, and your daughter or son is begging for it," he said.

The toy's popularity has prompted WowWee to expand the Fingerlings line, which now includes a unicorn and a sloth.

They've also bumped up production in order to get more of the products on the shelves before Christmas.

But their success has also meant having to crack down on counterfeiters after a number of shoppers reported having been fooled into purchasing fakes online.

The company sued 165 counterfeiters earlier this fall, and CEO Richard Yanofsky has said the firm has notified customs officials around the world to try to stop fakes coming from China, where the authentic ones are also made.

"Now that kids are so used to technology, when you can embed technology into a traditional toy it seems to add another layer," said Liem, NPD Group's toys director.

She said most of the "must-have" toys in recent years have had an interactive element, but stresses it's impossible to predict with total certainty which ones will capture kids' imagination.

"To be right every time, to predict each one, it's still very hard to know." How to gift it forward during the holidays
November 30, 2017 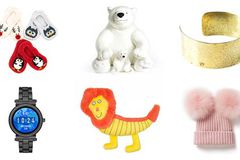 Wonder Woman sword, Spider-Man drone land on safety group’s ‘Worst Toys’ list
November 14, 2017
Report an error
Due to technical reasons, we have temporarily removed commenting from our articles. We hope to have this fixed soon. Thank you for your patience. If you are looking to give feedback on our new site, please send it along to feedback@globeandmail.com. If you want to write a letter to the editor, please forward to letters@globeandmail.com.
Comments