Jim Flaherty looked like an exhausted tourist the last time I spent any time alone with him. We were sitting in the small, private courtyard of his hotel room in Lecce, the baroque city in the heel of Italy, and it must have been 35 C. Mr. Flaherty was wearing shorts and sweating. But being Irish, he was talkative and drinking beer.

It was June, 2009, and he had just finished at the two-day Group of Eight finance ministers meeting. The global financial crisis was still in full swing, but Mr. Flaherty, who died Thursday at the age of 64, didn't want to talk to me about failing banks and the recession. He wanted to talk about jobs, or lack thereof, in his home riding of Whitby-Oshawa, just east of Toronto.

General Motors, the region's biggest employer, had just entered Chapter 11 bankruptcy in the United States and its outright collapse was not out of the question. Chrysler, too, was in deep trouble, but it had just formed a partnership with Italy's Fiat, led by Sergio Marchionne (who would become chief executive officer of Chrysler). "He will drive change at Chrysler," Mr. Flaherty said. "GM is more of a concern because there isn't a white knight there."

He was like that, a working-class boy worried about working-class families – this was not the honourable minister for Bay Street. So why did he clobber the income trust market so beloved by retail investors? I like to think that at least part of the reason was his fear of shifting the tax burden entirely away from corporations and onto individual taxpayers – a sense of fairness, in other words – though I might hold the minority view on this polarizing topic.

Mr. Flaherty became the Conservatives' finance minister in early 2006. At the time, the hot investment trend was the rush to convert corporations into income trusts and float them on the stock exchange. The trusts were structured to minimize their own tax payments. They did so by paying out most of their cash flow to investors (called unit holders) who in turn paid tax on the distributions. The trust market in Canada barely existed in 2000. Six years later, their collective value on the Toronto exchange was $200-billion and every imaginable type of business, from air cargo to sardine canneries, was lunging at trust status.

For the retail mob, trusts were a bit of investment heaven because their tax-free status and fat payouts allowed them to trade at higher multiples. Typically, a trust unit traded 30-per-cent higher than the company share it replaced. Bay Street loved them too. Converting the companies to trusts and flogging their units on the exchange earned them fortunes.

But they had a dark side. The mass conversion to trusts deprived the government of some tax revenue, although the amounts were always a matter of debate. Since trusts paid out almost all of their cash flow, there was little left over for growth, research and development, employee development and the like. They were capitalism for the lazy and feckless, although it was a stretch to call trusts a form of capitalism. Normal companies turned income into capital so they could grow; trusts converted capital into income, preventing their growth.

Their social inequity could not have been lost on Mr. Flaherty. For decades, the share of overall government tax income had been shifting from corporations to individuals. In the 1960s, total corporate tax revenue in Canada was 60 per cent of the total personal tax revenue. By the middle part of the past decade, the corporate share was down to 30 per cent. Now you know why your parents and grandparents could afford a decent house on one income and today you can't on two. The income trust extravaganza threatened to shift the tax balance even further against individuals.

In 2006, Mr. Flaherty said: "We think the people of Canada are overtaxed." Indeed, compared to corporations, they were wildly overtaxed. In October of that year, he effectively killed off the income trust market by levelling their tax level with that of corporations. Socially and economically, it was the right thing to do.

Mr. Flaherty's move made him the investment industry's public enemy No. 1 for a long time. I asked him if it was true that he received death threats. "Sure did," he said, noting that security guards became part of his life for a while.

Was Mr. Flaherty a better finance minister than Paul Martin, who was finance minister until 2002? Mr. Martin killed the proposed 1998 bank mergers, which would have turned the Big Five into the Really Big Three; that was a ballsy decision too. Allowing them to merge would have drastically reduced banking competition and encouraged them to use their new-found bulk to buy even bigger banks in the United States, where they would have blown their brains out.

Jim Flaherty was the glue that bound the Conservative Party together
Subscriber content
April 11, 2014 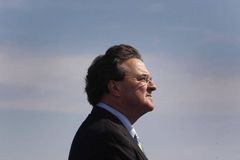 Regan Watts on Flaherty: ‘Your public service was good for Canada’
April 11, 2014 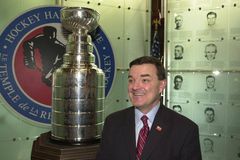