He's not a CEO, a prime minister, or a financial wizard. He doesn't even have a steady salary.

But an enterprising young Canadian, who has carved out a social-media career with a twist, has scored a high-profile invitation to next week's World Economic Forum in Davos, Switzerland, where he will meet and mingle with business leaders and heads of state.

Shawn Ahmed, a 29-year-old video blogger based in Richmond Hill, Ont., was chosen this week as the winner of the 2011 Davos Debates. His prize was based on a YouTube video he submitted about how corporations and charities need to bridge the "digital divide" in poor countries.

The judges received more than 100 video essays on poverty, climate change and a host of other issues. The prize was an invitation to take part in the annual meeting of the world's elite - a venue any professional, in any industry, would likely welcome.

Mr. Ahmed has been travelling to Bangladesh since 2007, posting on-the-ground videos as part of his one-man "Uncultured Project." The project has given a voice to rural Bangladeshis, earned 2.6 million views online and helped raise money for development projects.

He also has more than 270,000 Twitter followers, which is about how many UNICEF has.

Even before he hops on a plane for Switzerland, he already has a date booked with Microsoft, an interview set with CNN, and an audience scheduled with Klaus Schwab, the forum's founder.

As the Davos Debates winner, he will also help bloggers in the Davos social-media centre and participate in a discussion forum.

Mr. Ahmed hopes to spread his message about how mainstream charities need to better make use of social media.

His self-styled career as an independent interlocutor between Web users and the world's poor - so far largely subsidized by his family but also with some corporate donations of equipment - has now given him a voice among the world's top decision-makers.

A few years ago, he was a graduate student in sociology at Notre Dame University, in South Bend, Ind. The son of an Imperial Oil executive, he was born in Sarnia, Ont., and raised in Bedford, N.S. and Markham, Ont., before completing his undergraduate degree at the University of Toronto.

One day, economist Jeffrey Sachs give a speech at Notre Dame about ending extreme poverty around the world. The talk changed Mr. Ahmed's life - he left academia and headed to Bangladesh, his parents' homeland, with little more than a laptop and a camcorder. He stayed with his grandmother.

Mr. Ahmed says the way many charities that help developing countries chose to communicate - mainly with guilt-driven television ads with images of crying children - is too negative and simply doesn't work with the social-media generation. "I didn't think that message would resonate with people. And I started a project to try to prove that there's a better way to talk about poverty."

He took a different approach, and decided to allow the people he met while travelling in rural Bangladesh speak for themselves, and directly to audiences on the Web. He says the direct connections between Bangladeshis and donors recreates the way many Bangladeshis give to charity themselves - directly to a person in need. It also allows them to upload "thank you" videos.

A recent video highlighted the story of a young boy whose school was destroyed by the cyclone that hit Bangladesh in 2007, and how exposure on YouTube attracted donations to rebuild the school.

He works closely with the U.S. arm of Save the Children, which he says has endorsed his approach and worked on the school project. But he said other charities are reluctant to work with him. According to his blog, he told a forum of charity workers last year that when he approached the American Red Cross about working with him in Haiti, "I was dismissed as 'just some guy on YouTube.' " (The two have since made amends, Mr. Ahmed said.)

U of T business professor Don Tapscott, a Davos regular and the author of MacroWikinomics: Rebooting Business and the World, said Mr. Ahmed is anything but another YouTube flash-in-the-pan.

"As the person who coined the term 'digital divide' 15 years ago, I've got to agree with him," Mr. Tapscott said, saying new technology means global institutions, including charities, will need to become more collaborative and less top-down. "… Leaders of old paradigms have great difficulty embracing the new." 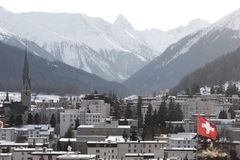