A former federal Liberal politician has agreed to pay $100,000 to the Ontario Securities Commission to settle a case that centred on improper stock trading.

Anthony (Tony) Ianno, who represented the Toronto riding of Trinity-Spadina from 1993 to 2006, was reprimanded during a hearing on Friday after facing accusations of engaging in trading that inflated the share price of medical device company Covalon Technologies Inc.

Half of Mr. Ianno's settlement will go toward the costs of the OSC investigation, said OSC senior litigation counsel Alexandra Clark.

Mr. Ianno is also banned from trading securities for five years, except for limited trading through his Registered Retirement Savings Plan. He is also prohibited from serving as a director, officer or promoter of a publicly traded company for five years.

"I think the sanctions are within a reasonable range," OSC vice-chairman James Turner said.

In March, 2010, the OSC alleged the former MP artificially inflated the share price of Covalon. Mr. Ianno had purchased roughly four million of Covalon's common shares in transactions worth $7.6-million at various times in 2007 and 2008. The Mississauga-based company, which lists its stock on the TSX Venture Exchange, develops medical technologies for wound care, tissue repair, infection control and disease management.

The OSC has said the lion's share of Mr. Ianno's share purchases were made on margin, meaning they were purchased using credit provided by various brokerage firms. Those loans were then secured against the value of the shares.

According to the settlement agreement, Mr. Ianno received a margin call from a brokerage requiring him to deposit more cash into his account following a drop in Covalon's share price.

While only a single margin call was admitted by the parties as agreed facts in the final settlement agreement, the OSC's original statement of allegations stated Mr. Ianno had received approximately 27 margin calls from eight different brokerages.

Consequently, he was accused of making end-of-day purchases through multiple brokerage accounts that often resulted in increases in Covalon's stock price.

The OSC's Ms. Clark told the hearing the problematic trading took place over a 10-month period between June, 2007, and April, 2008, and was conducted with an eye to "maintaining or increasing" the value of Covalon's stock.

His lawyer, Jay Naster, told the hearing that Mr. Ianno unknowingly made the inappropriate trades but stressed there was no manipulation on his part.

"While Mr. Ianno now understands and acknowledges that the trades at issue were contrary to the public interest, at the time of engaging in the trades, Mr. Ianno had no such knowledge," he said.

While the OSC had said in its original statement of allegations that Mr. Ianno continued to engage in the inappropriate late-day trades despite warnings from brokerage representatives, Mr. Naster said his client was not properly informed that his transactions were problematic.

In fact, he noted that no brokerage representatives refused to execute the trades and, in fact, earned commissions off those transactions.

Moreover, he added that Mr. Ianno was a long-term investor in Covalon, who suffered steep losses amounting to roughly $5-million. "In short, the trading at issue represents an isolated issue for a person who has otherwise enjoyed a distinguished and exemplary reputation in the community."

Mr. Ianno, who was dressed in a dark suit and blue shirt, looked humbled as he stood to be formally reprimanded. He declined to provide further comment on the settlement agreement after the hearing.

After serving 13 years as an MP, he lost his seat in 2006 to New Democrat rival Olivia Chow, the wife of the late NDP leader Jack Layton.

While Mr. Ianno's wife, Christine Innes, ran as the Liberal candidate in Trinity-Spadina in subsequent federal elections, she was unsuccessful in defeating Ms. Chow. 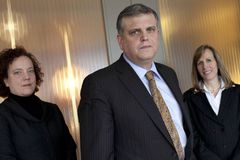