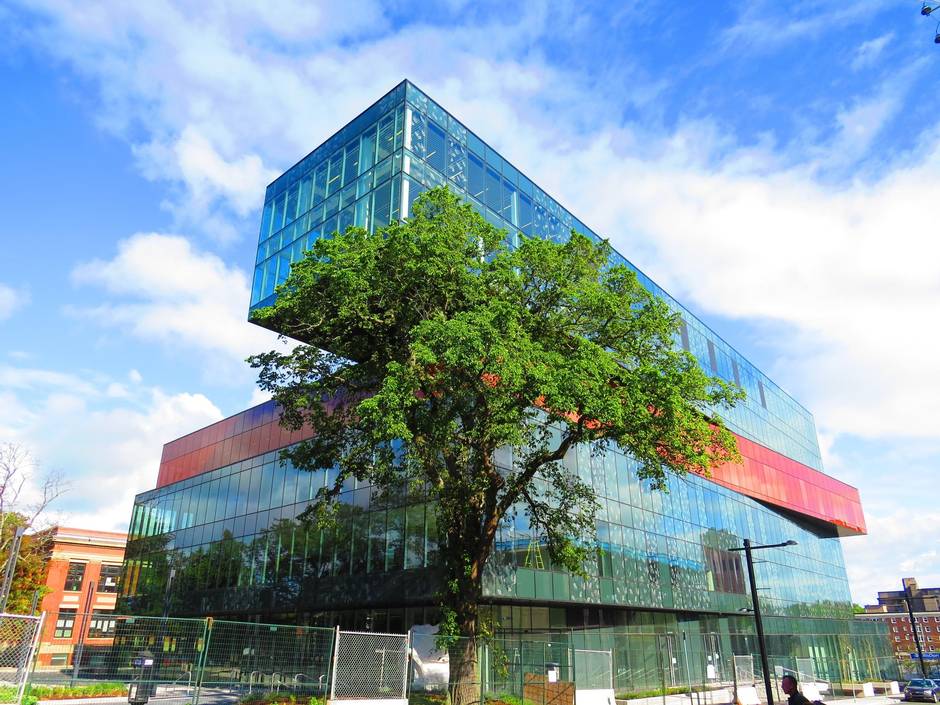 The new Central library in Halifax opened in 2014. Naming rights have long been a fundraising staple for civic assets such as recreation facilities and stadiums. But for public libraries, this is a new game. (Andrew B. Conrad)

When it opened in 2014, Halifax’s new Central Library became an overnight landmark – a dramatic, $57.6-million, 120,000-square-foot collaboration between Canadian and Danish architects that played a key part in reinvigorating the city’s downtown.

Calgary’s under-construction Central Library will be twice as large as Halifax’s upon completion next year, with a price tag more than four times as large, at $245-million.

Up the road, Edmonton is gutting and largely rebuilding its flagship downtown branch, the Stanley A. Milner Library, at a cost of $69-million.

Their hefty budgets are being satisfied in part by exploring new territory for Canadian public libraries: granting corporate and individual naming rights for building elements. In the process, they’ve had to confront a host of unfamiliar issues, from pricing to public perception.

“Libraries are very new to this game,” says Asa Kachan, chief executive officer of Halifax Public Libraries. “Our own campaign was on a scale well beyond anything we’d done previously.”

Halifax Public Libraries launched its “Share the Wow” campaign in 2014, aiming to raise 10 per cent of the Central Library’s budget by soliciting donations, “from a child’s birthday money to $1-million corporate donations,” says Ms. Kachan. 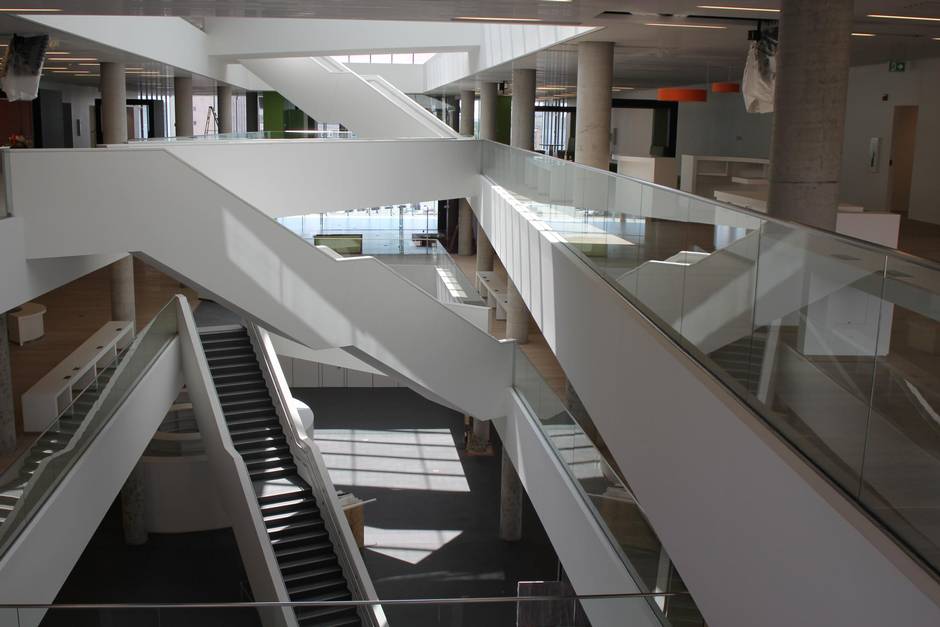 Winding staircases in the new Central Library in Halifax. More than 50 areas within the library – from small study pods to a 300-seat lecture hall – have been designated as opportunities for big-spending donors to obtain recognition signage or naming rights. (Andrew B. Conrad)

Almost two-thirds of that money has come from major gifts of $50,000 or more. More than 50 areas within the library – from small study pods to a 300-seat lecture hall – have been designated as opportunities for big-spending donors to obtain recognition signage or naming rights. Unlike the system’s other branches, the Central Library is replete with named spaces: among others, the RBC Learning Centre, the Southwest Properties Reading Lounge, and Paul O’Regan Hall, named for the founder of O’Regan’s Automotive Group, a chain of car dealerships which contributed $1-million.

“For us to achieve a building with the quality of finishes we have, and provide the most outstanding service, required investment from all three levels of government,” says Ms. Kachan. “But that little extra push, from private and corporate donations, really helped it to go over and above.”

The Calgary Public Library Foundation’s “Add-In” campaign is seeking to accomplish something similar, but even more ambitious – to raise $350-million across the entire 18-branch system. Six years from its 2011 launch, the campaign has reached $304-million, with $275-million from public-sector financing, and the remainder from the private sector, including $10-million in individual and corporate naming rights.

The campaign’s focus now is on the Central Library, a quarter-billion-dollar showpiece for the city’s revitalized East Village neighbourhood.

“We want the philanthropic community to see the library as the next great strategic philanthropic investment,” says Brent Buechler, vice-president of the Calgary Public Library Foundation, created in 1999 to solicit charitable contributions to supplement the library’s public funding.

The foundation is aiming for 60 to 75 namings in the new central library, of which “about half are spoken for,” says Mr. Buechler. “They range from $25,000 for the smallest gift to eight figures.”

Spaces so far include the TD Great Reading Room, the BMO Community Room, the CNOOC Nexen Digital Corridor, and the Shaikh Family Welcome Gallery, so far representing the largest gift, at $1-million. 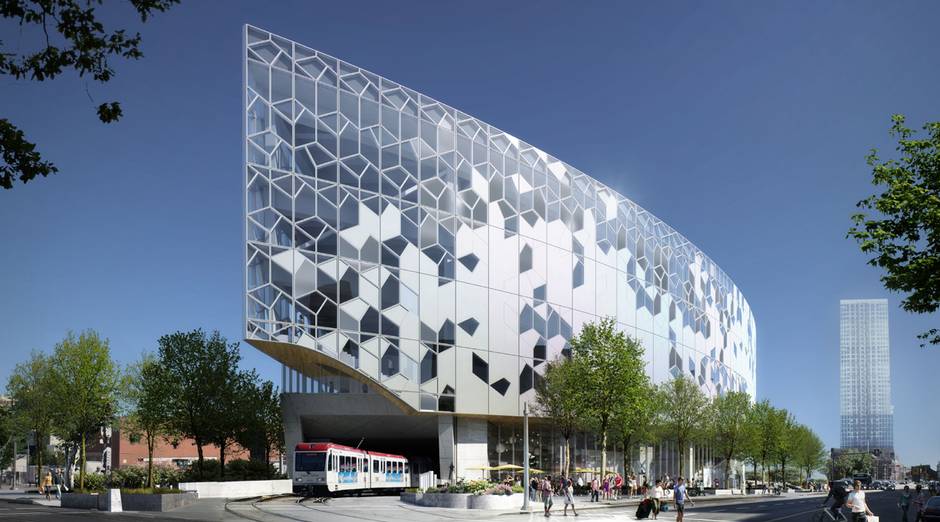 A rendering of the Central Library in Calgary – a showpiece scheduled to open next year in the city’s revitalized East Village neighbourhood. Of the 60 to 75 namings of building elements in the new central building, about half are spoken for. (MIR, architects: Snøhetta + DIALOG)

At Edmonton’s revamped downtown library, there will be between 10 and 15 major naming opportunities, including a gaming room, a culinary centre, a children’s library, and a 250-seat theatre. It will be the library’s first exploration of naming rights on “such a significant scale,” according to Tina Thomas, Edmonton Public Libraries’ executive director of strategy and innovation.

Naming rights have long been a fundraising staple for civic assets such as recreation facilities and stadiums. But for public libraries, this is a new game, and it reflects a growing “Americanization” of fundraising, according to Dan Shaw, a lecturer at Dalhousie University’s Rowe School of Business, in Halifax.

“We’re 15 or 20 years behind the U.S. on this,” says Mr. Shaw. “We’ve seen it with hospitals and universities, and now other institutions.”

As a result, there’s little precedent when it comes to determining what library spaces may be worth to donors. “They’ll have to think, ‘So we’re the main library in this mid-sized city: How many people will be walking or driving by, how many people coming per year, how big is the space?’” says Mr. Shaw. “They’ll have to get used to thinking with a business mindset.”

In both Halifax and Calgary, the price tags for various building elements are based on similar factors: square footage, location and visibility, traffic flow and construction costs.

Besides pricing, the strategy requires new consideration of the ethics of naming public spaces for individual and corporate donors.

In Halifax, a new policy was created specifically to guide naming and recognition in the new Central Library, while in Calgary, the library’s existing naming policies were updated. Both libraries require approval of the library board or CEO for the largest naming agreements, and both prohibit the use of corporate logos, to prevent the perception of advertising. Neither will permit an entire building to be named in exchange for a corporate donation.

In both libraries, there is an awareness of the critique that private-sector and corporate philanthropy could come to supplant public-sector funding. Ms. Kachan feels that that at the moment, at least, it’s all upside.

“This kind of fundraising engages our community in a more personal way,” she says. “It’s always important to be watchful, but at the moment I feel this augments core funding, and hasn’t replaced it. It allows us to move beyond the practical and to the extraordinary.”