George Weston Ltd.'s profit in the fourth quarter was cut by two-thirds as a result of special items including the cost of a $25 Loblaw Card program launched in compensation for the company's involvement in a price-fixing scheme.

The Toronto-based food processing and grocery company says net income attributable to common shareholders of the company dropped to $28-million or 22 cents per share.

Excluding certain items, George Weston's adjusted net earnings available to common shareholders were up by $24-million to $228-million, or $1.78 per common share.

Analysts had estimated $1.67 cents per share of adjusted earnings, according to Thomson Reuters data.

George Weston's results were affected by the admission that it and its main subsidiary, Loblaw, had participated in what they say is an industry-wide arrangement to co-ordinate the price of bread for at least 14 years.

Days later, the grocery chain issued $25 Loblaw Cards to consumers to compensate for manipulating the cost of bread contrary to the Competition Act.

The cards reduced George Weston's fourth-quarter profit by $39-million or 30 cents per share.

The quarter also included $75-million in costs, or 58 cents per share, related to a merging of the Loblaw and Shoppers Drug Mart loyalty points programs and increased restructuring items totalling $78-million or 61 cents per share.

George Weston sales were down one per cent to $11.4-billion from $11.5-billion, mostly from its Loblaw operations and $527-million from its Weston Foods bakery and food processing unit.

Galen G. Weston, who is chairman and CEO of George Weston, said that Weston Foods results were "as expected" and its frozen business had stabilized in the fourth quarter.

In November, he said that problems within some of its frozen foods operations were bigger than anticipated and added that it would take "some time" to get the business back to a "satisfactory trajectory."

Weston said in Friday's announcement that Weston Foods has launched a three-year transformation program to "position us to become a premier North American bakery, and deliver strong financial performance in the long term." 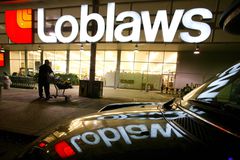