Ailing Golf Town, which received court protection from its creditors on Wednesday, has a deal to be sold to its debt holders with a plan to close or shrink an undisclosed number of stores while letting go some employees.

Canada's largest specialty golf retailer, which has struggled with falling sales and profits amid declining interest in the sport, is set to be acquired by investment firms Fairfax Financial Holdings Ltd. and CI Investments Inc. The proposed sale comes as U.S. parent Golfsmith International Holdings Inc. also filed for bankruptcy protection south of the border, opening the way for it to shut 20 of its 109 stores by the end of October, with other closings or downsizings being contemplated.

In Canada, Golf Town has fared better than its U.S. parent, which faces more competition, but troubles remain for the Austin, Tex.-based company, which includes the Golfsmith and Golf Town chains.

"As a result of industry and competitive trends, the company's net sales have declined in each of the past three fiscal years and its [profit] margins have come under pressure."

Golf Town, with 55 mega-stores, has been struggling to draw customers in a sluggish golf industry while battling rising online competition. On Wednesday, it confirmed it had filed for protection under the Companies' Creditors Arrangement Act in Canada, with the aim to restructure and shrink its store network.

Golf Town has been owned by Ontario Municipal Employees Retirement System's private equity arm since 2007 when it bought the chain for $240-million (Canadian) including debt. The company had 32 stores at the time. Then in 2012, OMERS combined Golf Town with the U.S. Golfsmith business in a deal that added a hefty debt load.

While Golfsmith suffered even when it was acquired by the Canadian chain, Golf Town has cornered a niche market with less competition than Golfsmith faces south of the border.

Mr. Roussy said in a court document that despite the industry challenges, "there are signs of recent improvement in the golf market and expectations for future industry growth."

He said golf participation has stabilized and total rounds played in the United States increased in 2015 from a year earlier for only the second time since 2007. "In 2015, new golfers took up the game at near record rates not seen since the height of golf's popularity in the prerecession period."

Golf Town does not spell out how many stores it expects to close or downsize. But with the shift to more online sales, the chain doesn't anticipate it will need as many large stores in coming years, sources close to the company said. And they said the number of closings will also depend on the extent of concessions Golf Town gets from its landlords. It has 350 full-time and 1,100 part-time employees.

In the past year, Golf Town already has been working on its "Next Generation Strategy" to capitalize on market opportunities, Mr. Roussy said in a court filing. It has closed some stores and downsized others, while launching smaller outlets with a focus on interactive and tech displays, reduced costs and higher profit margins, he said.

And new local management since last year, following the naming of Mr. Roussy as CEO at Golfsmith, is helping improve results, sources said. He is a former executive of Toronto-based Canadian Tire and has a better feel for this domestic market, they have said.

"The company believes that these and other initiatives will strengthen the business and enable it to compete effectively in the new industry environment," Mr. Roussy said in the filing Wednesday.

Golf Town has sharpened product and marketing strategies to better reflect Canadian consumer demand by, for instance, focusing more on trendy fashions, private labels and lower prices, sources said. And it has boosted its e-commerce. 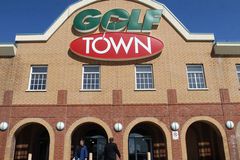 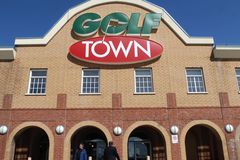 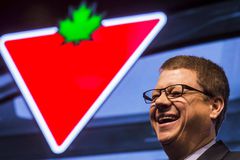