Brad Griffiths, a fixture on Bay Street for more than 25 years, was on the phone last Monday at his cottage in Muskoka talking to his business partner Naeem Tyab about their latest energy venture.

When he hung up, Mr. Griffiths made plans to play a round of golf with his daughter that afternoon, grabbed a Red Bull, jumped in his boat and headed off to do some fishing.

He never came back.

Mr. Griffiths, 55, went missing around noon that day, the only signs a glove and a pair of shoes floating in the water. His body was recovered Saturday evening and police say an autopsy will be done Monday.

For his many friends in the investment world, his death comes at a heart-breaking time. He'd spent the past four years building several companies. One of his ventures, Griffiths Energy International Inc., had just secured two major oil and gas concessions in Chad, in central Africa, and was about to go public.

And he'd overcome years of hard partying by settling down and reconnecting with his family, especially at the cottage on Lake Joseph, 200 kilometres north of Toronto, which Mr. Griffiths bought six years ago and considered his sanctuary.

"He was on his best run ever, both professionally and personally. That's what's most tragic about this," said Perry Dellelce, a Toronto lawyer who has known Mr. Griffiths for more than 20 years.

Mr. Griffiths was among a group of bankers who changed how financings were done in Canada by developing so-called "bought deals," and was one of the founders of the firm that became GMP Capital Inc., one of largest and most successful investment dealers and one of the only remaining independent ones.

After starting out in the investment business with CIBC Wood Gundy in the 1980s, working on mergers and acquisitions, Mr. Griffiths joined Gordon Capital in the late 1980s.

By that time, his deal-making prowess was well known.

"He was a great friend, a great partner, one of the smartest guys I've ever met, and certainly a deal guy extraordinaire," Mr. McBurney said.

"He had the ability to, as we say, break the back of a deal, and figure it out. It's more of a 'how do you do a deal,' and he figured out how you get a deal done."

Mr. Griffiths stayed with Griffiths McBurney until 1999, when he felt his role was becoming too administrative as the company grew.

The company went public in 2003, and is now known as GMP Capital Inc. Mr. Griffiths moved on to Canaccord, then worked at several other companies before starting Griffiths Energy with friends Naeem and Parvez Tyab.

In the spring, Griffiths Energy signed a production sharing deal in Chad, and raised $165-million a few weeks later. Parvez Tyab said the company had more demand from investors than it could accommodate, but capped the deal at $165-million to ensure the company directors maintained control.

Shortly after 12:30 p.m. last Monday, a neighbour looked out onto the water from his cottage and saw Mr. Griffiths waving his arms in distress. Like most of the recreational boaters who traverse Lake Joseph's waters, he wasn't wearing a life jacket. The neighbour saw the motorboat running in circles beside him.

The neighbour rushed down to his boathouse, but by the time he reached the water's edge, Mr. Griffiths had vanished beneath the surface.

Mr. Griffiths was just a few hundred metres from shore when his neighbour last saw him.

Police searched the lake Monday and Tuesday, but found no trace of Mr. Griffiths. OPP divers are only regulated to go 100 feet deep, but the part of the lake where Mr. Griffiths was last seen is three times that depth. The Griffiths family called in an underwater technology company to use sonar and video equipment to scan the bottom of the lake.

Neighbours say they don't understand how Mr. Griffiths fell out of the boat and why he couldn't make it to shore. An autopsy will be performed Monday, police say.

Mr. Griffiths struggled with alcohol through much of his professional life, but friends said he had the problem under control in recent years. "It's no secret he had his demons," Mr. McBurney said. "This business is all about eating and drinking, you know, working hard and playing hard."

Lake Joseph is one of three large lakes in the Muskoka region of Ontario. Its rocky shoreline is dotted with multimillion-dollar cottages, many of which combine dockside boathouses with expansive living quarters. Mr. Griffiths's cottage, which he purchased with his wife for $4.9-million, sits on the shore on the north end of the lake, close to the spot where he was last seen.

He loved all sports and didn't think twice about jetting off to watch a major golf championship, playoff hockey game or NFL game, Mr. Dellelce said.

And he was close with his two daughters, both in their early 20s. The eldest, Kathryn, works out of an office at Griffiths Energy, where she does sales for a Canadian-content film company. His younger daughter Stephanie, recently finished business school and was planning to start working at the company in the fall.

"He always put his family first. He was always a loving father and husband and he would have done anything for us," his daughter Kathryn said. 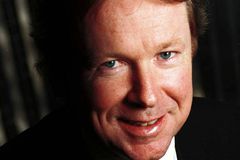