The Greater Toronto Area's real estate market has broken new ground with prices for detached houses soaring to record highs while the debate intensifies over what is behind the boom.

The average price of $1.21-million for detached properties sold in the GTA this past month smashed the former peak of $1.07-million set in January and climbed 32.5 per cent from a year earlier.

"Recall, this is after the federal government took steps last fall to cool demand! If policy makers leave this market to its own devices, there is a real risk that a still-manageable bubble is pumped by rampant speculation into something much more dangerous," Bank of Montreal chief economist Douglas Porter warned in a research note on Friday.

Within the City of Toronto, the price of detached houses last month averaged $1.57-million, easily eclipsing the former record of $1.35-million in November and surging 29.8 per cent from February, 2016.

For all types of residential housing, including condos and townhomes, the GTA had a record average price of $875,983 this past month, up nearly 28 per cent from a year earlier.

"Skipping past the semantics over whether or not to call Toronto a bubble, most reasonable folks would agree that a 28-per-cent surge would not qualify as a normal market," Mr. Porter said.

He argues that increased speculation and foreign investment have combined with low interest rates, steady population growth and sizzling demand in general to produce an extreme imbalance in the GTA.

In suburban Toronto (known for its 905 area code), the price this past month for detached houses sold averaged a new high of $1.11-million, up 35.4 per cent from February, 2016. It marked the first time that the average monthly price for detached properties topped $1-million in the suburbs.

In October, Ipsos surveyed local realtors about foreign-buying activity on behalf of the Toronto Real Estate Board. Realtors told the polling firm that fewer than 4.9 per cent of home sales in the GTA involved international buyers.

But Mr. Porter said in a recent interview that is an important number: "In what is already a very tight and hot market, to add net new buyers can have a very big influence on prices."

The board points out that the GTA's active listings last month plunged to 5,400, down by half compared with 10,902 in February, 2016. The region posted 8,014 sales last month, a new high for the month of February.

While Mr. Porter plays down the impact on the housing-supply side, the real estate industry counters that much more attention needs to be paid to construction instead of placing the spotlight on foreign and domestic demand.

"Supply is longer term, and that's why we see the focus on demand because it is sometimes viewed as a quick fix. But you got to look at both sides of the price-growth equation," said Jason Mercer, the board's director of market analysis.

Mr. Mercer and the Ontario Real Estate Association believe the provincial Liberal government should relax restrictions on the Greenbelt – protected land on the fringes of the GTA.

"It's up to the government to get moving on putting a plan into action that will increase the supply of homes in the GTA," association president Tim Hudak said in a statement.

"Too much red tape is preventing new homes from being built – let's reduce the barriers to building and get more 'missing middle' type homes on the market like townhomes, duplexes and stacked townhomes," said Mr. Hudak, the former Ontario Progressive Conservative leader.

The Vancouver area's sales began cooling off in April, and the slowdown continued after the B.C. government implemented a 15-per-cent tax on foreign home buyers in the region in August. The price for detached houses sold within the City of Vancouver last month averaged $2.67-million, down 5 per cent from a year earlier. Condo and townhome prices, however, have been surging.

In October, the federal government tightened mortgage-lending rules, such as a new standard for gauging whether buyers can handle an eventual increase in interest rates. 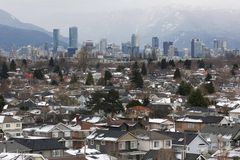 Soaring rents still cheaper than owning a house
April 10, 2017
Follow Brent Jang on Twitter @brentcjang
Report an error Editorial code of conduct
Due to technical reasons, we have temporarily removed commenting from our articles. We hope to have this fixed soon. Thank you for your patience. If you are looking to give feedback on our new site, please send it along to feedback@globeandmail.com. If you want to write a letter to the editor, please forward to letters@globeandmail.com.
Comments