The Canadian programming company that shelled out $345-million (U.S.) this year for a majority stake in all things Charlie Brown and Snoopy has hung out a for-sale sign.

DHX Media Ltd., the Halifax-based children's content producer, said it is launching a search for strategic alternatives, which could mean a sale of all or part of the company, a merger or some other arrangement aimed at boosting value for shareholders.

The move comes less than a week after DHX reported disappointing financial results, which prompted a steep drop in the stock price.

The A and B shares jumped following the announcement on Monday, settling up about 6 per cent on the Toronto Stock Exchange.

Director Donald Wright, who is heading up a special board committee charged with evaluating options, said DHX is not taking the step in response to a specific expression of interest from a third party.

"When your results are not like you want them to be and what have you, there's a certain impetus to look at the value of everything and surface value for our shareholders. We take that responsibility very much to heart," Mr. Wright said.

"But don't get me wrong from that – we as a board have a lot of faith in the businesses that we have and we're going along … on two parallel paths. One is to look at strategic alternatives and the other one is to run our day-to-day business."

DHX, which has a market capitalization of about $740-million (Canadian), distributes TV shows around the world and owns the Family Channel in Canada as well as WildBrain, which specializes in kids' content for YouTube.

In May, it bought the entertainment division of Iconix Brand Group Inc., giving it a majority interest in Peanuts Worldwide LLC and access to programming and beloved characters created by Charles M. Schultz in a media market thirsty for family-friendly viewing and expanding through the likes of Netflix.

The deal also added Strawberry Shortcake to its stable of brands, which includes other such franchises as Teletubbies, Inspector Gadget, Caillou and Degrassi. However, the acquisition increased its debt load, which has concerned investors.

The company stumbled in its fiscal fourth quarter, reporting sales in some segments, including Teletubbies, lagged expectations. In the quarter, it reported a net loss of $18.3-million, compared with a year-earlier loss of $1.7-million. The stock lost a fifth of its value following the release of its results.

Bank of Montreal analyst Tim Casey said last week that DHX is a "show me" story with a turnaround deadline of two years at the latest, given the debt obligations. "We doubt shareholders will give them the benefit of the doubt on success until there is demonstrative progress on de-leverage," he wrote following the financial results.

Despite the weak results, executive chairman Michael Donovan told analysts that the business environment for family-friendly content had never been so positive.

"DHX Media's board of directors is committed to fully evaluating appropriate strategic alternatives while simultaneously supporting the company's management and employees in their ongoing efforts to deliver great and innovative children's content and license the company's brands globally," DHX said in a statement.

The board said it was not putting a specific timeline on the process. Mr. Wright said the company had yet to hire financial advisers. 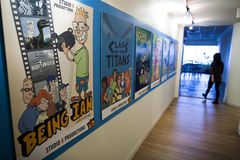