Hudson's Bay Co. has put its flagship store in downtown Vancouver on the auction block, a move that could fetch as much as $900-million and help appease anxious investors.

Toronto-based HBC, which runs its namesake, Saks Fifth Avenue and Lord & Taylor chains among others, has hired real estate advisers CBRE and Brookfield Financial Corp. to find a buyer for its Hudson's Bay store in downtown Vancouver to try to cash in on a hot commercial property market, industry sources say.

The move comes as HBC faces more calls for it to tap into the considerable value of its real estate, including its landmark Saks Fifth Avenue store in New York, as the retailer's stock price languishes amid disappointing financial results and an increasingly difficult retail environment.

An HBC spokeswoman declined to comment. But the six-storey, cream terra cotta building on Vancouver's Granville Street has been valued at between $800-million and $900-million, observers say.

The initiative follows HBC's deal this week to sell the building that houses its flagship Lord & Taylor store on Fifth Avenue in New York for almost $1.1-billion. The sale price was 30 per cent higher than the building's most recent appraisal value.

In an unusual series of transactions, HBC teamed up with office-sharing startup WeWork, which will convert most of the Lord & Taylor building for its own headquarters along with shared office space for others. As well, WeWork will lease the top floors of the Vancouver flagship Hudson's Bay store and two other HBC stores for WeWork's office-sharing operations. (As part of the deals, HBC will get a $632-million investment from a private-equity firm that has partnered with WeWork).

HBC's efforts to monetize real estate with WeWork will help boost productivity of the retailer's space and is "critical to its long-term success," said senior analyst Christina Boni at Moody's.

It's another step by Richard Baker, executive chairman of HBC and a U.S. real estate magnate, to find ways for investors to benefit from the retailer's lucrative property assets. The retailer has valued it real estate at $6.4-billion or $35.24 a share. HBC's stock closed at $11.04 on Friday.

But some investors are getting impatient. Jonathan Litt, founder of activist shareholder Land & Buildings Investment Management LLC, has been pushing HBC to squeeze more value from its real estate, particularly its Saks Fifth Avenue flagship, which HBC has valued at $2.9-billion. Even so, Mr. Baker has said he is not interested in selling the Saks Fifth Avenue store because of its enticing value as a luxury retailer.

Mr. Baker has made other moves on the real estate front at HBC. In 2014, HBC sold its landmark downtown Toronto store and adjacent office tower to landlord Cadillac Fairview Corp. for $650-million.

A year later, HBC formed joint ventures with Toronto-based RioCan Real Estate Investment Trust and Indianapolis-based Simon Property Group Inc. valued at the time at $4.2-billion. However, the initiatives haven't led to the properties being spun off into a separate REIT, to the disappointment of many investors.

Still, some observers question HBC's weak retail performance. Mark Petrie, an analyst at CIBC World Markets, said the retailer is on a better footing with its latest partnership with WeWork, whose office space tends to draw millennials who may also shop at the stores.

"But substantial uncertainty remains about the underlying health of the retail business," Mr. Petrie said.

HBC plans to continue operating the Vancouver store and lease it back from the new owner, as it does at the Toronto downtown store, sources said. The retailer would use the proceeds from the sale for another acquisition or to buy back shares or pay dividends to shareholders, they said.

The 650,000-square-foot historic store with Corrinthean columns features luxury women's wear the Room and prominent boutiques of such brands as Coach and TopShop. 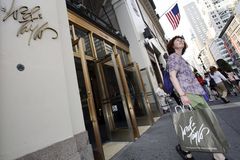