Hudson's Bay Co. is taking steps to drive up the price of its flagship Vancouver store as it officially puts a "for sale" sign on the property.

In its first formal proposal to sell the standalone store, the Toronto-based retailer opened the door to redevelopment and building on top of the cream terracotta building with Corinthian columns. That move is designed to extract more value for the real estate in downtown Vancouver.

HBC – which runs Saks Fifth Avenue, Lord & Taylor and its own eponymous department store chain among others – has been under pressure to redevelop or sell some of its properties to bring in more revenue from its real estate.

Plans to sell the Vancouver building were first revealed last October. HBC would lease back the property, use the bottom four floors for retail and sublease the top two floors to office-sharing company WeWork. At the time, HBC did not say whether it would permit redevelopment of the store, which is a heritage building and cannot be demolished.

"Potential to unlock additional density through rezoning of the property," HBC's brokers said in a recent brochure sent to clients and viewed by The Globe and Mail.

The 11-page document said the redevelopment "may include mixed-used possibilities, as achieved by" other Vancouver properties that have added residential or office space to the existing structure such as the city's old stock exchange.

Also deemed a heritage building, the stock exchange now has a 31-storey glass tower on top of the original structure that will be primarily used for office space.

It is not clear how a new owner will redevelop HBC's Vancouver store. The retailer has said "any possible sale would include the continued operation of Hudson's Bay at this property." Also, developers must protect the heritage aspects of the building and the view of the city's North Shore mountains, downtown skyline and surrounding water.

Further complicating matters is HBC's deal with WeWork. It is not known how long WeWork will be subleasing the top two floors or whether a renovation is possible while HBC and office-sharing company are leasing the space. HBC would not disclose the terms of its leases and said "the decision to build would belong to the building owners." The company reiterated plans to operate the HBC department store at the current location. Nevertheless, demand for all types of property in downtown Vancouver is hot and the HBC shop is in the heart of the action.

"I would expect they would attract a lot of interested parties. … The key there is going to be what's the long-term plan for that property given its location," said Ashi Mathur, deputy head of investment banking at Bank of Montreal. "Any time you can add density in a major metro, that's going to impact value."

As with other department chains, HBC is scrambling to reinvent itself amid changing consumer behaviour and increased competition from discount stores and online retailers.

As part of the WeWork deal, HBC sold its key Lord & Taylor building in Manhattan to the office-sharing company and private-equity firm Rhône Capital. WeWork will convert most of the New York building for its own headquarters.

The Vancouver store brochure did not provide an asking price. But sources have said it has been valued between $800-million and $900-million. HBC is pursuing the sale as its stock trades around $12 apiece, which is about one-third lower than its trading price in 2015.

CBRE and Brookfield Financial have been hired to run the sale process. They did not immediately respond to a request for comment. 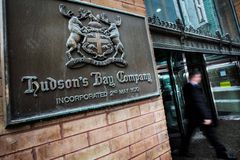 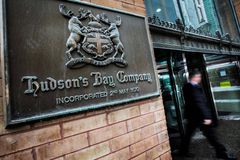