The railway executive behind the company whose train smashed into Lac-Mégantic wants people to know he's been suffering, too.

Looking back at the year as it comes to a close, Ed Burkhardt said he's still troubled by the Quebec derailment and has thought about it every day since the July 6 catastrophe killed 47 people and destroyed part of the town.

"They had every reason to be very upset with what had occurred," Burkhardt said about the anger directed toward him by the people of Lac-Mégantic.

"But what they didn't know was that I was equally upset and I was also a victim of this whole thing."

Burkhardt, who said he is the largest shareholder in the now-insolvent MMA, explained that he lost his entire investment after the crash forced the company to file for bankruptcy protection.

"That's a big pile of money, I might say," Burkhardt, the president of MMA parent company Rail World Inc., said in a phone interview from his Illinois office.

"It's reduced me from being a fairly well-off guy to one that's just getting by. But OK, that's what happens."

He added, however, that he wasn't complaining about the hit he took to his bottom line, insisting he didn't want to criticize the people of Lac-Mégantic because "they went through hell."

"(Financial losses are) not in the same category as the personal losses, the deaths and all of that, that people suffered in Lac-Mégantic," he said.

His brief stop in the town in the aftermath is perhaps best-remembered for his tumultuous news conference, during which he was heckled by irate locals.

Burkhardt, who also faced criticism for waiting more than four days before visiting the town after the crash, had anticipated the rough reception. He defended his delayed appearance, saying he was dealing with the crisis from his office.

Before travelling to Lac-Mégantic, Burkhardt even quipped that he'd probably have to wear a bulletproof vest during his visit.

Burkhardt displayed his straight-shooting style in the middle of the news conference when a reporter asked him how much he was worth, financially. He replied: "A whole lot less than I was Saturday (the day of the derailment)."

Reflecting on his reputation in Lac-Mégantic, Burkhardt believes local anger was directed at him because, as chairman, he was the voice of the company.

"I think I assumed too much of a personal role up there, so I guess I was the magnet for all of the people's unhappiness, which is not terribly surprising," the railway boss said.

He then repeated an allegation he first made publicly at that July news conference: the train driver didn't do his job properly the night of the disaster.

"They view me terribly, but I wasn't the guy who didn't set the brakes on the train," he said.

Burkhardt has alleged that the driver did not apply enough handbrakes before the train broke loose and barrelled about 10 kilometres down a hill into Lac-Mégantic.

Tom Harding, the train's driver, was suspended by MMA following the accident. Harding's lawyer did not respond to a request to comment on Burkhardt's allegation.

Firefighters from the neighbouring town of Nantes have said they responded to a blaze on board the train hours before it came off the tracks in Lac-Mégantic. MMA has suggested the fire department's decision to shut off the locomotive to extinguish the fire might have disabled its air brakes.

Police and federal transport safety officials are conducting investigations into the crash.

In the months since the disaster, Burkhardt says he's questioned whether his trains should have ever been transporting crude oil.

"I've asked myself a number of times as to whether we should have been handling this oil at all," Burkhardt said.

"Hindsight is 20-20 vision, so at this point I wish we hadn't been handling oil. We would have obviously not been exposed to such a situation."

MMA stopped hauling oil after the crash, but Burkhardt noted that other Rail World operations in Europe have continued to transport other highly explosive cargoes, like propane.

Canadian authorities have indicated that the deadly oil in Lac-Mégantic proved to be as flammable as gasoline, though it had been improperly labelled as something less volatile.

"There's always going to be risks in handling dangerous commodities," he said.

Burkhardt said he welcomes the fresh debates over regulations for the rail industry, as long as any eventual changes are harmonized in Canada and the United States.

For example, he thinks tank-car construction needs to be improved, though due to the high costs he expects any transition to a more-durable tanker to take a long time.

He also encouraged more testing of operating employees, with particular attention placed on brake management and in preventing runaway trains.

Still, he thinks it should be up to railway managers to enforce any changes, rather than a heavier-handed approach by regulators.

"I put the pressure on the management, not on the regulator," Burkhardt said.

"I don't want the regulator telling me what to do. I want to figure this out within management."

MMA and Rail World executives, including Burkhardt himself, are among those named in pending lawsuits in Canada and the United States over the Lac-Mégantic crash.

The insolvent MMA has filed for bankruptcy protection and is now under trusteeship, though it continues to manage its day-to-day operations. MMA is expected to be sold off in the coming weeks.

There are concerns in Lac-Mégantic that a new owner could eventually resume oil shipments in the area. MMA's train service recently returned to the community, though it will no longer carry dangerous freight through town.

Burkhardt said the railway's next owner will need additional traffic along the line for it to be profitable. It will be up to them, he added, to decide whether to start hauling crude oil again.

On that question, he doesn't think the door should be forever closed to moving oil on the MMA line.

Burkhardt said MMA's decision to stop handling oil after the derailment was made easy by the fact it was unlikely to be commercially viable under the circumstances.

"Obviously, the shippers were just as horrified as we were by what occurred and probably wouldn't have used our services anyway," he said.

"Although the risks of moving over some other railroad to destination are probably just as great." 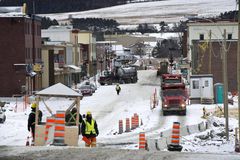 Lac-Mégantic has a reluctant rebirth as first trains roll through town
December 18, 2013 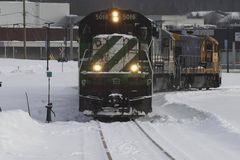