The European Union acted on a competition probe Tuesday that has been underway since 2010 when shopping startup Foundem, which provided price comparison services, filed an official complaint against Google.

Seven years later, Competition Commissioner Margrethe Vestager was succinct in her findings: "Google has given its own comparison shopping service an illegal advantage by abusing its dominance in general Internet search. It has promoted its own service, and demoted rival services. It has harmed competition and consumers. That's illegal under EU antitrust rules."

There was more from Ms. Vesteger: "It denied other companies the chance to compete on the merits and to innovate. And most importantly, it denied European consumers a genuine choice of services and the full benefits of innovation. … This decision requires Google to change the way it operates, and to face the consequences of its actions."

A €2.42-billion ($2.75-billion U.S.) fine, the biggest in an EU competition case. Now, Google made almost $90-billion (U.S.) in revenue in 2016, but the EU calculated its fine based on the company's European revenues from the comparison shopping service. It gets much more expensive if Google doesn't comply with the order within 90 days: further fines start arriving every day calculated as 5 per cent of its daily average global revenue (more than $12-million a day).

"We respectfully disagree with the conclusions announced today. We will review the Commission's decision in detail as we consider an appeal, and we look forward to continuing to make our case," said Kent Walker, Google general counsel, in a blog post.

How were consumers harmed?

They probably weren't hurt directly. Many of the most dominating Internet companies prefer to use their market power to crush rivals, not raise prices on consumers, as is outlined in the recent book Move Fast and Break Things by Jonathan Taplin, director emeritus of the Annenberg Innovation Lab at the University of Southern California.

"In America we've taken this stance that the only thing that matters is what [former U.S.] Justice [Robert] Bork called consumer welfare; essentially the idea being that if Amazon bought every retailer in the whole nation but prices didn't rise, then it would be okay," says Mr. Taplin, reached by phone at the Aspen Ideas Festival. "The EU is going back to the more classic view, of what anti-trusts were, that you need to maintain competition in the marketplace, and that government needs to protect the smaller player against the bigger and more powerful player."

In a world where Facebook has more than two billion users and is doing its level best to copy every feature of the much-smaller Snapchat to drive the rival social network out of business, there are clearly steep barriers to competition, Mr. Taplin said. "There is no market solution to these problems, nobody's going to start up a startup to challenge Google … no one is going to take on that suicide mission."

Is it over now?

No, Google has two more EU probes on the horizon, one about its search ad business, the goose that lays the company's golden eggs. The other for its dominance in smartphone operating systems, which offers less direct revenue to Google, but which puts its software and essential services front and centre in about 80 per cent of the 362 million new handsets sold in 2016. If Tuesday was any indication, Google could be facing more orders to change its business or pay up.

This excerpt from a letter penned by several big tech and media companies offers some tough medicine: "Google and its allies will no doubt continue to press through its lobbying and public relations machine the fiction that any adverse decision amounts to European 'protectionism.' As U.S. based companies, we wish to go on record that enforcement action against Google is necessary and appropriate, not provincial. We have watched Google undermine competition in the United States and abroad. Google operates on a global scale and across the entire online ecosystem, destroying jobs and stifling innovation."

Also among the signatories was News Corp., whose CEO, Robert Thomson, tore into Google at a London tech conference on June 14, alleging Google's claims that its search algorithms were neutral is an elaborate fiction: "There is a contradiction between the claimed sophistication of Google's ability to target audiences and track taste for advertisers and its inability to identify the tasteless, the terroristic, the perverted and the pirated."

Not all rivals are happy

Notably, Microsoft Corp. did not sign the letter – even though it lobbied for almost five years, under then-CEO Steve Ballmer, against Google at the EU and other national competition bodies.

But on April 22, 2016, Microsoft confirmed reports that it had agreed to stop working against Google. "Microsoft has agreed to withdraw its regulatory complaints against Google, reflecting our changing legal priorities," the company said at the time. "We will continue to focus on competing vigorously for business and for customers."

Just days earlier, Canada's Competition Bureau had decided against taking any regulatory action against Google's search ad business, despite years of lobbying for action from Microsoft and other tech rivals. The U.S. FTC ended probes into different Google businesses in 2002, 2010 and 2013, in some cases after receiving assurances of voluntary business practice changes.

From Google to Gazprom, challenging the world’s most powerful companies
February 18, 2016 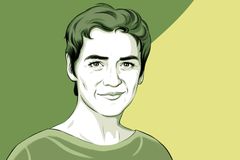