The company's Home Trust subsidiary has three outstanding issues of deposit notes with a total value of $800-million, which have been trading furiously over the past week at a significant discount to their face value.

One of the notes matures in less than three weeks, on May 24, requiring Home Trust to repay holders a total of $325-million. The other two issues of notes, with a total value of $475-million, mature in March and December, 2018, and are a less pressing cash problem.

Read more: The rise and fall of Home Capital

Deposit notes are financial instruments issued to investors by financial institutions and are classified as deposits payable on fixed dates, similar to guaranteed investment certificates, but also trade in the secondary market like bonds.

Home Trust's May 24 deposit notes have a coupon rate of 2.35 per cent, but are trading at a significant discount to their face value – which means higher yields for investors – because the market perceives there are risks for those holding the troubled company's debt.

The notes maturing May 24 traded in a range between 89.75 and 94.875 cents on the dollar on Tuesday, according to bond trading data provided by the Investment Industry Regulatory Organization of Canada.

Most of the volume of trading in the deposit notes is being driven by institutional buyers as hedge funds and other higher-risk investors snap up notes being sold off by more conservative holders, according to a source who has been buying the notes.

More than $35-million par value of the May 24 notes traded on Tuesday alone, which was the same day Home Capital announced it would delay the scheduled release of its financial statements until May 11. Bond rater DBRS Ltd. downgraded Home Capital's senior debt and Home Trust's rating on Wednesday, saying it saw the earnings delay as a negative factor.

Many investors are also selling off Home Capital's shares for similar reasons, fearing the company may not be able to secure new long-term financing or a buyer before it runs out of cash. Home Capital's shares fell a further 83 cents or 12 per cent on the Toronto Stock Exchange Thursday to close at $6.01 and are now trading at less than a quarter of their $26.03 value at the end of March.

RBC Dominion Securities analyst Vivek Selot said his firm has fielded "a number of questions" from investors in recent days about the claims hierarchy of financial institutions' deposit notes in the event of a liquidation. In a research note Wednesday, Mr. Selot said deposit note holders rank equally with other depositors in a liquidation, and all are unsecured creditors.

In any financial institution liquidation, claims owed to federal and provincial governments rank highest, followed by claims from depositors and holders of deposit notes. Other subordinated liabilities rank third, while payments of fines and penalties to courts or regulators have the last charge against assets.

Canada's deposit insurer, the Canada Deposit Insurance Corp., insures deposits up to $100,000 in value, and pays depositors directly for any losses when a financial institution collapses. CDIC then becomes a claimant on a financial firm's assets on behalf of all insured depositors, ranking alongside uninsured depositors and deposit note holders, Mr. Selot said in his research note.

Home Trust has faced a run on deposits in high-interest savings accounts, most recently reporting on Monday that deposits were down to $391-million, an 80-per-cent drop from $2-billion at the end of March. The company has not provided a further update since Monday.

Home Trust's GIC balances have declined only slightly, according to Monday's update, but most of the GICs are not cashable and cannot be redeemed before maturity except in the event of the holder's death.

The company, which declined to comment on Thursday, has not offered an update on its deposit notes in its recent statements.

Also Thursday, lawyers representing Home Capital and three current and former employees made their first appearance at the Ontario Securities Commission. The regulator unveiled allegations in April that the company made misleading disclosures to investors about an internal investigation into mortgage underwriting problems.

OSC lawyers at the hearing pushed to expedite proceedings and hold the main hearing on the merits of the case by mid-July.

But lawyers for Home Capital and executives said the time frame was unrealistic, given that the OSC plans to call up to 10 witnesses and they must review thousands of documents. The commission plans to disclose its witnesses in the latter half of May.

After that time, Home Capital's lawyer Peter Howard said they could "intelligently talk about how long the hearing will be."

The OSC, Home Capital and the executives agreed to hold a second preliminary hearing June 2. 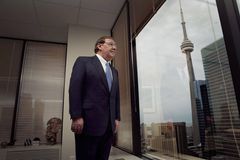 Home Capital: OSC right to make a mountain out of molehill
Subscriber content
May 3, 2017
Follow Janet McFarland and Rachelle Younglai on Twitter @JMcFarlandGlobe @rachyounglai
Report an error Editorial code of conduct
Due to technical reasons, we have temporarily removed commenting from our articles. We hope to have this fixed soon. Thank you for your patience. If you are looking to give feedback on our new site, please send it along to feedback@globeandmail.com. If you want to write a letter to the editor, please forward to letters@globeandmail.com.
Comments