An independent report done for Home Capital Group Inc. found that company managers were inattentive to the risks of mortgage fraud – and ignored warnings from regulators and industry partners – even as mortgage brokers were submitting loan applications with phony information to the firm.

Home Capital's board commissioned the review, a draft copy of which was obtained by The Globe and Mail. It was performed by audit firm KPMG in early 2015 after Home Capital, in part alerted by an external whistle-blower, discovered problems in its loan portfolio. The company ultimately suspended 45 brokers who had been responsible for facilitating $960-million in loans in 2014; after their departure, the company's loan volumes dropped.

The KPMG report outlines in detail the deep internal problems that nearly led to the unravelling of Home Capital, the country's largest provider of mortgages to borrowers who cannot qualify for them from the major banks.

It was the firm's decision in early months of 2015 not to publicly disclose its internal investigation and the financial impact of the dismissed brokers that caused the Ontario Securities Commission to launch an investigation. That probe led to formal allegations, laid out by the OSC this past April, that the company and three former senior executives had breached securities laws by making false and misleading statements to the public about why it was making fewer loans.

The OSC case contributed to a dramatic "run on the bank" this spring that saw Home Capital lose nearly $2-billion in deposits in short order. By early May, the firm was on the edge of collapse. In an attempt to survive, Home Capital has replaced much of its upper management, recruited new board members, reached a settlement on the OSC charges and a related shareholder lawsuit, and attracted new investment from Warren Buffett's Berkshire Hathaway Inc. The company has begun to see new inflows of money from depositors, leading many to conclude, as one analyst recently put it, that Home Capital has "weathered the storm." After the Buffett news in June, the shares rose to nearly $21, having quadrupled from their May low of $5.06.

Since then, they have pulled back by about one-third, closing on Friday at $13.76 in Toronto. The shares traded for more than $55 in 2014, before the extent of its internal problems were known.

The 2015 KPMG report reveals a company that had widespread weaknesses with financial controls and compliance. It says that Home Capital had inadequate processes to conduct due diligence on its borrowers; a management committee charged with evaluating credit risk failed to discuss multiple issues; and the company didn't inform employees about warnings from regulators of fraud in the industry.

Home Capital said in December, 2008, that it would install a new SAP computer system, and announced in July, 2011, it had "successfully [gone] live" with SAP. The KPMG report, however, reveals it delayed implementation of key elements of the program for cost reasons – then turned off its legacy platform before the SAP system was fully functional.

The end result, the KPMG report says, was that "underwriting processes were without either automated controls or effective system support for years, and the oversight functions in turn lacked reliable and timely monitoring data."

The KPMG report also says Home Capital failed to focus on money-laundering risks. The Globe and Mail reported in June that Home Trust, the company's main operating subsidiary, was put under heightened scrutiny by the Office of the Superintendent of Financial Institutions two years earlier, in June, 2015, because of faulty money-laundering and anti-terrorist financing controls.

In a written response to The Globe's questions about the KPMG report, Bonita Then, Home Capital's interim president and chief executive officer, said last week: "As we have previously reported, the company made changes to its internal control functions. At this time, the company has substantially completed the changes to its processes and controls and is confident it is well positioned for the future." (The company's new CEO, Yousry Bissada, took the reins later in the week, while Ms. Then remains on the board of directors.)

KPMG did not respond to a request for comment.

Home Capital declined any further comment to The Globe, but addressed the 2014-15 situation on a conference call with analysts and investors on Thursday. Interim chief financial officer Robert Blowes, who also served as CFO during 2014, said the company was "a victim of some problems" that year.

After a question from analyst Jaeme Gloyn of National Bank Financial Inc. about the use of the word "victim" and whether the OSC had identified some "learned behaviours" that contributed to the problem, chief operating officer Christopher Whyte said the company's entire mortgage origination and underwriting process "has effectively been reorganized." Home Capital no longer gives volume incentives to staff responsible for loan decisions, he said, "they are incented on quality of the work that they do."

KPMG's report says that "the root cause" of the internal weaknesses that allowed the mortgage documentation fraud to occur was "the company's focus on collateral at the expense of other risk criteria," such as its customers' capacity to repay. In other words, staff inside the company were mostly concerned with value of the property against which the mortgage was held, and less worried about the quality of the borrowers.

It says contributing factors included "an aggressive growth strategy" that prevented the "appropriate prioritization" of risk controls. "Given this undue focus on sales targets, broker relations enjoyed preferential treatment and were allowed to function without adequate governance and responsiveness to independent oversight." The report states that mortgage officers received daily e-mails reminding them of their personal targets.

KPMG cited numerous examples of the breakdown at Home Capital:

Another part of Home Capital's problem was how it dealt with its technology issues, which resulted in what KPMG termed "manual processes and no controls since 2011."

When the cost of implementing SAP rose to $50-million – the original estimate was "significantly lower," KPMG said – Home Capital responded by purchasing multiple systems to fill gaps, but they didn't communicate with each other, leaving broker-level data inaccurate or incomplete.

Some calculations were made in Microsoft Excel, while other files were paper-only during the underwriting process. Data was poor or delayed.

Then, Home Capital turned off its legacy computing system before SAP was fully implemented. The report is silent on why this was done.

As part of its analysis, KPMG reviewed 28 Home Capital mortgage files from 2015 – a very small slice of the thousands of mortgages the company made – and found problems in 21, or three-quarters of the sample. Some files had multiple issues. The files came from the entirety of Home Capital's operations, and were not limited to mortgages made by the suspended brokers.

In four cases, funding of the mortgage seemed to have been approved before all the necessary documentation was in the loan file. In three other cases, documents were undated, so KPMG couldn't be sure the file was complete in time. In four files, documents were collected more than five months after the loan was funded.

In eight files, "down payment verification would likely not meet regulatory requirements," KPMG said. In three others, there were anti-money-laundering issues "which were not flagged and investigated."

Some market participants will likely see the KPMG report as old news, more evidence of a problem that is in the company's rear-view mirror. However, the company is still under scrutiny from short-sellers who argue that it is susceptible to further problems in its mortgage book – as well as a potential decline in the Greater Toronto real estate market.

"All along, they've led people to believe this was the work of 45 rogue brokers. All along, they said it had nothing to do with the quality of the loans. All along, they said they'd fixed the problem," said short-seller Marc Cohodes, who points out that Ms. Then, the chair of the company's risk and capital committee at the time, and Mr. Blowes, the CFO, are still in positions of authority.

"The entire narrative to this day is that it has nothing to do with anything internal … No, it was internal to the company." 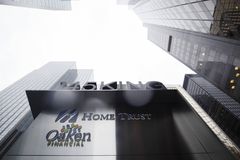