Oil prices are sinking, the stock market plunging and energy companies slashing jobs and investment, but analysts predict Canada's housing market is on track for a soft landing in 2015, not the crash many had expected.

Several reports released Wednesday call for housing markets such as Calgary, Regina and Winnipeg to cool, but not collapse, with markets such as Toronto benefiting from lower prices at the pumps that could spur hiring and boost consumer confidence.

Prices fell for a second successive month in December, down 0.2 per cent from a month earlier, according to the Teranet-National Bank National Composite House Price Index. House Prices typically dip in the winter, and December's drop appeared "unseasonably modest," wrote David Madani of Capital Economics, who has long predicted a housing crash.

The housing market is coming off a banner year in 2014, when prices rose 4.9 per cent nationally, the strongest growth in three years. That's set to slow to 2.9 per cent this year, according Royal LePage Ltd. A forecast by Fitch Rating yesterday called for more modest 2.5-per-cent growth.

But a soft landing is a far cry from the devastation that some had predicted since oil began its downward slide late last year. The forecasts of house price stability come even as central banks in Canada and the U.S. are warning of the risk that lower crude prices will mean to their economies and despite a growing consensus among economists that interest rates likely will rise later this year or in 2016.

The correction has already begun in most cities across Canada, says Phil Soper, chief executive officer of Royal LePage. Yet, the drop in oil prices will make for winners and losers. In particular, Ontario and Quebec stand to gain from cheaper prices at the pumps, which will help boost the bottom lines of both consumers and businesses. Toronto will lead the country for price growth thanks in part to pent-up demand from buyers who lost out in bidding wars in last year's strong market, he said. "The party in Toronto will last a little bit longer before we see a correction in home prices."

At the other end of the spectrum is Calgary, where the downturn in the energy sector has pushed many buyers and sellers into "a wait-and-see scenario," said Calgary Real Estate Board chief economist Ann-Marie Lurie. Prices in Calgary essentially will be flat this year, growing just 1.58 per cent, down from 9.85 per cent last year, the board predicts.

But Ms. Lurie said it's unlikely the city will see a repeat of the crash of 2009, when it lost more than 20,000 jobs amid a double whammy of a financial crisis and a drop in oil prices. Both housing supply and prices in Calgary have grown much slower in the aftermath of the recession, with prices rising by about 8 to 9 per cent a year, compared to 30 to 40 per cent in the lead-up to the financial crisis. At the same time, the real estate board is working off expectations that oil prices will recover toward the end of this year, although not back to historic highs.

"We've been through this scenario before. We've seen oil prices move up and move down," she said. "Until people start losing their jobs in vast numbers, there's a different story. [Buyers] might sit back and wait, but that doesn't mean there's outright panic at this point."

While oil sands companies have been slashing jobs in recent weeks as new investments gets shelved, most of those jobs cuts have been to future hiring, not current employment, Royal LePage's Mr. Soper said.

Others expect the damage to be more severe. Slumping oil prices have only heightened the risk of a housing correction, writes Capital Economics' Mr. Madani. "The upshot is that the housing bubble is only getting worse."

Big house gains may be taxable for Americans living in Canada
January 12, 2015 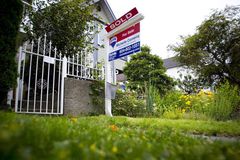