Ontario has been at the epicentre of factory closings in recent months, so it's little wonder that a major announcement about new jobs drew significant attention.

Cisco Systems Inc. said last week it will invest up to $4-billion in bolstering its research-and-development hubs in the province, a move that could, in the next six years, add as many as 1,700 new high-tech jobs. The Ontario government – which is kicking in up to $190-million for the first phase – trumpeted it as the largest-ever investment in the province's tech sector.

Cisco executives sat down with the Globe and Mail to discuss why they chose Canada, the potential for venture capital funding and the importance of a downtown presence in attracting talent. They are Nitin Kawale, president of Cisco's Canadian operations; Kelly Ahuja, general manager of its mobility group; and Robert Lloyd, president of development and sales. Mr. Lloyd, a native of Winnipeg, is the highest-ranking Canadian at the technology company and is considered a candidate to one day replace John Chambers as chief executive officer.

Here are their comments, which have been condensed and edited:

Q: How did this agreement come about?

Nitin Kawale: We announced [a] pilot project in 2011 so we probably started working on this maybe 18 months prior to that.

Robert Lloyd: In 2009...John [Chambers] and I came up here and met with the [economic development] minister. He had lots of great things to say about Ontario and Canada. He's been holding out the tax policy and the policies for encouraging consistent, supportive government with Canada as the model. John believes Canada is a role model for how supportive governments should position tax policy and encourage consistency. And then we find a very educated and loyal work force here, which isn't the same everywhere – especially the nature of loyalty that Canadians seem to have, they're not so transient.

Kawale: We signed the memorandum of understanding in August, 2011, that was the first 300 jobs. And we treated that as a pilot – and it worked. So now we're here today.

Q: What worked about it?

Kawale: We had made some assumptions in terms of being able to attract and retain talent. And it was exactly as designed. As we went to the universities, as we looked at the talent we needed to get to, it was good.

Lloyd: Kelly can hire people anywhere around the world ... The essence of our strategy from a development perspective is we have to have hubs. You have to have a development hub, you have to be able to build a big-enough momentum there that engineers are excited and energized and that there's enthusiasm. The first hub we had was in Kanata, it was in processor development ... if you create a hub in a development environment, then it builds. And if that product line and that technology continues to grow, that's a hub.

Q: How important, on a global scale, will these new R&D hubs in Canada be to the company?

Lloyd: Very. We have a global development location plan that we review every year. It's vitally important, because if you're not a hub, we're going to do sales and engineering, we might do some support work, services – but you won't have the R&D jobs, which are the true engineering jobs, which we know for a fact actually create an ecosystem around them ... other jobs get created around them.

Silicon Valley is one massive ecosystem, it feeds off universities, venture capital and risk-taking ... so you get the big employers there and around the big employers come smaller startups and companies. We actually think that is what the government here recognized – this is a good thing for both of us, but it creates an ecosystem around it. And it will happen, that's just the way it goes.

Our view is that in Canada, you don't yet have the same venture-capital experience and environment that exists in the United States, or Israel, and now actually in the U.K. If you look at those three, we would say that the VC market has really got itself figured out in the U.K. This is one of the gaps that I think exists in Canada.

We have $2-billion of just cash invested in small companies. And that's actually one of the largest VCs in the world. And we put a little bit of equity here or an expansion here ... over time, this is a thing that we think Canada needs to have – a little bit of a collaborative effort to up the VC industry.

Kawale: ... Stay tuned in the new year. Rob just talked about us being one of the largest VCs in the world, we want to continue that kind of activity in Canada.

Lloyd: [Canada] will be one of our top five countries for R&D in the world.

Q: What is the process behind deciding where to build an R&D centre?

Lloyd: ...Increasingly, in a world where projects need to be highly collaborative to improve productivity, you have to have people working together in different locations ... three hours' difference from San Jose is easier than 12.5 hours. And from a quality-of-life perspective, it's easier to collaborate north-south than it is east-west [in terms of] time zones. When you look at productivity, sometimes the productivity of getting work done in the North American time zone is easier than the Asian and Pacific time zone.

We did it because it's the right blend of costs, skills and favourable, supportive and predictable government. We don't like places that are volatile.

Q: Where will these new jobs be?

Kawale: There will be jobs in Kanata and Toronto, and then we'll grow. Those are natural for expansion, but I don't think we've ruled anything in or out.

We'll be hiring a lot of graduates, both undergraduates and Master's graduates, not only from Ontario universities but from across the country. This is exciting, given what's happened with youth unemployment.

Lloyd: We're expanding our footprint in downtown Toronto. The people that we're hiring right now want to live in a city. The space we're taking [in Toronto] is going to allow for those kinds of engineers who want to live and work in the city, take the subway ... that's the new work force. They don't want to drive up the 407. They want to live an urban lifestyle.

Kawale: We're going to have 108,000 square feet, four floors and an innovation centre, on Queen's Quay, with some expansion capabilities. We worked really hard to get this downtown location because we can see the demographic shift occurring.

Q: What exactly is the commitment to the Ontario government?

Kawale: It's a framework agreement. It allows us, in the first phase, to add up to 1,700 jobs. Depending on how many jobs we add, there's a sliding scale. Our goal is to hit those targets. In phase two, both parties can opt in or out of, that would take us up to 5,000 jobs if we complete the whole thing. [Cisco has about 1,500 employees in Ontario right now.]

Q: Why do you need a provincial contribution?

Lloyd: We operate in a free labour market – we just go where the talent is and have the best environment. The move by the Ontario government makes it extremely easy for our engineering team in a free market to take advantage of the talent, the predictability for us to build a work force here in a good tax environment. 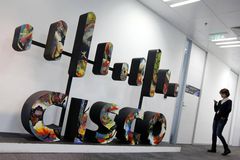