Hudson's Bay Co. is taking a page from its past.

Its namesake department-store chain is launching toy departments in about 60 of its 90 outlets this month after having ditched the category almost a decade ago in favour of higher-margin fashions.

But as retailers battle to boost their clothing businesses, they are looking for new ways to nab shoppers. Hudson's Bay is rolling the dice in the toy aisle to get a lift in a category that has enjoyed a sales bounce in recent years, helped by hot Star Wars toys and higher prices to offset heftier import costs.

Related: Retail reckoning: Why the apparel market is facing a sea of change

The foray by Hudson's Bay into toys is aimed at attracting a wider demographic of shoppers – children, parents and grandparents – to generate "incremental" business, Liz Rodbell, president of Hudson's Bay, said in an interview.

"It's the right thing to do in building our every-generation strategy," she said.

Toronto-based HBC is stepping back into the toy field at a time when it is getting more crowded amid the rise of heavyweight digital rivals led by Amazon.com Inc., whose low-cost model puts pressure on all players' profit margins.

And Indigo Books & Music Inc. has made a big push into toys. Now Hudson's Bay is entering the fray.

"We look at every one of these players coming in," said Humphrey Kadaner, president of Mastermind Toys, the country's largest specialty chain.

While sales in the roughly $1.8-billion Canadian toy market rose by about 7 per cent last year, helped by inflation and heavy store-closing sales at the failed Target Canada, this year's overall toy business so far has been flat, according to researcher NPD Group.

Hot properties such as Star Wars, Shopkins and Paw Patrol have played a part in spurring growth, NPD said. Almost one-third of toy sales are driven by products based on movies, television shows or digital brands, its research has found.

Fashion retailers, for their part, feel the heat of a "hyper-competitive" market amid the recent expansion of chains such as Nordstrom, pushing incumbents to seek new ways to make gains, said Michelle Liem, toy analyst at NPD.

"Given the strong growth of the Canadian toy industry, it is not surprising to see retailers gravitating toward the space," Ms. Liem said.

Still, toys are not an easy play. Their sales ebb and flow based on fickle consumer tastes, industry observers say. Profit margins of toys overall are just over 35 per cent compared with closer to 50 per cent for fashion and home-goods lines, Mr. Kadaner said.

Retailers try to lure customers with exclusive products. Mastermind doesn't count on hits of the season but rather unusual finds, he said. The privately held chain has expanded from 11 stores in 2011 to 46 today with plans for 80-plus in a few years, he said.

Indigo helped raise its toy profile by striking a deal with Mattel-owned American Girl a few years ago to stock the dolls in its stores.

Indigo has enjoyed double-digit toy sales growth over the past year or so, said Kirsten Chapman, chief marketing officer at Indigo. It is holding more children's events (such as making personalized books) at its stores to try to make them a "happy place" destination, she said.

"As others get into this crazy market – and we're not even close to seeing what is happening in the U.S. – we will continue to focus on … being differentiated," Ms. Chapman said.

Toys "R" Us Canada has been racing to feature "first-to-market" products and in-store shops of major brands, such as Fisher-Price, Lego and Barbie, said Clint Gaudry, vice-president of marketing and store planning. This year the chain is bulking up on teen and tween merchandise, such as drones, karaoke machines and jewellery, to make up for declining sales of video games and software, he said.

Hudson's Bay is focusing on what it calls a curated specialty-toy offering of more than 40 brands including Lego, Star Wars, Barbie and Melissa & Doug. The retailer is cashing in on the toy expertise of HBC's recently acquired German-based Galeria Kaufhof retailer, Ms. Rodbell said. HBC is also capitalizing on the toy savvy of Jerry Storch, its chief executive officer who previously headed Toys "R" Us.

Ms. Rodbell predicted shoppers who come to Hudson's Bay for toys also will shop in other departments. If toys are a hit, they will be expanded to U.S. sister chain Lord & Taylor, she said. The two chains, along with HBC's Home Outfitters, have enjoyed sales increases at existing stores over the past year but sales growth has been slipping.

In the past, HBC stocked toys at its former discounter Zellers, prompting it to drop the category at Hudson's Bay. "There is a sizable space for us," Ms. Rodbell said. 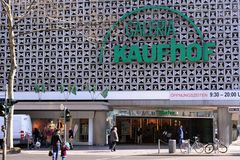